Advent of the Europeans

After the capture of Constantinople by the Turks in A.D. (C.E.) 1453, the land route between India and Europe was closed.

Advent of the Europeans

After the capture of Constantinople by the Turks in A.D. (C.E.) 1453, the land route between India and Europe was closed. The Turks penetrated into North Africa and the Balkan Peninsula. It became imperative on the part of the European nations to discover new sea routes to the East.

Amongst the entire European nations Portugal was the foremost to make a dynamic attempt to discover a sea route to India. Prince Henry of Portugal, who is commonly known as the “Navigator”, encouraged his countrymen to take up the adventurous life of exploring the unknown regions of the world. Bartholomew Diaz, a Portuguese sailor reached the southern-most point of Africa in 1487. He was patronized by the King John II. 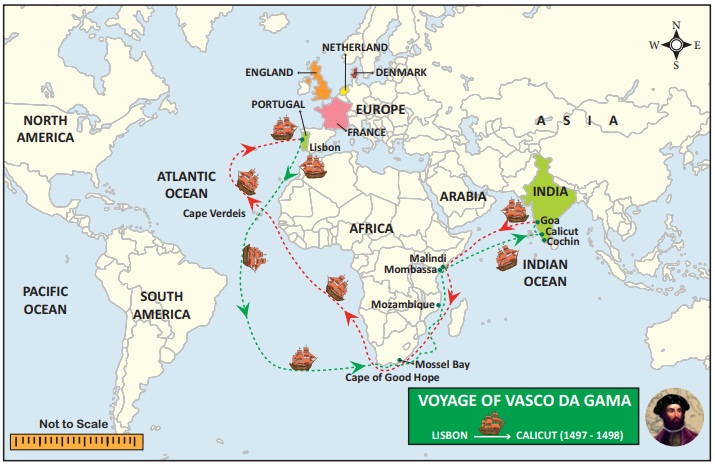 Vasco da Gama, another Portuguese sailor reached the southern-most point of Africa and he continued his journey to Mozambique from where he sailed to India with the help of an Indian pilot. 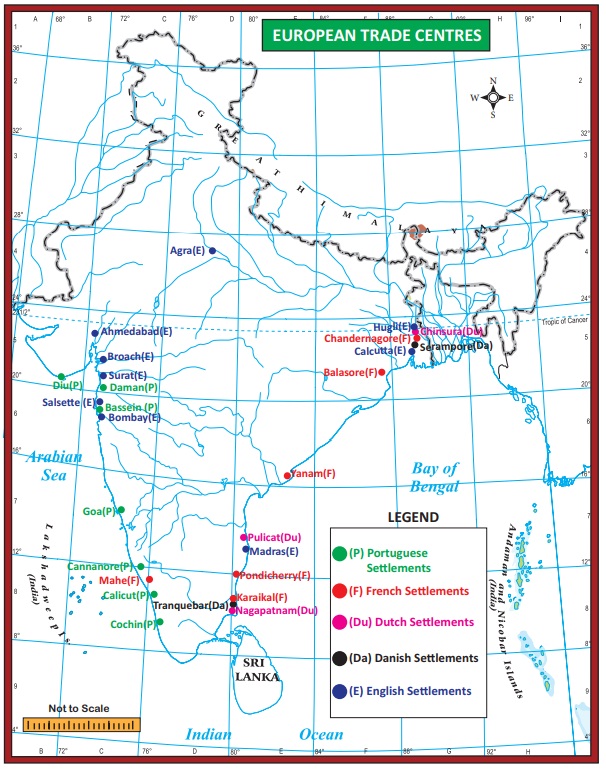 In A.D. (C.E.) 1498, he reached Calicut, where he was cordially received by King Zamorin, the ruler of Calicut. A second Portuguese navigator, Pedro Alvares Cabral, sailed towards India, following the route discovered by Vasco da Gama with 13 ships and a few hundred soldiers in 1500. On his arrival at Calicut, there arose conflicts between the Portuguese and king Zamorin. 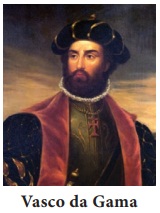 Vasco da Gama came to India for the Vasco da Gama second time in 1501 with 20 ships and founded a trading centre at Cannanore. One after another, they established factories at Calicut and Cochin. King Zamorin attacked the Portuguese in Cochin, but was defeated. Cochin was the first capital of the Portuguese East India Company. The third voyage of Vasco da Gama was in 1524. He soon fell ill, and in December 1524 he died in Cochin.

In 1505, Francisco de Almeida was sent as the first Governor for the Portuguese possessions in India. Almeida had the aim of developing the naval power of the Portuguese in India. His policy was known as the “Blue Water Policy”.

As Portuguese tried to break the Arab's monopoly on Indian Ocean trade, it negatively impacted on the trade interests of Egypt and Turkey. Sultans of Bijapur and Gujarat were also apprehensive of the expansion of Portuguese control of ports which led to an alliance between Egypt, Turkey and Gujarat against Portuguese invaders. In a naval battle fought near Chaul, the combined Muslim fleet won a victory over the Portuguese fleet under Almeida’s son who was killed in the battle. Almeida defeated the combined Muslim fleet in a naval battle near Diu, and by the year 1509, Portuguese claimed the naval supremacy in Asia.

The real founder of the Portuguese power in India was Alfonso de Albuquerque. He captured Goa from the Sultan of Bijapur in November 1510. In 1515, he established the Portuguese authority over Ormuz in Persian Gulf. He encouraged the marriages of the Portuguese with Indian women. He maintained friendly relations with Vijayanagar Empire.

Governor Nino de Cunha moved capital from Cochin to Goa in 1530. In 1534, he acquired Bassein from Bahadur Shah of Gujarat. In 1537, the Portuguese occupied Diu. Later, they wrested Daman from the local chiefs of Gujarat. In 1548, they occupied Salsette.

Thus during the 16th century, Portuguese succeeded in capturing Goa, Daman, Diu, Salsette, Bassein, Chaul and Bombay on the western coast, Hooghly on the Bengal coast and Santhome on the Madras coast and enjoyed good trade benefits. The Portuguese brought the cultivation of tobacco to India. Due to the influence of Portuguese Catholic religion spread in certain regions on India’s western and eastern coasts. The printing press was set up by the Portuguese at Goa in 1556. A scientific work on the Indian medicinal plants by a European writer was printed at Goa in 1563. In 17th century, the Portuguese power began to decline to the Dutch and by 1739 the Portuguese pockets became confined to Goa, Diu and Daman.

The Dutch followed the Portuguese into India. In 1602, the United East India company of Netherlands was formed and it received the sanction of their government to trade in East India. After their arrival in India, the Dutch founded their first factory in Masulipatnam, (Andhra Pradesh) in 1605. This company captured Amboyna from the Portuguese in 1605 and established its supremacy in the Spice Islands. They captured Nagapatnam near Madras from the Portuguese and made this place as their strong hold in South India. At first, Pulicat was their headquarters. Later, they shifted it to Nagapatnam in 1690.

The most important Indian commodities traded by the Dutch were silk, cotton, indigo, rice and opium. They monopolized the trade in black pepper and other spices. The important factories in India were Pulicat, Surat, Chinsura, Kasim bazar, Patna, Nagapatnam, Balasore and Cochin.

The English East India Company remained engaged in rivalry with the Portuguese and the Dutch throughout the 17th century. In 1623, the Dutch cruelly killed ten English traders and nine Javanese in Amboyna. This incident accelerated the rivalry between the two Europeans companies. Their final collapse came with their defeat by the English in the Battle of Bedera in 1759. The Dutch lost their settlements one by one to the English and was completely wiped out by the year 1795.

The Portuguese who established a control over Pulicat since 1502 were over thrown by the Dutch. In Pulicat, the Dutch built the fort Geldria in 1613. This fort was once the seat of Dutch power. 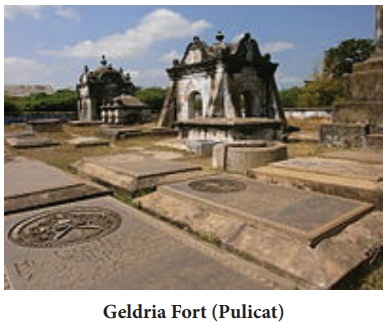 The Dutch established their settlement at Pulicat in 1610. Diamonds were exported from Pulicat to the western countries. The other Dutch colonial forts and possessions were Nagapattinam, Punnakayal, Porto Novo, Cuddalore and Devanampatinam.

On 31st December 1600, Elizabeth, the Queen of England granted a charter to the governorandcompanyofMerchantsofLondon to trade with East Indies. The Company was headed by a Governor and a court of 24 directors. Captain Hawkins visited Jahangir’s court in 1608 to get certain concessions for the company. He secured permission to raise a settlement at Surat. However, the Emperor cancelled the permission under pressure from the Portuguese.

In 1612, the English Captain Thomas Best, inflicted a severe defeat over the Portuguese in a naval battle near Surat. The Mughal Emperor Jahangir permitted the English to establish their factory in 1613 at Surat, which initially became the headquarters of the English in western India. Captain Nicholas Downton won another decisive victory over the Portuguese in 1614. These events enhanced the British prestige at the Mughal court. In 1615, Sir Thomas Roe was sent to Jahangir’s court by King James I of England. He remained at Agra for three years and succeeded in concluding a commercial treaty with the emperor. Before the departure of Sir Thomas Roe, the English had established their trading centres at Surat, Agra, Ahmadabad and Broach.

On the coastline of the Bay of Bengal, the English established their first factory in 1611 at Masulipatam, an important port in the territory of the kingdom of Golconda. In 1639, the English merchant, Francis Day, obtained Madras as a lease from Chennappa Nayaka, the ruler of Chandragiri. The East India Company built its famous factory known as 'Fort St. George' in Madras, which became their headquarters for the whole of the eastern belt and first fort built by British.

King Charles II of England received the island of Bombay as a part of his dowry from the Portuguese King, on the occasion of his marriage with Catherine. In 1668, the East India Company acquired the island at an annual rent of £ (pounds) 10 from Charles II.

In 1690 a factory was established at Sutanuti by Job Charnock. The Zamindari of the three villages of Sutanuti, Kalikata and Govindpur was acquired by the British in 1698. These villages later grew into the city of Calcutta. The factory at Sutanuti was fortified in 1696 and this new fortified settlement was named as ‘Fort William’ in 1700.

After the Battle of Plassey in 1757 and the Battle of Buxar in 1764, the Company became a political power. India was under the East India Company’s rule till 1858 after it came under the direct administration of the British Crown.

On March 17, 1616 the King of Denmark, Christian IV, issued a charter and created a Danish East India company. They established settlement at Tranquebar (Tamilnadu) in 1620 and Serampore (Bengal) in 1676. Serampore was their headquarters in India. They failed to strengthen themselves in India and they sold all their settlement in India to the British in 1845.

Danish called Tranquebar as Danesborg. The king of Denmark sent Ziegenbalg to India. Ziegenbalg set up a printing press at Tranquebar (Tarangambadi). 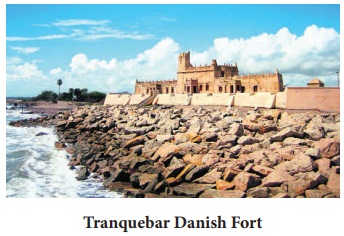 The French East India Company was formed in 1664 by Colbert, a Minister of King Louis XIV. In 1667, a French expedition came to India under Francois Caron. France was the last European country to come India as traders. Caron founded the first French factory in India at Surat. In1669, Marcara founded second French factory at Masulipatam by securing a patent from the Sultan of Golkonda. 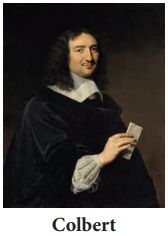 In 1673, the settlement of Pondicherry was founded by Martin under a grant from Sher Khan Lodi, the ruler of Bijapur. Pondicherry became the most important and prosperous French settlement in India. A fort known as St. Louis was built by Francois Martin in Pondicherry. In 1673, the French obtained permission from Shaista Khan, the Mughal Subedar (governor) of Bengal to establish a township at Chandranagore, near Calcutta.

The vision of the French power in India was further reinforced by the appointment of Joseph Francois Dupleix as the Governor of the French East India Company in 1742. He succeeded Dumas as the French governor of Pondicherry.