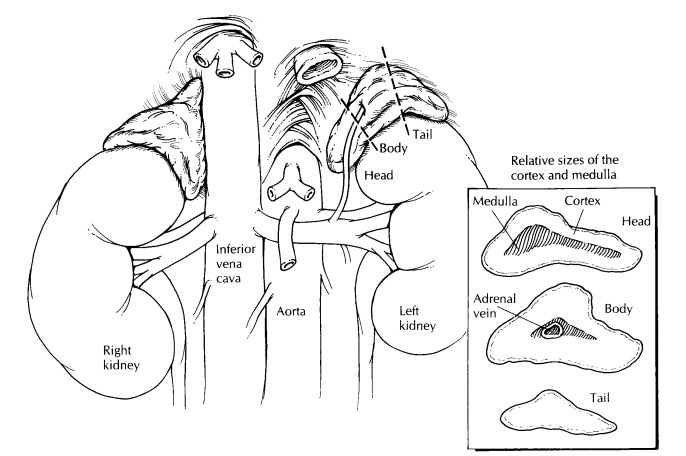 Adrenalectomies: Extrinsic hormonal influences and intrinsic pathologic processes have profound and predict-able effects on the size, color, and shape of the adrenal gland.

Extrinsic hormonal influences and intrinsic pathologic processes have profound and predict-able effects on the size, color, and shape of the adrenal gland. For example, the pathogenesis of hypercortisolism is frequently suggested by the size and color of the adrenal cortex, and the distinction between benign and potentially malignant cortical neoplasms is often based on the dimensions and weight of the tumor. There-fore, careful examination of the gross specimen plays an important role in recognizing and inter-preting pathologic processes involving the adre-nal gland.

A thorough evaluation of the specimen re-quires a certain familiarity with the anatomy and weight of the normal adrenal gland. As illus-trated, the right adrenal gland has the shape of a pyramid and the left adrenal gland the shape of a crescent. The average weight of each is ap-proximately 4 g in the adult. Weights of 6 g or more are abnormal. Specimen orientation is easily achieved by locating the concave surface of the specimen. This concavity is the point at which the adrenal abuts the ipsilateral kidney, and thus it represents the inferolateral aspect of the speci-men. The adrenal gland is considered a tripartite structure composed of a head, body, and tail. The head is the thickest and broadest portion of the adrenal and is situated most medially. The middle third represents the body. The thinnest and most lateral third represents the tail. Unlike the kidney, blood does not enter the adrenal at a single vascular pedicle. Instead, numerous small arteries pierce the cortex at multiple sites. Most of these vessels are too small to appreciate grossly. In contrast, the adrenal is drained by asingle vein. This vein exits the adrenal at the junction of the body and the head of the gland and is usually visible to the naked eye, especially when filled and distended by tumor. 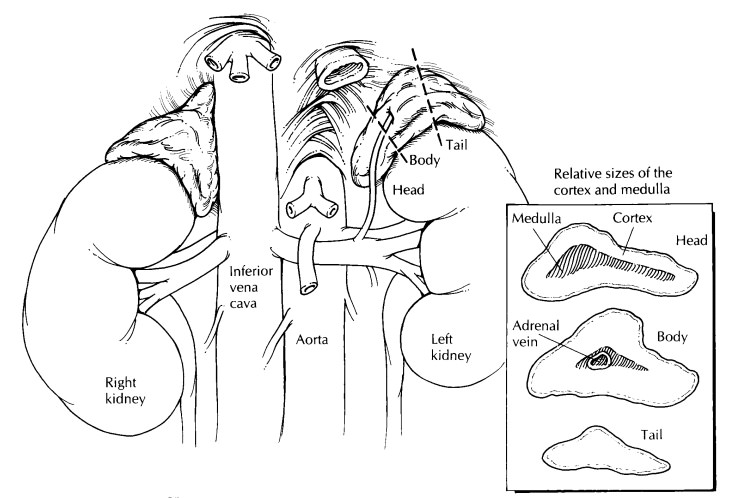 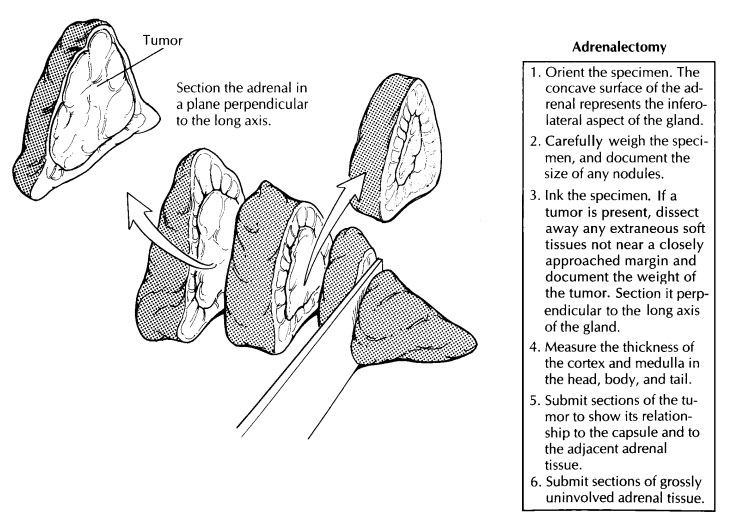 Examine the contours of the adrenal gland. Be sure to ink the soft tissues overlying any areas where tumor bulges from the surface of the adre-nal, since these areas represent soft tissue mar-gins. Look for and sample the adrenal vein. The entire specimen should then be measured and weighed. Distinguishing between a benign and malignant adrenal neoplasm is often done by weight. It is therefore critical that you accu-rately weigh the intact fresh specimen before it is fixed and before tissue is procured for additional studies. For tumors between 50 and 100 g we recommend that you carefully remove any extra-neous soft tissue not near margins closely ap-proached by the tumor before weighing. If the gland appears enlarged, determine and docu-ment whether this enlargement is due to a solitary mass, multiple nodules, or diffuse hyperplasia. Extended resections of primary adrenal tumors may also include portions of adjacent kidney, liver, and/or abdominal wall. The presence and appearance of these structures should be noted, and their relationships to the adrenal tumor should be described.

Unless otherwise indicated, the adrenal should always be sectioned in the transverse plane. This plane of sectioning optimizes evaluation of the relative sizes of the cortical and medullary com-partments. Serially section the adrenal gland at 2- to 3-mm intervals perpendicular to the long axis of the specimen. Keep in mind that al-though the adrenal gland is removed as a single structure, it is both structurally and function-ally compartmentalized into a steroid-secreting cortex and a chromaffin-positive medulla.

This compartmentalization will become most appar-ent when the adrenal is sectioned. The medulla is seen as an inner gray or white band confined mostly to the head of the adrenal. This central band is sharply demarcated from the outer yellow-brown cortex. The inner zone of the cortex is typically brown, while the outer zone of the cortex is often yellow. The inner zone corres-ponds to the lipofuscin-laden zona reticularis and the outer zone to the lipid-laden zona glomeru-losa and zona fasciculata. Measure and record the thickness of these compartments at three levels— the head, body, and tail. Remember to docu-ment the exact dimensions of any tumors and to record the appearance of the tumor’s cut surface: What is its color? Is it necrotic and/or hemor-rhagic? Is it encapsulated? Does it extend beyond the adrenal and into adjacent tissues?

Before the specimen is fixed in formalin, ask yourself if fresh tissue should be specially pro-cessed. For example, adrenal cortical neoplasms are sometimes evaluated for steroid content. Viable fresh tissue from these tumors can be snap frozen in liquid nitrogen and stored in a 2708C freezer for easy retrieval if tissue is laterneeded for biochemical analysis. Fresh tissues from adrenal medullary neoplasms have histori-cally been processed in dichromate fixatives (e.g., Zenker’s solution) to preserve cytoplasmic chro-maffin granules. Today, this practice has limited value because these same catecholamines can be more precisely characterized and quantified from the patient’s serum. Perhaps the strongest indica-tion for special tissue processing is if the tumor was resected from a young patient. For adrenal tumors from pediatric patients—where a primi-tive neuroblastic tumor is often suspected— fresh tissue should be set aside for cytogenetic, molecular (e.g., N-myc amplification), and ultra-structural analysis.

Sections from a tumor should be taken to de-monstrate the relationship of the tumor to the adrenal, to the tumor capsule, and to any associ-ated soft tissues and visceral organs. Do notforget to take sections from the surgical margins, including an appropriate margin from all struc-tures represented in the extended resection (e.g., abdominal wall, kidney) and from the per-iadrenal fat overlying a bulging tumor. Large adrenal tumors should be sampled to include all components contributing to its often variegated appearance on cut section. For the uninvolved adrenal gland and for specimens that do not have a discrete lesion, submit a representative section from the head, body, and tail. To best demonstrate the cortex and medulla, these sec-tions should be taken perpendicular to the long axis of the gland.

Regional lymph nodes will generally not be found in the specimen but may be separately submitted by the surgeon. Any lymph nodes that are present should, of course, be sampled for histologic evaluation.

Important Issues to Address in Your Surgical Pathology Report on Adrenalectomies

•      What procedure was performed, and what structures/organs are present?

•      What are the dimensions and weight of the adrenal gland?

•      For focal tumors: From which compartment (cortex or medulla) does the tumor appear to arise? What are the dimensions and weight of the tumor? Is the tumor benign, malignant, or of uncertain malignant potential? Does the tumor infiltrate vessels, the tumor capsule, and/ or the surrounding tissues? What is the status of the surgical margins? Has the tumor me-tastasized to regional lymph nodes? If so, how many lymph nodes were removed, and how many are involved by tumor?

•      For diffuse processes: Which compartment (cortex or medulla) is expanded? Is the com-partment uniformly enlarged, or is the enlarge-ment due to multiple nodules?