How to diagnose individuals with suicidal behavior who do not meet criteria for a specific mental is a challenge.

The Diagnostic and Statistical Manual of Mental Disorders, Fourth Edition, Text Revision (DSM-IV-TR) states that the essential fea-ture of adjustment disorder (AD) is the development of clinically significant emotional or behavioral symptoms in response to an identifiable psychosocial stressor (American Psychiatric Associa-tion, 2000). The symptoms must develop within 3 months after the onset of the stressor (criterion A). The clinical significance of the reaction is indicated either by marked distress that is in excess of what would be expected given the nature of the stressor or by signif-icant impairment in social or occupational (academic) functioning (criterion B). This disorder should not be used if the emotional and cognitive disturbances meet the criteria for another specific Axis I disorder (e.g., a specific anxiety or mood disorder) or are merely an exacerbation of a preexisting Axis I or Axis II disorder (criterion C). AD may be diagnosed if other Axis I or II disorders are present, but do not account for the pattern of symptoms that have occurred in response to the stressor. The diagnosis of AD does not apply when the symptoms represent bereavement (criterion D). By defi-nition, AD must resolve within 6 months of the termination of the stressor or its consequences (criterion E). However, the symptoms may persist for a prolonged period (i.e., longer than 6 months) if they occur in response to a chronic stressor (e.g., a chronic, dis-abling general medical condition) or to a stressor that has enduring consequences (e.g., the financial and emotional difficulties result-ing from a divorce) (American Psychiatric Association, 2000).

Although the above definition provides a certain structure for identifying and describing AD, there is still uncertainty as to when the impairment in functioning or the severity of the psychi-atric symptoms that develop in response to a stressor are suffi-cient to warrant a diagnosis of AD. The DSM-IV-TR describes the boundary issues between conditions that may be a focus of clini-cal attention (V codes), subthreshold disorders (NOS disorders) and the specific mental disorders (American Psychiatric Associa-tion, 2000). A compelling literature documents that there is much “physical” in mental disorders and much “mental” in physical dis-orders. No definition adequately specifies precise boundaries for the concept of a “mental disorder”. “The concept … lacks a con-sistent operational definition that covers all situations. Whatever its original cause, it must currently be considered a manifestation of a behavioral, psychological, or biological dysfunction in the in-dividual”. The issue of defining boundaries is especially problem-atic in the subthreshold diagnoses, for example, the AD, in which there are no symptom checklists, algorithms, or guidelines for the “quantification of attributes”.

The symptoms of AD are defined in terms of their being a maladaptive response to a psychosocial stressor. There are, in fact, no specific symptoms of AD; any combination of behavioral or emotional symptoms that occur in association with a stressor may qualify. The lack of specific symptoms or quantifiablecriteria of the AD permits the labeling of early or temporary men-tal states when the clinical picture does not meet full evidence for a more specific mental disorder, but the morbid state is more than expected in a normal reaction and treatment or intervention may be indicated. AD are an essential “linchpin” in the psychi-atric–taxonomic spectrum-hierarchy: 1) disorders with specific diagnostic criteria; 2) disorders not otherwise specified (NOS); 3) adjustment disorders; 4) other conditions that may be a focus of clinical attention (V codes) (American Psychiatric Association, 2000); and 5) normal fluctuations of mental states.

Disorders that do not fulfill the criteria for a specific mental disorder may be accorded a lesser interest by mental health care workers, research institutes and third-party payers, even though they present with serious (or incipient) symptoms that require intervention or treatment. Given this concept, the AD are formu-lated as a means of classifying psychiatric morbidity that is clini-cally significant; when the symptom profile is as yet insufficient to meet the more specifically operationalized criteria for another mental disorder; when the symptoms, disturbance of mood, and vocational or interpersonal dysfunction are in excess of a nor-mal reaction to the stressors in question; and for which treatment is indicated. For example, a diagnosis of AD is not given when the clinical picture is a psychosocial problem (V code) requiring clinical attention, such as noncompliance, phase of life problem, bereavement, or occupational (academic) problem. Their etio-logical and dynamic attributes make the AD a fascinating group of disorders that serve as a fulcrum between normality and more specific mental disorders (Figure 61.1).

Attention to less severe mental symptoms (and psychiatric morbidity) may forestall the evolution to more serious disorders and allow remediation before relationships, work and functioning are so impaired that they are disrupted or permanently sundered 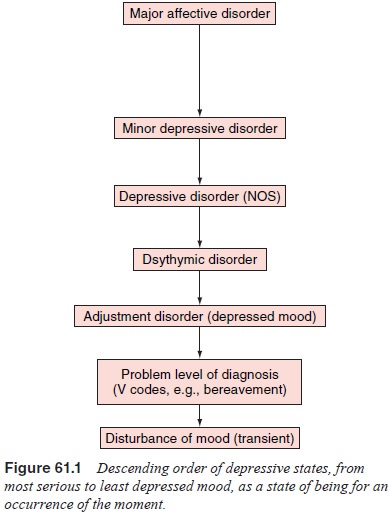 Yet, in the gray area in which early diagnosis may have enormous value with modest therapeutic investment, guidelines are the most tenuous. It is the professionals at the “front door” – primary care physicians, triage personnel, emergency department staff, walk-in clinic staff – who need assistance in making this difficult call: Is there sufficient psychiatric morbidity to warrant mental health intervention?

Because AD is a nonpejorative psychiatric condition it may have been overdiagnosed in youths to protect them from feared adversities of major psychiatric nomenclature. An early study ob-served that 25% of a sample of adolescents with AD had attempted suicide and that 17% probably “would have met DSM-III criteria for major depressive disorder” because they had the required symp-toms. Nevertheless, in psychological autopsy studies of adolescent suicide completers, approximately 20% do not meet the criteria for any single psychiatric diagnosis, although they present with significant functional impairment and life-threatening behavior.

How to diagnose individuals with suicidal behavior who do not meet criteria for a specific mental is a challenge. Runeson and colleagues (1996) observed from psychological autopsy methods that there was a very short median interval between first suicidal communication and suicide in AD (less than 1 month) compared with major depressive disorder (3 months), borderline personality disorder (30 months), or schizophrenia (47 months).

Recent life events, which would constitute an acute stress, were commonly found to correlate with suicidal behavior in a group that included those with AD (Isometsa et al., 1996). The as-sessment of suicidal behavior is an important tool in differentiating major depressive disorder, dysthymic disorder and AD. Further-more, AD patients appear to be among the most common recipients of a deliberate self-harm (DSH) diagnosis, with the majority in-volving self-poisoning. Thus, DSH with all its variants, e.g., reck-less driving, is more common in AD patients, whereas the percent-age of completed suicidal behavior per se was found to be higher in depressed patients (Spalletta et al., 1996). Of note, biological find-ings in suicidal patients with AD suggest characteristic patterns of monoamine oxidase (MAO) and noradrenaline turnover. Clearly, what is regarded, as a subthreshold diagnosis – AD – does not nec-essarily imply the presence of subthreshold symptomatology.