Routing is the act of moving information across the network from a source to a destination. It is also referred as the process of choosing a path over which the packets are sent.

Routing is the act of moving information across the network from a source to a destination. It is also referred as the process of choosing a path over which the packets are sent. The routing process usually directs forwarding on the basis of routing tables which maintain a record of the routes to various network destinations.

Routing is mainly classified into static routing and dynamic routing.

2. Dynamic routing refers to the routing strategy that is being learnt by an interior or exterior routing protocol. This routing primarily depends on the state of the network i.e., the routing table is affected by the activeness of the destination.

b) Routing in Mobile Ad-hoc Networks

networks, where the structure of the network changes dynamically. This is mainly due to the mobility of the nodes. Nodes in these networks utilize the same random access wireless channel, cooperating in an intimate manner to engaging themselves in multihop forwarding. The node in the network not only acts as hosts but also as routers that route data to / from other nodes in network.

In mobile ad-hoc networks there is no infrastructure support as is the case with wireless networks, and since a destination node might be out of range of a source node transferring packets; so there is need of a routing procedure. This is always ready to find a path so as to forward the packets appropriately between the source and the destination.

In infrastructure networks, within a cell, a base station can reach all mobile nodes without routing via broadcast in common wireless networks. In the case of ad-hoc networks, each node must be able to forward data for other nodes. This creates additional problems along with the problems of dynamic topology which is unpredictable connectivity changes.

i)             Asymmetric links: Most of the wired networks rely on the symmetric links which are always fixed. But this is not a case with ad-hoc networks as the nodes are mobile and constantly changing their position within network

ii)             Routing Overhead: In wireless ad hoc networks, nodes often change their location within network. So, some stale routes are generated in the routing table which leads to unnecessary routing overhead.

iii)             Interference: This is the major problem with mobile ad-hoc networks as links come and go depending on the transmission characteristics, one transmission might interfere with another one and node might overhear transmissions of other nodes and can corrupt the total transmission.

iv)            Dynamic Topology: Since the topology is not constant; so the mobile node might move or medium characteristics might change. In ad-hoc networks, routing tables must somehow reflect these changes in topology and routing algorithms have to be adapted. For example in a fixed network routing table updating takes place for every 30sec. This updating frequency might be very low for ad-hoc networks.

Classification of routing protocols in mobile ad hoc network can be done in many ways, but most of these are done depending on routing strategy and network structure. 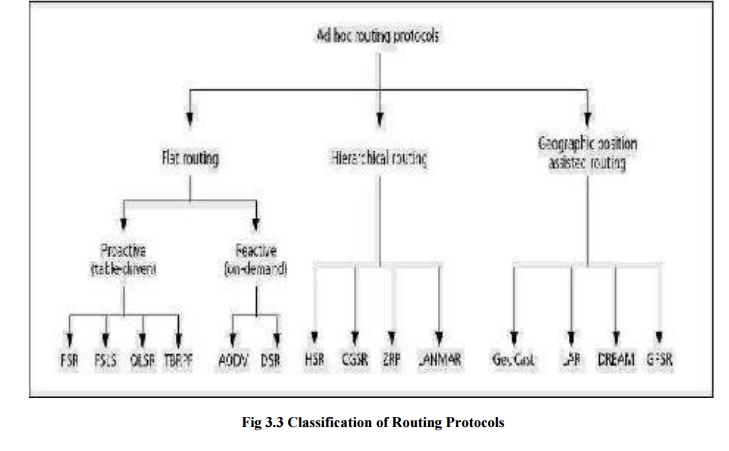 Based on the Routing Information Update Mechanism :

Ad hoc wireless network routing protocols can be classified into three major categories based on the routing information update mechanism. They are

2.     Reactive or On-demand routing protocols : Protocols that falls under this category do not maintain the network topology information. They obtain the necessary path when it is required by using connection establishment process. Hence these protocols do not exchange routing information periodically.

3.     Hybrid Routing Protocols : Protocols belonging to this cateogory combine the best features of above two categories. Nodes within a certain distance from the node concerned or within a particular geographical region are said to be within the routing zone of the given node. For routing within this zone, a table- driven approach is used. For nodes that are located beyond this zone is on-demand approach is used