Complement activation takes place through any of the following three pathways: 1. The classical pathway 2. The alternative pathway 3. The lectin pathway

Complement activation takes place through any of the following three pathways:

Of these, alternative and lectin pathways are important in the innate immunity of the host. These two are also more impor-tant when the human host is infected by a microorganism for the first time, because the antibody required to trigger the clas-sical pathway is not present.

The classical pathway is a chain of events in which complement components react in specific sequences as a cascade resulting in cell lysis. It is activated by antibody bound to antigen but never by native or free antibody. 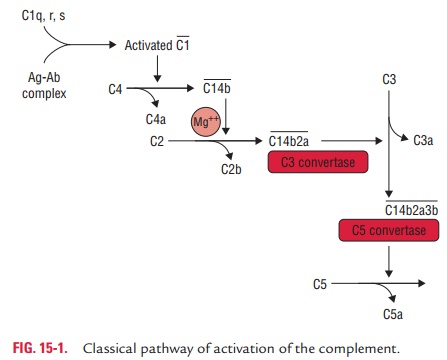 1.        Activation of C1 is the first step in the cascade of classical pathway activation. The C1 actually is a complex of three different types of molecules: C1q, C1r, and C1s. C1q first combines with the Fc portion of the bound antibody, IgM or IgG. This results in the sequential activation of C4, C2, and C3. For C1 to be activated, it must bind to at least two adjacent Fc regions. This means that the concentration of antibody of the IgG class must be relatively high and that the specific antigenic determinants recognized by the IgG antibody must be in close proximity. When pentameric IgM is bound to antigen on a target surface, it assumes the so-called stable configuration, in which at least three bind-ing sites for the C1q are exposed. Since IgG molecules have a lower valency, about 1000 of them are needed to ensure the initiation of the complement pathway as against only one IgM molecule.

2.        C1q binding in the presence of calcium ions leads to activation of C1r and C1s. Activated C1s is an esterase that splits C4 into two fragments: a small soluble frag-ment (C4a) and a larger fragment (C4b). C4a has ana-phylatoxin activity, and C4b binds to cell membrane along with C1. C4b in the presence of Mg21 splits C2 into C2a and C2b. The smaller fragment (C2b) diffuses away, while the larger fragment (C2a) remains attached to C4b. The resulting C4b2a complex possesses enzymatic activ-ity and is called C3 convertase, which converts C3 into an active form. 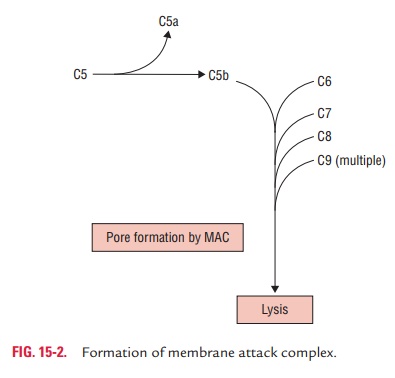 3.        The C3 convertase activate thousands of C3 molecules and splits these molecules into C3a and C3b. A single C3 convertase molecule can generate over 200 mol-ecules of C3b, resulting in tremendous amplification at this step of the sequence. The biological importance of activated C3b as well as C4b is that they are able to bind to C3b/C4b receptors (currently designated as CR1receptors) present on almost all host cells, most notablyphagocytes.

The increased affinity of phagocytic cells for C3b (or iC3b)/C4b-coated particles is known as immune adherence. The latter is responsible for a significant enhancement of phagocytosis, which is one of the main defense mecha-nisms of the body.

4.        Some of the C3b binds to C4b2a to form a trimolecu-lar complex C4b2a3b called C5 convertase. The C5 con-vertase splits C5 into C5a and C5b. C5a diffuses away, while C5b attaches to C6 and initiates formation of C5b–9 complex otherwise known as membrane attackcomplex (MAC).

Released C5b67 complexes can insert into the membrane of nearby cells and mediate “innocent-bystander” lysis. Regulator proteins in human sera normally prevent this from occurring, but in certain diseases cell and tissue damage may occur due to this process of innocent-bystander lysis.

The membrane-bound C5b–6–7 complex acts as a recep-tor for C8 and C9. C8, on binding to the complex, stabi-lizes the attachment of the complex to the foreign cell membrane. The C5b–8 complex acts as a catalyst for C9, which is a single chain glycoprotein with a tendency to polymerize spontaneously.

5.        The C5b–8 complex on binding to C9 molecules under-goes polymerization, which finally ends in the forma-tion of C5b–9 complex also known as MAC. The MAC forms a transmembrane channel of 100 Å diameter in the cell. This transmembrane channel allows the free exchange of ions between the cell and the surrounding medium. Due to the rapid influx of ions into the cell and their association with cytoplasmic proteins, the osmotic pressure rapidly increases inside the cell. This results in an influx of water, swelling of the cell, and, for certain cell types, rupture of the cell membrane and finally lysis (Fig. 15-3). 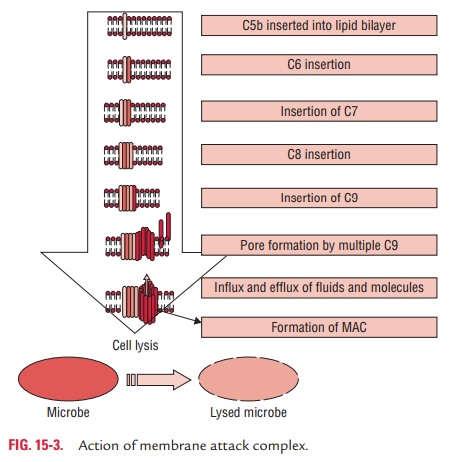 The alternative pathway was first described by Pillemer in 1954. It differs from the classical pathway in (a) the nature of activat-ing substances and (b) the sequence of events itself. The alter-native pathway is unique in not requiring antigen–antibody complexes to activate the complement. This pathway does not depend on antibody and does not involve the early complement components (C1, C2, and C4) for activation of the comple-ment. It, therefore, can be activated before the establishment of an immune response to the infecting pathogen (Fig. 15-4). 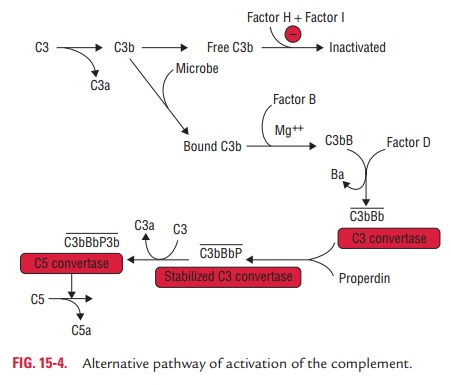 1.        The C3b binds with factor B to form C3bB complex. The interaction between C3b and factor B is stabilized by Mg21, which is the only ion required for functional activation of the alternative pathway. Therefore, tests to discriminate between the two complement activation pathways are often based on the selective chelation of Ca21 (to disrupt C1q, C1r2, and C1s2) and the addition of sufficient Mg21 to allow activation of the alternative pathway.

2.        The C3bB is split into two fragments, Ba and Bb, by another serum protein called factor D or C3 proactive convertase. Since factor D has never been isolated in its proenzyme form, it is generally believed to be activated immediately upon leaving the hepatocyte where it is synthesized. The Ba is released into the medium and the Bb binds to C3b form-ing the C3bBb complex, which possesses the C3 convertase activity.

3.        The C3bBb complex activates more C3, leading to the for-mation of more C3bBb, which in turn is capable of activat-ing C5 and the MAC. The C3bBb complex has a half-life of only 5 minutes, but by binding with properdin it forms PC3bBb complex, which is relatively heat stable.

4.        The alternative pathway then proceeds from C3 to produce finally the MAC, in the same way as occurs in the classical pathway.

The lectin pathway, as the name suggests, is triggered by lec-tins. Lectins are the proteins that recognize and bind to spe-cific carbohydrate targets. The mannose-binding lectin (MBL) is one such protein that takes part in the lectin pathway of complement activation. MBL is a large serum protein that binds to nonreduced mannose, fructose, and glucosamine on bacterial and other cell surfaces with mannose-containing polysaccharides (mannans) (Fig. 15-5). 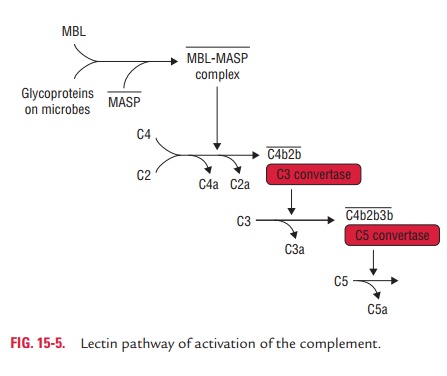 The binding of MBL to a pathogen results in the secretion of two MBL-associated serine proteases: MASP-1 and MASP-2. MASP-1 and MASP-2 are similar to C1r and C1s, respectively, and MBL is similar to C1q. Formation of the MBL/MASP-1/ MASP-2 trimolecular complex results in activation of MASPs and subsequent cleavage of C4 into C4a and C4b. Subsequently, it proceeds to produce MAC in the same way as that occurs in the classical and alternative pathways. Differences between classical, alternative, and lectin pathways are summarized in Table 15-1.