Occasionally, the heart or its associated blood vessels are malformed during fetal life; the defect is called a congenital anomaly.

The effects of the different stenotic lesions are easily understood. For instance, congenital aortic valve steno-sis results in the same dynamic effects as aortic valvestenosis caused by other valvular lesions, namely, a tendency to develop serious pulmonary edema and a reduced cardiac output.

Another type of congenital stenosis is coarctationof the aorta, often occurring near the level of thediaphragm. This causes the arterial pressure in the upper part of the body (above the level of the coarc-tation) to be much greater than the pressure in the lower body because of the great resistance to blood flow through the coarctation to the lower body; part of the blood must go around the coarctation through small collateral arteries.

During fetal life, the lungs are collapsed, and the elastic compression of the lungs that keeps the alveoli collapsed keeps most of the lung blood vessels col-lapsed as well. Therefore, resistance to blood flow through the lungs is so great that the pulmonary arte-rial pressure is high in the fetus. Also, because of low resistance to blood flow from the aorta through the large vessels of the placenta, the pressure in the aorta of the fetus is lower than normal—in fact, lower than in the pulmonary artery. This causes almost all the pul-monary arterial blood to flow through a special artery present in the fetus that connects the pulmonary artery with the aorta (Figure 23–4), called the ductus arterio-sus, thus bypassing the lungs. This allows immediaterecirculation of the blood through the systemic arter-ies of the fetus without the blood going through the 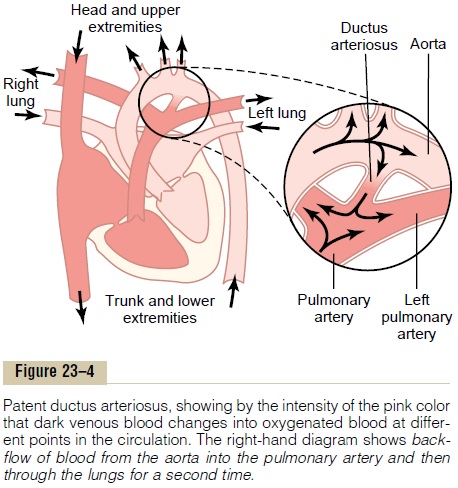 lungs. This lack of blood flow through the lungs is not detrimental to the fetus because the blood is oxy-genated by the placenta.

Unfortunately, in about 1 of every 5500 babies, the ductus does not close, causing the condition known as patent ductus arteriosus, which is shown in Figure 23–4.

Dynamics of the Circulation with a Persistent Patent Ductus.

During the early months of an infant’s life, a patent ductus usually does not cause severely abnormal func-tion. But as the child grows older, the differential between the high pressure in the aorta and the lower pressure in the pulmonary artery progressively in-creases, with corresponding increase in backward flow of blood from the aorta into the pulmonary artery. Also, the high aortic blood pressure usually causes the diameter of the partially open ductus to increase with time, making the condition even worse.

Diminished Cardiac and Respiratory Reserve. Themajor effects of patent ductus arteriosus on the patient are decreased cardiac and respiratory reserve. The left ventricle is pumping about two or more times the normal cardiac output, and the maximum that it can pump after hypertrophy of the heart has occurred is about four to seven times normal. Therefore, during exercise, the net blood flow through the remainder of the body can never increase to the levels required for strenuous activity. With even moderately strenuous exercise, the person is likely to become weak and may even faint from momentary heart failure.

The high pressures in the pulmonary vessels caused by excess flow through the lungs often lead to pul-monary congestion and pulmonary edema. As a result of the excessive load on the heart, and especially because the pulmonary congestion becomes progres-sively more severe with age, most patients with uncor-rected patent ductus die from heart disease between ages 20 and 40 years.

Heart Sounds: Machinery Murmur. In a newborn infantwith patent ductus arteriosus, occasionally no abnor-mal heart sounds are heard because the quantity of reverse blood flow through the ductus may be insuffi-cient to cause a heart murmur. But as the baby grows older, reaching age 1 to 3 years, a harsh, blowing murmur begins to be heard in the pulmonary artery area of the chest, as shown in recording F, Figure 23–3. This sound is much more intense during systole when the aortic pressure is high and much less intense during diastole when the aortic pressure falls low, so that the murmur waxes and wanes with each beat of the heart, creating the so-called machinery murmur. 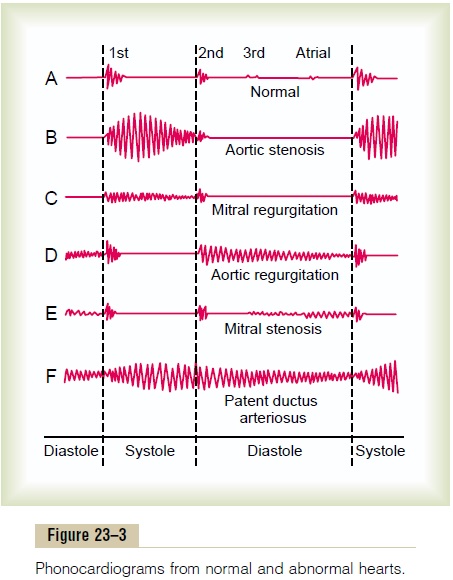 Surgical Treatment. Surgical treatment of patent ductusarteriosus is extremely simple; one need only ligate the patent ductus or divide it and then close the two ends.

In fact, this was one of the first successful heart sur-geries ever performed.

Tetralogy of Fallot— A Right-to-Left Shunt

Tetralogy of Fallot is shown in Figure 23–5; it is the most common cause of “blue baby.” Most of the blood bypasses the lungs, so the aortic blood is mainly unoxy-genated venous blood. In this condition, four abnor-malities of the heart occur simultaneously: 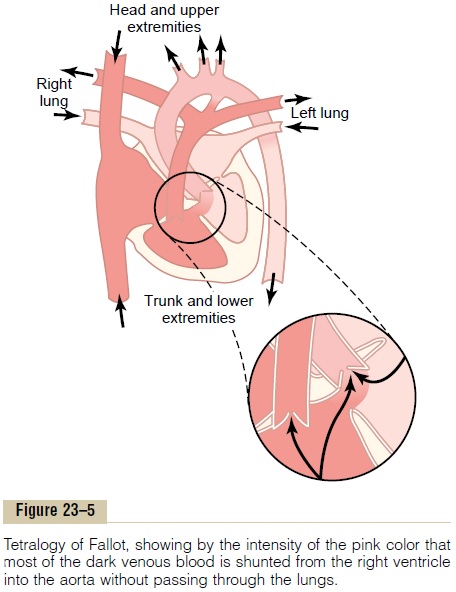 1.     The aorta originates from the right ventricle rather than the left, or it overrides a hole in the septum, as shown in Figure 23–5, receiving blood from both ventricles.

2.     The pulmonary artery is stenosed, so that much lower than normal amounts of blood pass from the right ventricle into the lungs; instead, most of the blood passes directly into the aorta, thus bypassing the lungs.

4.     Because the right side of the heart must pump large quantities of blood against the high pressure in the aorta, its musculature is highly developed, causing an enlarged right ventricle.

Abnormal Circulatory Dynamics. It is readily apparent thatthe major physiological difficulty caused by tetralogy of Fallot is the shunting of blood past the lungs without its becoming oxygenated. As much as 75 per cent of the venous blood returning to the heart passes directly from the right ventricle into the aorta without becom-ing oxygenated.

A diagnosis of tetralogy of Fallot is usually based on (1) the fact that the baby’s skin is cyanotic (blue); (2) measurement of high systolic pressure in the right ventricle, recorded through a catheter; (3) charac-teristic changes in the radiological silhouette of the heart, showing an enlarged right ventricle; and (4) angiograms (x-ray pictures) showing abnormal blood flow through the interventricular septal hole and into the overriding aorta, but much less flow through the stenosed pulmonary artery.

Surgical Treatment. Tetralogy of Fallot can usually betreated successfully by surgery. The usual operation is to open the pulmonary stenosis, close the septal defect, and reconstruct the flow pathway into the aorta. When surgery is successful, the average life expectancy increases from only 3 to 4 years to 50 or more years.

One of the most common causes of congenital heart defects is a viral infection in the mother during the first trimester of pregnancy when the fetal heart is being formed. Defects are particularly prone to develop when the expectant mother contracts German measles; thus, obstetricians often advise termination of pregnancy if German measles occurs in the first trimester.