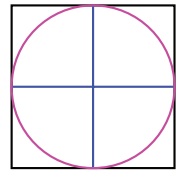 Draw a circle with radius 6cm in a chart. Then Cut the circle from the chart. Fold it into four equal parts and spread again. Draw/paste four pictures on the circle as shown in the figure.

Fix/put the round chart on the white paper by using a pin in center. By rotating the chart we observe that two vertical lines and the center point will lie at the same point. Look at the changes occurred, when the chart is rotated.

* When we rotate, the shapes are rotated.

* The images are rotated depending on the point.

* The point is called as “Centre of Rotation”

Think it: Is there any changes to the wings of the ventilater fan, after rotating one-fourth turn and half-turn.

Let's see the rotation of the square.