Under the 74th Constitutional Amendment, the urban areas comprise different types of municipal bodies constituted with reference to character, size and importance of different towns and cities.

Under the 74th Constitutional Amendment, the urban areas comprise different types of municipal bodies constituted with reference to character, size and importance of different towns and cities. Municipal Corporations, Municipal Committees, Notified Area Committees, Town Area Committees, and Cantonment Boards are the usual types of municipal bodies and while the first four types were created under the state municipal laws, the Cantonment Boards owed their origin to the Central Act called the Cantonments Act, 1924.

After passing the Constitution (74th Amendment) Act, 1992, the Government of India notified the Amendment in June 1993. The Act of 1992 provided for a period of one year from the date of its commencement, the states were required to change amend or modify there legislations in order to incorporate the Central Amendment. Various states and union territories have enacted legislations for the governance of the urban local bodies in their respective jurisdictions. For example, the Punjab government enacted the Punjab Municipal Bill, 1998 to replace the Punjab Municipal Act, 1911.

A Nagar Panchayat or Town Panchayat is constituted for a transitional area, ie. , an area in transition from a rural area to an urban area. The population of such an area is 5000 or more but less than 15,000 and the revenue generated from tax and sources exceeds such amount per capita per annum as many be specified by the government from time to time. Every Nagar Panchayat is a body corporate and has a perpetual succession and a common seal with power to acquire and hold, or dispose of properties and may sue and sued.

A Town panchayat shall consist of such number of elected members not less than 9 or not more than 15, as the state government may determine by rules. The members of the legislative assembly representing the constituencies comprising transitional area or any part of thereof, and two members nominated by the state government from amongst persons having special knowledge or experience in municipal administration. The nominated members shall not have the right to vote in the Town panchayat meetings. The term of a Town Panchayat shall be 5 years.

The government shall divide a transitional area (town panchayat area) in to a number of territorial constituencies known as wards and each ward shall elect only one member. Out of the total number of seats in Town Panchayat to be filled by direct election, seats are reserved for Scheduled Castes (SC) and Scheduled Tribes (ST) in the same proportion of the population of SCs and STs to the total population of that town panchayat area. In addition, one third of the total number of seats of that area are reserved for women, including the seats reserved for SCs and STs. The town panchayat members shall be elected from amongst its members, One President and one Vice President in a meeting convened by the Deputy commissioner. Every Town Panchayat shall perform obligatory functions such as water supply, drainage, clearing the streets etc. Every town panchayat shall have an executive officer appointed by the state government

A Municipal Council or municipality is constituted for a small urban area with a population of 15,000 or more but is less than 3 lakhs and the revenue generated from the tax and other sources exceeds such amount per capita per annum as may be specified by state government from time to time.

A Municipal Council or Municipality for example in Class-A, not less than 20 and not more that 50 elected members; Class-B 15-30, and Class-C, 10-15. The members of State Legislative Assembly representing the constituencies lying within the municipal area are “Ex-Officio” members of the Municipal Council. Not more than 3 members are nominated by the state government. The nominated members do not have the right to vote in the elections of the chairpersons and vice chairpersons. The members are elected through secret ballot.

The whole municipal area is divided into wards, as per the number of councilors to be elected , say 15 or 30 or 10 . The electoral rolls of the legislative assembly in relation to municipal area are generally taken as the voters list. The candidates contesting in the elections are allotted symbols. The symbols of the recognized political parties are allotted only to the candidates sponsored or adopted by the them.

The 74th Amendment provide the constitution of ward committees consisting of one or more wards within the territorial area of a Municipality, having a population of 3 lakhs or more. A member of a Municipality representing a ward with in the territorial area of the ward committee shall be a member of the ward committee. The Standing Committees shall be constituted for each Municipality consisting of the President, senior Vice-President, and Vice president and 4 other members in the case of Class- A, 2 in the case of Class-B from among the elected members for a period of 2 and half years. The term of office of Municipality is five years. The elected municipality can be dissolved if it is not performing as per the provisions of law.

The state government in every municipality appoints an Executive Officer. The Executive Officer is the principal executive authority and all municipal staff is sub-ordinate to him/ her. He/ She is the important officer to execute, supervise monitor and report the activities of the Municipalities to the council. The Municipal Council is the governing body of the Municipality, responsible for Municipal Administration. It makes by laws the governing place and time of council meetings, the manner of giving notices, the conduct of meetings.

The councilors are expected to keep themselves in touch with the citizens and enquire about their grievances against municipal staff, and bringing to the notice of the appropriate administrative head or to raise the matter in the council meetings. The powers and responsibilities of municipalities are enshrined in the Twelfth Schedule of the Constitution. (See Box-2) 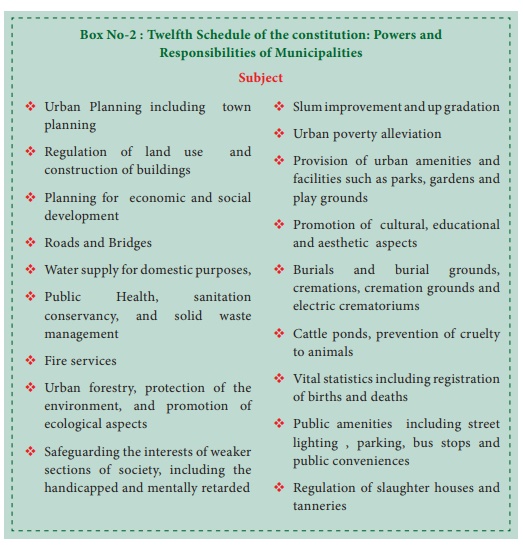 The 74th Constitutional Amendment provided the constitution of committee for district planning, to prepare a draft development plan for the district as a whole. The Committee shall consolidate the plans prepared by the panchayats and municipalities in the district. The composition of the District Planning Committee as provided in the Act of 1992, consists of that not less than 4/5th of the total members of the committee. They shall be elected by and from amongst the elected members of the Panchayats at the district level and of the municipalities in the district, in proportion to the ratio between the population of the rural areas and of the urban areas in the district.

The Municipalities have been provided with the power to raise revenue for discharging its duties and performing its functions such as the taxes, duties and fees which could be levied and collected by the Municipalities (For example: tax on lands and buildings, scavenging tax on octroi, a tax on advertisements, a fire tax, toll on roads and bridges etc) the 74th Amendment Act made it obligatory for the state governments to Constitute State Finance Commission within one year from the commencement of Act.

The State Finance Commission shall make recommendations regarding:

(i) Distribution between the state government and municipalities of the net proceeds of taxes, duties, tolls and fees to be assigned or appropriated by the state;

(ii)   Allocation of share of such proceeds between the municipalities at all levels in the states;

(iii)   Determination of taxes, duties tolls and fees to be assigned or appropriated by the municipalities;

(iv)  Grants-in-aid to fund the state;

(v) Measures needed to improve the financial position of the municipalities.

However in practice, the Municipalities in our country undertake only such functions which have been specifically assigned to them by respective state legislative enactments. This restrictive approach to municipal functions no longer and holds good in the changed political context and needs of the country. There has been increasing tendency on the part of the state government to take over more and more local functions either directly or by creating special purpose agencies.

The Municipal Corporations constitute the highest or the top most form of urban local government in India. They are created for big cities by the enactments of the State Legislatures or of the Parliament in the case of Union Territory. The various categories of the cities are determined by its population, area or revenues. Municipal Corporations in the early period were established in three Presidency towns viz; Bombay, Madras and Calcutta. A Municipal Corporation is based on the democratic principle of management of local affairs by the representatives of the people of the city concerned, who are to be elected periodically on the basis of universal adult franchise with reservation of seats for SCs and STs in proportion to their population and also for women. The Municipal Corporation is marked by statutory separation of deliberative and executive wings.

The Corporation Council and the Standing Committees Constituted the deliberative wing and the executive wing. The Council, consisting of elected representatives and a few nominated members, is responsible for the exercise of legislative powers. The Standing Committees function as an auxiliary of the Corporations. All the matters to be passed by the council pass through it after it considers the proposals and recommendation made by the Municipal Commissioner. The Municipal Commissioner is the chief executive and implementing the decisions taken by the council.

Municipal Corporations in India are generally structured on the pattern of Bombay Municipal Corporation. The tenure of the Municipal Corporation is 5 years. The 74th Amendment provides wards committees, which shall be considered for one or more wards within the territorial areas of the Corporation. The chairperson shall be elected for one year and shall be eligible for re - election. A ward committee supervises provision of water supply, pipes and sewage, drainage connections to premises removal of accumulated water on streets or public places due to rain or other, collection and removal of solid waste, provision of health immunization, services for the civic services in slum and lighting, repair of roads, maintenance parks drains and etc.,.

A Municipal Corporation shall have a Standing Committee constituted by it, consisting of Mayor, the senior deputy Mayor and other councilors elected by the councilors of the Corporation from amongst the members. The Mayor shall be the chairperson of the Standing Committee. The Municipal Corporation also constitutes committees to deal with subject matters such as water supply, sewage etc.,. Each subject committee shall consist of not less than three and not more than five members.

The term of the subject committees is one year. The Municipal Corporations have been provided with financial resources to carry out its duties assigned to it by the 74th Amendment. A list of 18 functions to be performed by Municipal Corporations has been given in the 12th Schedule of the Constitution. Like the 73rd Amendment Act, the 74th Amendment Act also provided for a committee planning metropolitan area.

All Municipal Corporations are provided with the office of the Mayor and Deputy Mayor. Mayor in some states are directly elected by all the voters with in the metro city. In some states, Mayor is elected from amongst the elected councilors. The Mayor presides over council meetings, guide its deliberations to maintain decorum and exclude any objectionable portion from the record of the proceedings of the council. He/ She is also empowered to expel and even suspend members for gross misconduct or disorderly behaviour. In case of a tie he/she exercises his /her casting vote.