The territorial area of a village Panchayat can be specified by a public notification by the Governor of the state, and may consist of more than one village.

Article 243 B of the Constitution which was inserted into the Constitution under the 73rd Constitutional Amendment, envisages that states and union territories except those with population not exceeding 20 lakhs, will have to constitute a three tier system of Panchayat ie, village, intermediate and district levels. While the district has been defined as a normal district in state, the jurisdiction of village and intermediate levels have not been specifically defined in the Act.

The territorial area of a village Panchayat can be specified by a public notification by the Governor of the state, and may consist of more than one village. Similarly, the intermediate level which can be a Taluk or Block is also to be specified by the Governor through a public notification in this regard. This provides a certain amount of flexibility to the States in constituting Panchayats at the lower and middle levels.

A new schedule, Eleventh Schedule was inserted in to the Constitution of India, which provided for obligatory and discretionary functions of the Panchayats at three levels, 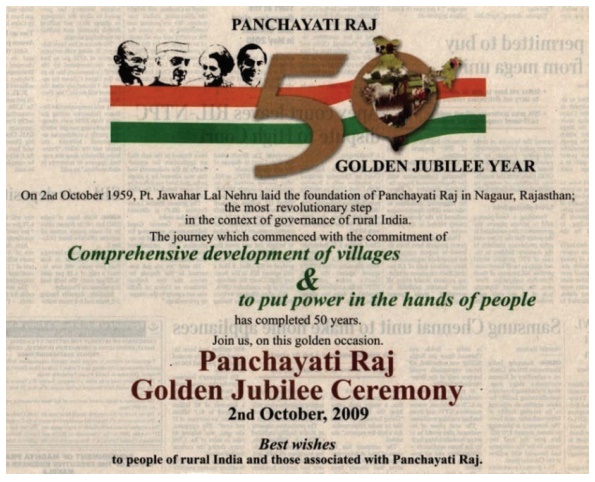 All the seats in a Panchayat shall be filled by persons by direct election from territorial constituencies in the Panchayat area. The electorate is named as “Gram sabha” consisting of persons registered in the electoral rolls relating to a village comprised within the area of a Panchayat.

The Chairperson of each Panchayat shall be elected according to the law passed by a State and such State law shall also provide for the representation of Chairpersons of Village and Intermediate Panchayats in the District Panchayat, as well as members of the Union and State legislature in the Panchayats above the village level.

Hence, the new Amendment Act provided for participation of Members of Parliament and Members of Legislative Assemblies in the Panchayat Union Councils and also in the District Panchayats. The Amendment Act also provided reservation of seats in the three tiers for Scheduled Castes and Scheduled Tribes and not less than one third of the total seats for women. The tenure of the Panchayats shall be five years.

The law provides that any person who is eligible to be elected to the state legislature shall be qualified to be chosen as a member of a Panchayat. The responsibilities of the Panchayats are clearly laid down in the Eleventh Schedule. (Box.1). Like the National Finance commission, the Constitution Amendment Act also provided for the State Finance commission for recommending the formula for transfer of the financial aid to local governments from the states. 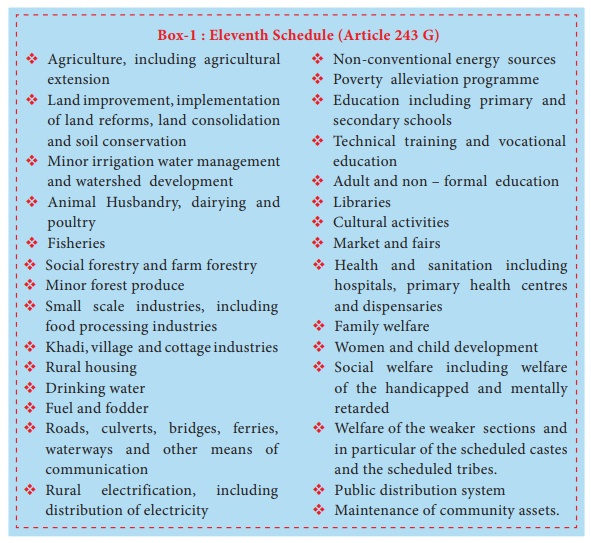 Consequent to the 73rd Constitutional Amendment as well as the Supreme court’s rulings which effectively mandate that local authorities are also to be treated as “Government or state”, The Panchayats that have acquired substantial legitimacy are recognized as an instrument of the Government and have created participatory structure of grass roots democracy for the rural people. Creation of constitutional bodies like the State Election Commissions and the State Finance Commissions have also given permanency and stability to these institutions. However, most Panchayats continue to be treated as agencies of the state for implementation of prescribed schemes, even though essential services such as provision of drinking water, rural sanitation, preventive health and primary education are accepted as their legitimate core functions. The structure of district administration under the control of the Collector, characteristically by a command structure and lack of horizontal coordination at the grass roots level, has become somewhat anachronistic in the modern democratic framework of out polity. In order to make local administration more responsive transparent and accountable to citizens there is a need to have a representative government not only in the Union and States but also at the District and Village levels with an equitable division of functions among them. 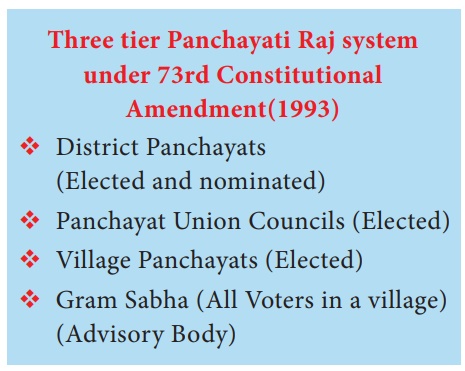