The design based on the working stress method although ensures safety of the structures at working or services loads, it does not provide a realistic estimate of the ultimate or collapse load of the structure in contrast to the limit state method of design. The working stress method of design results in comparatively larger and conservative sections of the structural elements with higher quantities of steel reinforcement which results in conservative and costly design. Structural engineers have used this

method extensively during the 20th century and presently the method is incorporated as an alternative to the limit state method in Annexure -B of the recently revised Indian Standard Code Is : 456 -2000 for specific applications.

The permissible stresses in concrete under service loads for the various stress states of compressive, flexure and bond is compiled in Table 2.1 (Table 21 of IS ; 456 -2000) 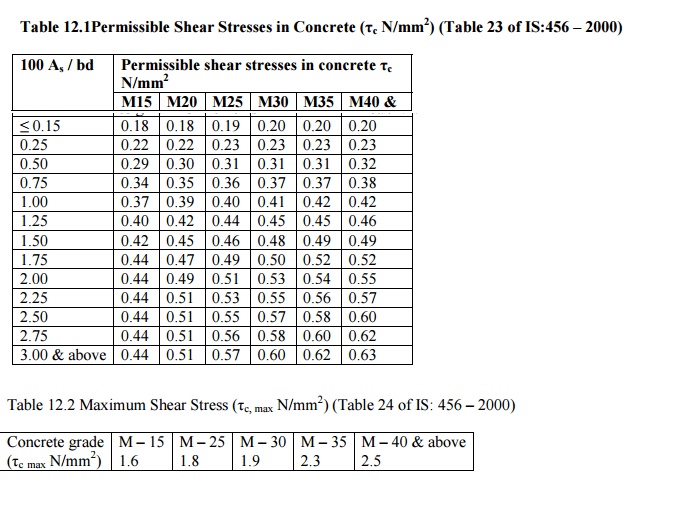 The permissible stress in different types of steel reinforcement is shown in table 2.2 (Table 22 of IS 456

The working load moments and shear forces are evaluated at critical sections and the required effective depth is checked by using the relation:

Q = a constant depending upon the working stresses in concrete and steel, neutral axis depth factor (k) and lever arm coefficient (f).

For different grades of concretepiledin Tableand2.3. steelThedepth th provided should be equal to or greater than the depth computed by the relation and the area of reinforcement required in the section to resi

The number of steel bars required is selected with due regard to the spacing of bars and cover requirements.

After complying with flexure, the section is generally checked for resistance against shear forces by calculating thec givennominal=(Vby/bd)shear? stress ?

The permissible shearc)depends uponstressthepercentagereinforcementsconcreteinthecross -(? section and grade of concrete as shown in Table 12.1

Ifc< ?vsuitable? shear reinforcements are designed in beams at a spacing sv given by the relation;

Where sv = spacing of stirrups

In case of slabs, the permissible shear stres Also in the case of slabsv)shouldnot excetheed nominalhalfthecmaxsheshownvalueinrs

Table 12.2. In such cases the thickness of the slab is increased and the slab is redesigned.

In the case of compression members, the axial load permissible on a short column reinforced with longitudinal bars and lateral ties is given by