[Anna Sewell was an English writer of children’s classic ‘Black Beauty’. Although it has to come to be treated as a children’s book, it was originally meant for those who took care of horses. She talks about kindness, sympathy and understanding in the treatment of horses.]

[Anna Sewell was an English writer of children’s classic ‘Black Beauty’. Although it has to come to be treated as a children’s book, it was originally meant for those who took care of horses. She talks about kindness, sympathy and understanding in the treatment of horses.]

One morning in the autumn, my master had to go on a long journey,

John harnessed me to the new cart. I liked to pull as it was very light and the high wheels rolled along so smoothly.

It was about to rain, the weather was very windy and dry leaves blew across the road. Master, John and I went along merrily till we came to the toll gate at the entrance to the low wooden bridge. The river banks were fairly high so the bridge, instead of raising in the arc over the river, went across just level. In the middle, if the river was full, the water would be nearly up to the foot of the bridge. There were good sturdy rails on both sides so people were not afraid.

The man at the toll gate said that the river was rising fast. He feared it would be a bad night. Many of the fields were already under water. In one low part of the road, the water was halfway up to my knees. But the cart was so good and master drove gently, so it did not matter. 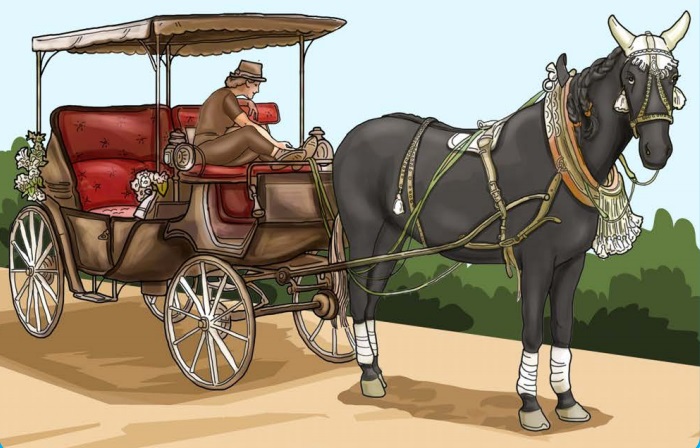 When we got into the town, I had a good wait. Master’s business kept him for a long time, so we could not start for home till late in the afternoon. By then, the wind was much stronger and I heard Master say to John that he had never been out in such a bad storm. We went through a wood where great branches were swaying about like twigs and the wind made a terrible rushing sound.

“I wish we were out of this wood,” said my master. 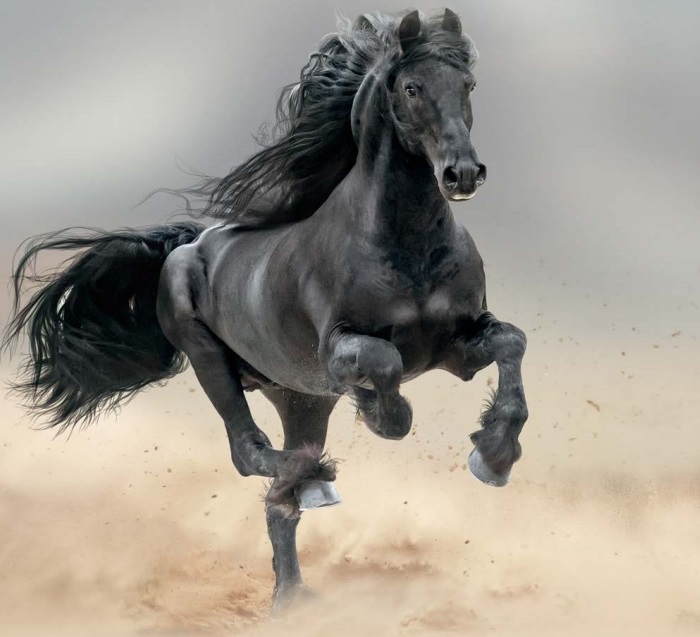 “Yes, sir,” replied John. “I hope no branches fall down on us,” The words were hardly out of his mouth when there was a groan and a splitting sound. Then a Oak tree that had been torn up by the roots came crashing down and fell right across the road in front of us.

I will never say I was not frightened of, for I was. I stopped still trembling. Of course, I did not turn around or run away. I was not brought up like that. John jumped out and in a moment was standing by my head. He held my bridle and calmed my nerves.

“That was close! What shall we do now?” asked my master.

“Well, sir, we can’t drive over this big tree and we can’t get round it. We must go back to four cross ways. Then it will be about six miles before we get to the wooden bridge again. It will make us late, but black beauty is fresh.”

This happened sometimes when the river was flooding, so Master did not stop. We were going along at a good speed, but the moment my feet touched the ground the first part of the bridge, I felt sure that something was wrong. I dared not go forward. I made a dead stop.

“Go on, Beauty", said my master, and gave me a touch of the whip. But I dared not

move. He gave me a sharp snap of the whip. I jumped, I jumped, but I dared not go forward.

“There is something wrong sir”, said John. He got down from the cart and came to my head. He took hold of my bridle and tried to lead me forward. “Come on, Beauty. What’s the matter?” Just then, the other man at the tollgate on the other side ran out, flashing a torch like a madman.

“What’s the matter?” shouted my master.

“The bridge is broken in the middle. Part of it has been carried away by the flood. If

you come any further, you’ll be in the river!”

"You really are a Beauty!” said John, as he took hold of my bridle and gently turned me round. Of course, I could not tell him what the problem was, but I knew very well that the bridge was not safe.

The wind seemed to have settled down. It grew darker and darker stiller and stiller. I trotted softly along, the wheels hardly making a sound on the soft, wet road.

Then Master told John that God had given people brains by which they can find things for themselves. He said, however, God had given animals a special knowledge which did not depend on thinking things out and was much quicker to respond to danger. This instinct in animals, he said, had often saved the lives of men.

John had many stories to tell of dogs and horses, and the wonderful ways they had saved the lives of people. He thought many people did not take very good care of their animals or make friends with them as they should do.

At last, we got back to Master’s house. We saw that all the lights were on. As we came up to the door, Mistress ran out to greet Master.

“Are you safe, my dear? Oh! I have been so worried about you. Did you have an accident?”

“No, my dear, but if Black Beauty had not been wiser than we were, all three of us would have been drowned at the wooden bridge.”

They went into the house and I heard no more. John took me to the stable. Oh! What a good supper he gave me that night. And then a really thick bed of straw. I was grateful for everything for I was tired.