After learning this lesson, students will be able to • understand the change of states in water • describe the water cycle • explain the importance of water cycle • summarise rainwater harvesting and its uses

After learning this lesson, students will be able to

• understand the change of states in water

• explain the importance of water cycle

• summarise rainwater harvesting and its uses

Water is the most abundant and precious resource on the Earth. It is found in oceans, seas, rivers, streams, lakes, ponds and even under the ground. All living things need water to live and to do many other activities. We have already learnt about this in the previous classes. Let us learn more about water in this lesson.

I. Change of States in Water

See the given pictures and write down the state of each objects. (Solid, Liquid, Gas )

These forms are also called states of water. Ice is in solid form, water is in liquid form and watervapour is in gaseous form.

These states occur naturally because of temperature changes. Water becomes ice in cold regions, remains as water in oceans/rivers and becomes water vapour due to the heat of the Sun. 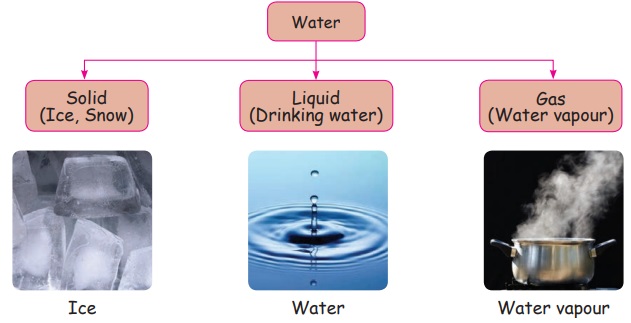 More to know: Human body consists of 75% of water.

Fill in the boxes given below with correct answers.

Change of States in water 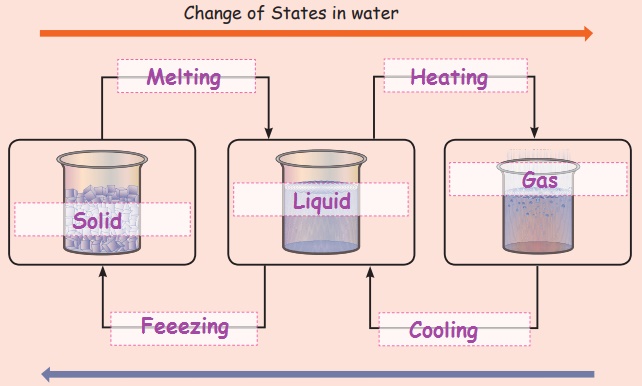 Ice is a solid form of water. At temperature below 0° C water becomes ice. This process is called freezing.

Water in liquid state is available in water bodies such as oceans, river, waterfalls etc.

Write any two water bodies in your area. river,  ocean

Water becomes water vapour as the temperature increases due to heat. Heating forms a white mist of extremely small water droplets in the air known as water vapour.

1. Why water is a good example for all states of matter?

Answer: Because it is the only natural substance that can exist in all three states of matter at the temperatures normally found on Earth.

2. Which of the following is in liquid state? Rain/Ice/Snow

• Fill water in an ice tray and keep it in the freezer. After few hours, take it out. What happened to the water?

The water changed from liquid state to solid state. It became ice.

• Now keep this ice tray on a table for some time. What happens to the ice?

• Pour water from the ice tray into a kettle. Ask an elder at your home to heat the kettle and observe the mouth of the kettle when the water starts boiling. What do you see?

We see white smoke (water vapour) coming out from the mouth of the kettle. Water changes from liquid state to gaseous state. It became steam.

In nature, water keeps changing its state. Let us see how this happens. Due to the Sun‛s heat, water in oceans and rivers changes into water vapour and rises up.

The continuous cycle through which water is circulated by different processes like evaporation, condensation and precipitation is called water cycle. 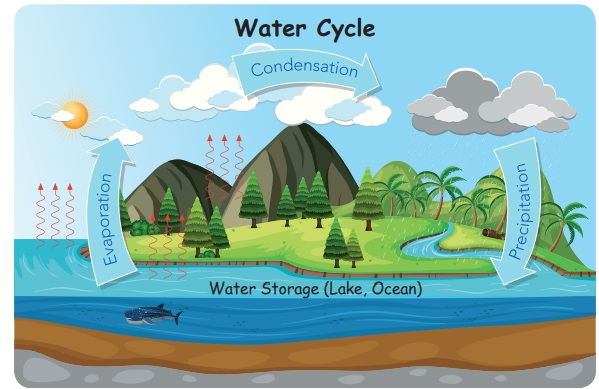 Each day, we lose a little more than a cup of water when we exhale.

What happens to the water in a wet cloth?

Answer: The water in a wet cloth gets evaporated. Hence the cloth gets dried up.

a. only evaporation is involved

b. only condensation is involved

c. evaporation and condensation are involved

• To improve the availability of ground water.

• To control the Earth‛s temperature.

• To provide water to plants and animals especially humans.

• To recycle the Earth‛s supply of water constantly.

1. Unscramble the words and fill in the blanks.

3. Why is water cycle important to human? To improve the availability of ground water.

4. Name the process which is responsible for the formation of droplets on the surface of a glass of cold drink. condensation

73% of our brain‛s mass consists of water. The Antartic region has about 70% of the worlds fresh water.

‘Rainwater harvesting‛ is the process of collecting and storing rainwater for future use. Rainwater can be collected in natural reservoirs or artificial tanks. Roof top harvesting is also a type of rainwater harvesting. The rainwater on the top of the building is collected and passed into the ground through pipes. Water passing through the pipes enters the pit which consist of gravels and Coarse sand. As it passes impurities are filtered and stored as ground water. 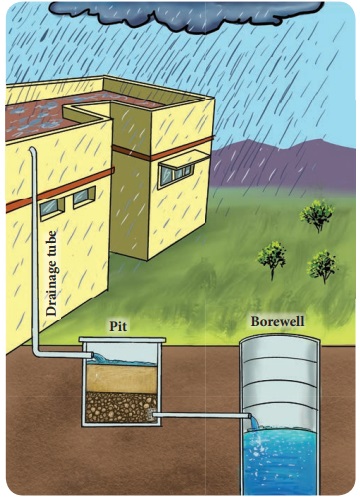 More to know: H2O is the chemical formula of water.

• It increases the ground water level

• It can be used for agriculture

• It increases the availability of water for living things

Rain water harvesting is the only way to conserve rain water

• The rain water harvesting was launched in the year 2001 by the Tamil Nadu government.

• Tamil Nadu is the first Indian state which made rainwater harvesting as mandatory.

1. List out some other benefits of rain water harvesting.

❖ It can be used for agriculture

❖ It increases the availability of water for living things

2. Suggest some ideas to save rainwater in your school.

❖ By collecting rainwater from roof and allowing it to flow around borewells.

Tips to construct a rainwater harvesting pit at school/home.

Construct a pit of any shape or size. It may be generally constructed, 1-2 metre wide and 2-3 metre depth. The pits can be filled with boulders, gravels and Coarse sand.

Put the boulders in the bottom, sand in the top and gravels in the middle. 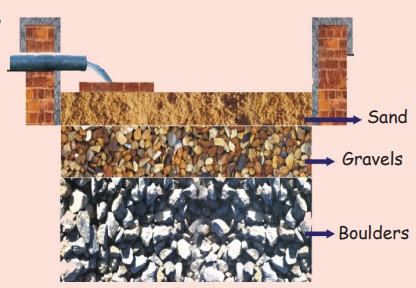 Discuss with your friends.

Rain water harvesting has an important role to protect our environment.