The above Figure gives an overview of the WAP architecture, its protocols and components, and compares this architecture with the typical internet architecture when using the World Wide Web. 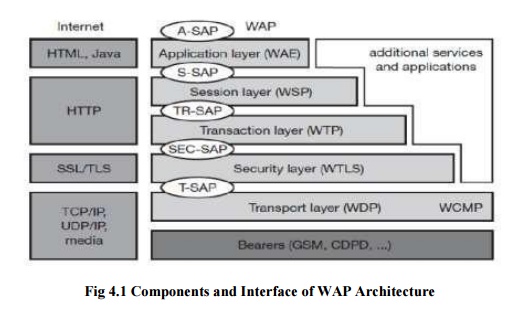 The above Figure gives an overview of the WAP architecture, its protocols and components, and compares this architecture with the typical internet architecture when using the World Wide Web. This comparison is often cited by the WAP Forum and it helps to understand the architecture (WAP Forum, 2000a). This comparison can be misleading as not all components and protocols shown at the same layer are comparable. For consistency reasons with the existing specification, the following stays with the model as shown in Figure 10.9.The basis for transmission of data is formed by different bearer services. WAP does not specify bearer services, but uses existing data services and will integrate further services. Examples are message services, such as short message service (SMS) of GSM, circuit-switched data, such as high-speed circuit switched data (HSCSD) in GSM, or packet switched data, such as general packet radio service (GPRS) in GSM. Many other bearers are supported, such as CDPD, IS-136, PHS. No special interface has been specified between the bearer service and the next higher layer, the transport layer with its wireless datagram protocol (WDP) and the additional wireless control message protocol (WCMP), because the adaptation of these protocols are bearer-specific.

The transport layer offers a bearer independent, consistent datagram-oriented service to the higher layers of the WAP architecture. Communication is done transparently over one of the available bearer services. The transport layer service access point (T-SAP) is the common interface to be used by higher layers independent of the underlying network. The next higher layer, the security layer with its wireless transport layer security protocol WTLS offers its service at the security SAP (SEC-SAP). WTLS is based on the transport layer security (TLS, formerly SSL, secure sockets layer) already known from the www. WTLS has been optimized for use in wireless networks with narrow-band channels. It can offer data integrity, privacy, authentication, and (some) denial-of-service protection.

The WAP transaction layer with its wireless transaction protocol (WTP) offers a lightweight transaction service at the transaction SAP (TR-SAP). This service efficiently provides reliable or unreliable requests and asynchronous transactions as explained in the above section. Tightly coupled to this layer is the next higher layer, if used for connection-oriented service as described in section 10.3.5. The session layer with the wireless session protocol (WSP) currently offers two services at the session-SAP (S-SAP), one connection-oriented and one connectionless if used directly on top of WDP. A special service for browsing the web (WSP/B) has been defined that offers HTTP/1.1 functionality, long-lived session state, session suspend and resume, session migration and other features needed for wireless mobile access to the web. Finally the application layer with the wireless application environment (WAE) offers a framework for the integration of different www and mobile telephony applications. It offers many protocols and services with special service access.

The main issues here are scripting languages, special markup languages, interfaces to telephony applications, and many content formats adapted to the special requirements of small, handheld, wireless devices.Figure 10.9 not only shows the overall WAP architecture, but also its relation to the traditional internet architecture for www applications. The WAP transport layer together with the bearers can be (roughly) compared to the services offered by TCP or UDP over IP and different media in the internet. If a bearer in the WAP architecture already offers IP services (e.g., GPRS, CDPD) then UDP is used as WDP. The TLS/SSL layer of the internet has also been adopted for the WAP architecture with some changes required for optimization. The functionality of the session and transaction layer can roughly be compared with the role of HTTP in the web architecture. However, HTTP does not offer all the additional mechanisms needed for efficient wireless, mobile access (e.g., session migration, suspend/resume).

Finally, the application layer offers similar features as HTML and Java. Again, special formats and features optimized for the wireless scenario have been defined and telephony access has been added.WAP does not always force all applications to use the whole protocol architecture. Applications can use only a part of the architecture as shown in Figure 10.9. For example, this means that, if an application does not require security but needs the reliable transport of data, it can directly use a service of the transaction layer. Simple applications can directly use WDP. Different scenarios are possible for the integration of WAP components into existing wireless and fixed networks (see Figure 10.10). On the left side, different fixed networks, such as the traditional internet and the public switched telephone network (PSTN), are shown. One cannot change protocols and services of these existing networks so several new elements will be implemented between these networks and the WAP-enabled wireless, mobile devices in a wireless network on the right-hand side.

The current www in the internet offers web pages with the help of HTML and web servers. To be able to browse these pages or additional pages with handheld devices, a wireless markup language (WML) has been defined in WAP. Special filters within the fixed network can now translate HTML into WML, web servers can already provide pages in WML, or the gateways between the fixed and wireless network can translate HTML into WML. These gateways not only filter pages but also act as proxies for web access, as explained in the following sections.WML is additionally converted into binary WML for more efficient transmission. In a similar way, a special gateway can be implemented to access traditional telephone services via binary WML. This wireless telephony application (WTA) server translates, e.g., signaling of the telephone network (incoming call etc.) into WML events displayed at the handheld device. It is important to notice the integrated view for the wireless client of all different services; telephony and web, via the WAE. 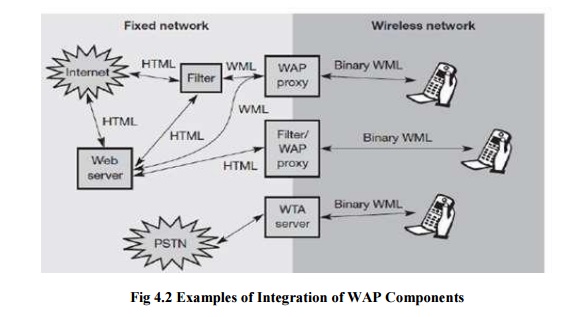