i. Pick out the idioms and phrases from the box and write them in the blanks equivalent to their meanings. One is done for you. ii. Read the given sentences carefully and fill in with appropriate phrasal verbs. Choose them from the help box. iii. Read the given passage carefully and fill in the blanks with suitable phrasal verbs from the help box. (English Book back answers and solution for questions)

1. Lalitha takes a late night walk in the beach once in a blue moon.

In the above sentence ‘once in a blue moon’ is an idiom which means an event that happens rarely.

2. The women cricketers were on the ball in their last over of the match.

In the above sentence ‘on the ball’ is an idiom which means when someone understands the situations well.

A Phrase, on the other hand, is a small group of words put together as a conceptual unit. It does not take a figurative meaning. The meaning of the word is literal. It can be long or short but it does not include the subject- verb pairing, necessary to make a clause. For example, ‘looking stunning’; to live and breathe’; ‘comfortable bed’.

A Phrasal verb is an idiomatic phrase consisting of a verb and another element, typically an adverb or a preposition or both, the meaning of which is different from the meaning of its separate parts. For example see to, or a combination of both, such as look down on.

1. The crew ran out of water and food before they could complete their expedition.

In the above sentence, ran out is a phrasal verb which means to use completely.

2. The Police personnel instructed the mob to go away from the place during the strike.

In the above sentence, go away is a phrasal verb which means to leave from the place.

D. Pick out the idioms and phrases from the box and write them in the blanks equivalent to their meanings. One is done for you. 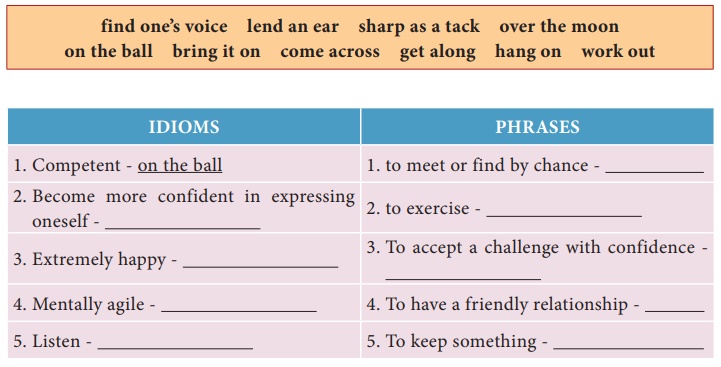 l. Competent - on the ball

3. Extremely happy  - over the moon

4. To accept a challenge with confidence - bring it on

1. io meet or find by chance - come across

3. Mentally agile - sharp as a tack

4. To have a friendly relationship - get along

5. To keep something - hang on

E. Read the given sentences carefully and fill in with appropriate phrasal verbs. Choose them from the help box.

1.           The airhostess instructed the passengers to wear the seat belts during the take off

F. Read the given passage carefully and fill in the blanks with suitable phrasal verbs from the help box.

Riya is a young dancer who feels contented and satisfied with herself. Let's hear from her.

Hi, everyone! I am Riya. I suppose I’m really lucky because I don’t put on weight easily. I never in work out the gym and the only time I stretch out is when I need something from the top shelf. I tried aerobics several times but I couldn’t keep up with the others. I take my pet for a walk thrice a day though, and that helps to burn off the calories. I usually watch what I eat but I sometimes binge on icecream.

My  sister  Diya,  is  a  real  fitness fanatic.  Before  she  works  out  she warms up every day with push ups, sit ups, stretches and a jog around the park. She says it’s important to build up good levels of strength and stamina. I don’t want to overdo it though. A fitness regime like hers would tire me out!