The term, 'Tense' denotes the time of action. They show when the work is done. The English Tenses are : 1. Past 2. Present 3. Future

The term, 'Tense' denotes the time of action. They show when the work is done.

The English Tenses are :

Forms and Uses of the Simple Present Tense

Note: Except for third person plural affirmative, the structure does not change for negative forms.

e.g. Mahatma Gandhi says, “Be the change you want to see in the world.”

❖  The Present Continuous Tense is used for an action that is in progress at the time of speaking.

❖  It is used for an action that is in progress and will continue in future.

❖  It is used to denote an action that is planned to take place in the near future e.g. Yazhini is meeting the Prime Minister tomorrow.

❖  It is used along with adverbs such as 'always, constantly, repeatedly' etc. to express an action that has become a habit by doing it over and over again.

Note: Verbs of perception and some other verbs are not generally used in the present continuous tense, for example see, smell, hear, taste, know, understand, hate, like, want, wish, etc.

❖  For an action which began in the past and is in progress now.

e.g.  Bharani has called the fire man and they are on their way.

❖  To express an action that has been recently completed

e.g.  She has lived in this house for five years.

Note: We do not use adverbs of time denoting the past tense in Present Perfect Tense.

❖  To express an action which began at some time in the past and is still continuing and may extend into the future.

e.g.  She has been studying since morning.

❖  To express an action that began sometime in the past and has been just completed. However, its result is visible in the present.

e.g. I have been working on this project for five hours and I am tired now.

A. Complete the sentences in present tense forms.

1.  Saravanan always goes (go) for a walk in the morning.

2.  We gather (gather) here for a meeting and the chair person is yet to arrive.

3.  Aruna has  eagerly been waiting (wait) to meet her friend since morning.

4.  Sheeba moves/will move (move) to a new house next week.

6.  Ilakiya and Adhira enjoy (enjoy) each other's company very much.

7.  Mani has been working (work) in this school for five years.

Forms and uses of the Simple Past Tense Uses

❖  To express a habitual or regular action only in the past; It can also be expressed by using 'used to'

❖  In the indirect form of speech

❖ To express two actions, where the first action leads instantly to the second action

e.g.  When the meeting ended, the staff members came out.

Forms and Uses of Past Continuous Tense

❖  To express a state or an action that was continuing at a certain point of time in the past. It had begun before that point and was probably continuing after it. We use adverbials of time.

e.g.  We were decorating the house for the birthday party in the morning.

❖  To express an action that was in progress in the past

e.g.  She was cooking when the guests arrived.

❖  To describe two or more actions continuing at the same time

e.g.  Nithish was constantly complaining about something or the other.

Forms and Uses of Past Perfect Tense

e.g. He had appealed to the manager for a week's leave before I reached.

❖  To describe an action or event which has been completed before some point of time.

❖  To describe an action in the past using the time adverbials such as already, since, before, etc.

I wish I had accepted the job.

Forms and Uses of Past Perfect Continuous Tense.

e.g.  Mahi and Ragav had been arguing with each other when their mom arrived.

e.g.  The students had been practicing for the last couple of weeks.

B. Complete the sentences in past tense forms.

Future time in English can be expressed in the following ways:

e.g. She leaves this evening.

(iii) be about to

e.g. The train is about to leave the station.

e.g. Prices are going to rise.

by denoting the Principal clause of a conditional sentence.

e.g. If she works hard, she will get a scholarship.

❖  Shall is used with the second and the third persons to express determination, promise, intention, etc.

❖  Will is used with the first person to express willingness, determination, etc

❖  The simple future is used to express the speaker's opinion, for something to be done in the future. We use verbs such believe, know, suppose, think, etc. We also use adverbs such as perhaps, possibly, surely, etc.

❖  The Future Perfect expresses an action that is expected to be completed by a certain time in the future.

e.g.  We will have completed our work by the time our sisters arrive.

❖  It is used to express the speaker's belief that something has taken place. In such sentences it does not express the future.

“You will have discussed the plans how to celebrate the function”, said my mother.

❖  It is also used for an action which at a given future time will be in the past.

e.g. In two years' time, I shall have earned my degree.

❖  The Future Perfect Continuous Tense is used to express an action that will have been going on at or before some point of time in the future.

By next June, I shall have been completing my studies.

C. Fill in the blanks using the verbs in the brackets in the future form.

3.    The peon will have rung the bell by the time I reach the school.(ring)

4.    I shall visit my sister's house next April if I go to Uttarkhand. (visit)

5.    If you listen carefully, you will understand my point. (understand)

6.    By next year, I shall have lived in Chennai for fifteen years. (live)

7.    The new edition of this book will come out shortly. (come)

D. Underline the verbs and identify the tense forms.

E In the following passage, some words are missing. Choose the correct words from the given options to complete the passage.

Raghav (a) is born in a middle class family. He is a (b) school going boy of 8. His mother (c) works as a software engineer in an MNC. (d) Drawing is his favourite hobby. He (e) won the first prize in school level competition for drawing last week. He (f) started drawing at the age of 3. His mother (g) hopes he (h) will become a great painter in future.

F. The following passage has not been edited. There is one error in the tense of the verb in each line. Write the wrong word as well as the correct word in the given place. One is done for you.

buy some snacks from the market. - bought

Arun serving it to all his friends. Then - served

they all sat together to planning their holidays. - to plan

Arun have a cottage in Ooty, so - has

they all plan to go to Ooty during the holidays. - planned

“Would we have a good time?, asked Arun. - shall

They all cheerfully say, “Yes!” - said 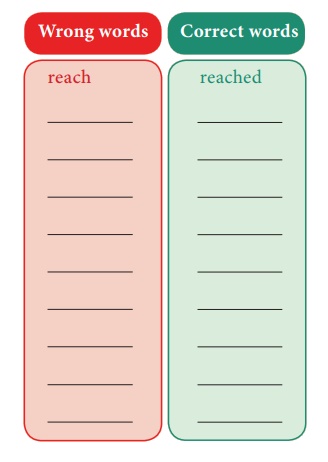 G. Read the story and rewrite it using the simple past tense.

Juno the elephant is lonely and tries to make friends with the other animals in the forest. But, the other animals refuse to play with Juno because of his size. One day, all the animals are running away from Dera the tiger who is eating everyone he finds. Juno goes and gives Dera a swift kick. Dera immediately runs away. Juno is now everyone's friend.

Juno the elephant was lonely and tried to make friends with the other animals in the forest. But; the other animals refused to play with Juno, because of his size. One day, all the animals ran away from Dera the tiger, who ate everyone he found. Juno went and gave Dera a swift kick. Dera immediately ran away. Juno was now everyone’s friend.

H. Read the situations given and frame two suitable sentences in the appropriate form of the tenses.

Give two instructions to your classmates.

Mention any two of your discontinued habits in the correct tense form.

1.I used to quarrel with my friends.

2. I gave up drinking coffee.

Make any two requests to your classmates or friends.

1. Please give me your record.

2. Kindly go with me to the library.

Mention any of your two dreams in the correct tense form.

2. I always dream of becoming a millionaire.