A. Use the following phrases in sentences of your own. B. Now refer a dictionary and find idioms on the following animals, birds and insects. C. Based on your reading, answer the following questions in a paragraph of about 100—150 words each. D. Telling the Story Again. E. Choose the correct answer. F. Learn the following idioms on bears.

A. Use the following phrases in sentences of your own.

earn one's name,  in the rear of, to see one fight,  devoid of, air and manner,   quick as a flash, in wild haste, make a pass

Kamal earned his name in politics as powerful public speaker.

There is a church in the rear of this college

3. to see one fight (to make someone fight with)

The youth irritated a little monkey to see him fight

The letter was devoid of warmth and feeling

All were attracted by the air and manners of the new Principal.

6. quick as a flash (extremely fast)

Quick as flash, the prisoner said, "No, I won't"

The thief escaped in wild haste.

8. make a pass (to fly over or close by something)

The bird made a pass at me as I got close to its nest.

B. Now refer a dictionary and find idioms on the following animals, birds and insects. Learn their meanings and share what you have learnt with your class. Try to frame illustrative sentences with those idioms. Find opportunities to use them in your everyday conversations.

Idioms: get the lion's share (greater part of something)

Meanings: The lion's share of the donations has gone to the chairman.

Idioms: As poor as a church mouse (very poor)

Meanings: My cousin is as poor as a church mouse and never has any money to spend

Meanings: He was as sick as a parrot when he could not see his friend at the party

Idioms: As sly as a fox (smart and clever)

Meanings: The manager of our apartment is as sly as a fox

Meanings: I will be a monkey's uncle. I never thought I would pass NEET

Meanings: I sat in the open space during the dog days of May.

Idioms: At a snail's pace (a very slow movement)

Meanings: They are making progress with testing a new vaccine, but at a snail's pace.

Idioms: Make a beeline for (go quickly and directly to somebody)

Meanings: My mother made a beeline for dinner as soon as she arrived.

Idioms: Snake in the grass (a hated and deceitful person)

Meanings: I believe you are a snake in the grass

C. Based on your reading, answer the following questions in a paragraph of about 100—150 words each.

1. Describe the appearance of Little Cyclone.

Title : Little Cyclone: The story of a grizzly cub

Theme : Avoid torture to any creature

Little Cyclone was originated from ALASKA in America. He was born with courage and devoid of all sense of fear.

Little cyclone was a roguish looking cub as ever stepped. He had a grizzly gray full moon of fluffy hair. His eyes were big and they sparkled like jet beads behind a pudgy nose. It was absurdly short for a bear. He was little more than a big bale of gray for set up on four posts of the same material. He had the true grizzly spirit.

He was a new comer at the Bear's Nursery in the New York Zoological park. Every new comer would be badly scared during the first day and very timid the next day. But cyclone was different. He had no sense of fear.

When the box was opened he stalked deliberately. He told the other bears that he was from Alaska and anyone could come and take from him. He put everyone down in the attack. From then on his position was assured. He was treated with respect.

2. What does the fight Little Cyclone and his brother put up, tell you about the nature of grizzly bears?

Title : Little Cyclone: The story of a grizzly cub

The grizzly cub was famous for its courage and vigour of its resistance to ill treatment. Once when the mother was fired, the cub and its brother ran away. They were found sleeping with the mother grasped by the captor, the next morning.

Both the cubs fought against the captor. One of the cubs made a fight so fierce and terrible. The captor could not with stand and let the cub go.

Though the other cub fought desperately the captor seized him and carried him away. He was established with collar, chain and post in the rear of the saloon. The public irritated the little grizzly cub with a long pole.

Before he could become insane, he was rescued by the zoological society's field agent. He was shipped to New York and later sent to the Bear's Nursery at the New York zoological park. He had every change to prove his courage there. He was a daring new comer in the Nursery. He conscientiously met every attack genuine or feigned that was made upon him. In less than an hour every bear understood his vigour and strength. From that time on cyclone's position was assured and all respected him.

Grizzlies dare any bear without fear. They are different. They are born full of courage and devoid of all sense of fear.

"Fear kills but the spirit of courage revives"

A grizzly cub is different. It is born full of courage. It has the vigour of resistance.

When the mother was fired at in the forest, the cubs ran away and came back later. They slept with ther mother who was dead. The next morning they were awakened by the grasp hands of a man. They bit and scratched him.

The people wanted to see the fight. So they poked it with the pole. But he was rescued by the zoological society and shipped to the Bear's Nursery at the New York Zoological park. The grizzly bear dared every other bear in the Nursery. He met conscientiously every true attack. In less than an hour every bear understood his vigour and strength. From that time on grizzly's position was assured and all respected him.

"Wear no fear and shed no tear"

3. "If any of you fellows think there is anything coming to you from me, come and take it". How did Little Cyclone prove this?

Title: Little Cyclone: The story of a grizzly cub

Theme: A brave fears no evil

Little cyclone was a grizzly cub to ill treatment. The people tried to make him insane by their violent torture. Luckily he was rescued by the zoological society. It was shipped to the Bear's Nursery at New York zoological park. When the box was opened, he found himself free there. He stalked deliberately.

Little Czar, an European bear walked up and aimed a blow at Cyclone's left ear. Quick as a flash, Cyclone out shot him with his right leg on his head. Czar was amazed and confused. Another black bear got frightened. He quitted the field scrambling to the top of the cliff.

Cyclone met every real or fake attack frequently. Soon every bear understood that queer gray fellow could fight any other on three second's notice. "If any of you fellows think there is anything coming to you from me, come and take it", said Cyclone openly

Little Cyclone was born full of courage. Little Cyclone became great because it was devoid of all sense of fears. No wonder that a grizzly bear has no fear and none can go anywhere near

"Dare to share that there's a bear devoid of fear".

4. Describe the confrontation between Little Czar and Little Cyclone.

Title: Little Cyclone: The story of a grizzly cub

Little cyclone was a grizzly cub from Alaska. He earned his name by the vigour of his resistence to ill-treatment. Cyclone was developed by a captor and ill treated along with the people. His fellow bears were ready to test his strength and courage. They thought that Cyclone would be scared and timid.

Little Cyclone was different. He had no fear. He challenged the other bears to come and take from him as they wished. Little Cyclone overcame everyone. Little Czar was an European brown bear cub. He was saucy and good natured. He walked up. Cyclone outshot Czar on his head with his right paw. He was amazed.

The highly anticipated encounter between Cyclone and Czar ended in a 'tit for tat' manner. The reaction was heavier than the action. He was treated with respect by all. Being a fine spirited, dignified little grizzly bear neither attacked anyone nor had a fight anymore.

“Confidence is the key to success”

Little Cyclone was a grizzly cub from Alaska who earned his name by the vigour of his resistence to ill-treatment. When his mother was fired at, they both ran away. The next day at sunrise the two orphans found themselves at the rough grasp of human hands. One of them escaped because he made a fight so fierce and terrible. So the captor let him go. But the other cub was rescued by the zoological society and taken to the Bear's Nursery at New York. The Zoological Park had __________ Usually a newcomer is badly scared on his first day but grizzlies are different. When the box was opened he stood up with courage that he was a grizzly bear from Alaska and he had come to stay. Cyclone courageously met every attack real or faked. In less than an hour all the other bears understood he could fight any other bear on three seconds' notice. From then on Little Cyclone's position was assured and was treated with respect.

a. appearance and behaviour.

b. vigour of resistence to ill-treatment.

d. escape from a cyclone.

a. he was afraid of bears.

b. he did not have proper equipment to seize him.

c. the bear fought so fiercely.

d. the bear escaped and ran away.

a. members of the Blue Cross.

b. friendly hands of the Zoological Society.

c. members of the National Zoo.

b. grizzly cub from Alaska.

In1902, American PresidentTheodore Roosevelt also known as Teddy participated in a bear-hunting trip in Mississippi. While hunting, Roosevelt declared the behavior of the other hunters “unsportsmanlike" after he refused to kill a bear they had captured. 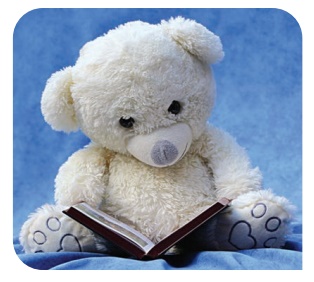 As news of the hunting trip spread, many newspapers around the country featured political cartoons starring “Teddy" and “the bear."

Meanwhile, in Brooklyn, New York, a shop owner named Morris Michtom saw one of the cartoons and had an idea. Michtom and his wife created plush, stuffed bears and placed them in the front window of their shop. With permission from Roosevelt, Michtom named the bears “Teddy bears".