Now, read this story about a young bear cub that bravely fended off a possible attack from much bigger and ferocious fellow animals in a Zoological park. Willpower and self-confidence triumph over brute strength.

Now, read this story about a young bear cub that bravely fended off a possible attack from much bigger and ferocious fellow animals in a Zoological park. Willpower and self-confidence triumph over brute strength.

We find little kids hugging their teddies and not parting from them even when they sleep. Perhaps the warm and furry appearance of the bear attracts them and offers them comfort.They love the doll so much that they spend their time feeding it, dressing it up and holding it to their bosom.

Little kids cry when they are separated from their mothers. Mothers too would not allow their children to be taken away from them.

How do you think animals would behave when they are isolated from their families?

Here is an interesting story of a young grizzly bear which proved its strength and grit, not wishing to be cowed down or dominated by other bigger bears. 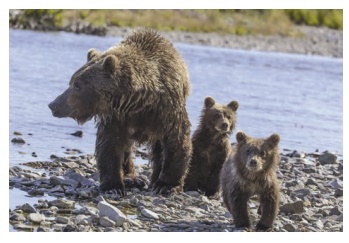 Little Cyclone is a grizzly cub from Alaska, who earned his name by the vigour of his resistance to ill-treatment. When his mother was fired at, on a timbered hillside facing Chilkat River, he and his brother ran away as fast as their stumpy little legs could carry them. When they crept where they had last seen her, they thought her asleep; and cuddling up close against her yet warm body they slept peacefully until morning.

Before the early morning sun had reached their side of the mountains, the two orphans were awakened by the rough grasp of human hands. Valiantly they bit and scratched, and bawled aloud with rage. One of them made a fight so fierce and terrible that his nervous captor let him go, and that one is still on the Chilkoot.

Although the other cub fought just as desperately, his captor seized him by the hind legs, dragged him backwards, occasionally swung him around his head, and kept him generally engaged until ropes were procured for binding him. When finally established, with collar, chain and post, in the rear of the saloon in Porcupine City, two-legged animals less intelligent than himself frequently and violently prodded the little grizzly with a long pole "to see him fight." Barely in time to save him from insanity, little Cyclone was rescued by the friendly hands of the Zoological Society's field agent, placed in a comfortable box, freed from all annoyance, and shipped to New York.

He was at that time as droll and roguish-looking a grizzly cub as ever stepped. In a grizzly-gray full moon of fluffy hair, two big black eyes sparkled like jet beads, behind a pudgy little nose, absurdly short for a bear. Excepting for his high shoulders, he was little more than a big bale of gray fur set up on four posts of the same material.

But his claws were formidable, and he had the true grizzly spirit.

The Bears' Nursery at the New York Zoological Park is a big yard with a shade tree, a tree to climb, a swimming pool, three sleeping dens, and a rock cliff. It never contains fewer than six cubs, and sometimes eight.

Naturally, it is a good test of courage and temper to turn a new bear into that roistering crowd. Usually a newcomer is badly scared during his first day in the Nursery, and very timid during the next. But grizzlies are different. They are born full of courage and devoid of all sense of fear. 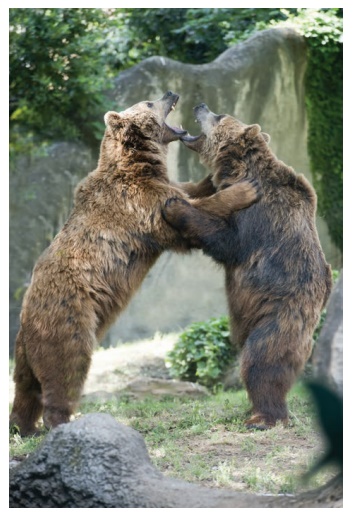 When little Cyclone's travelling box was opened, and he found himself free in the Nursery, he stalked deliberately to the centre of the stage, halted, and calmly looked about him. His air and manner said as plainly as English: "I'm a grizzly from Alaska, and I've come to stay. If any of you fellows think there is anything coming to you from me, come and take it."

Little Czar, a very saucy but good-natured European brown bear cub, walked up and aimed a sample blow at Cyclone's left ear. Quick as a flash, outshot Cyclone's right paw, as only a grizzly can strike, and caught the would-be hazer on the side of the head. Amazed and confounded, Czar fled in wild haste. Next in order, a black bear cub, twice the size of Cyclone, made a pass at the newcomer, and he too received so fierce a countercharge that he ignominiously quit the field and scrambled to the top of the cliff.

Cyclone conscientiously met every attack, real or feigned, that was made upon him. In less than an hour it was understood by every bear in the Nursery that, that queer-looking gray fellow with the broad head and short nose could strike quick and hard, and that he could fight any other bear on three seconds' notice.

From that time on Cyclone's position has been assured. He is treated with the respect that a good forearm inspires, but being really a fine-spirited, dignified little grizzly, he attacks no one, and never has had a fight. 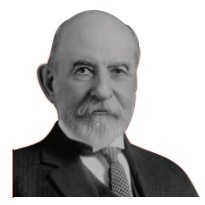 William Temple Hornaday, Sc.D. (December 1, 1854 - March 6, 1937) was an American z o o l o g i s t , conservationist, taxidermist, and author. He was a pioneer in the early wild life conversation movement in the United States. During his life time he published many books and articles on the need for conservation of wild llife