The open loop V/F control of an induction motor is the most common method of speed control because of its simplicity and these types of motors are widely used in industry.

The open loop V/F control of an induction motor is the most common method of speed control because of its simplicity and these types of motors are widely used in industry. Traditionally, induction motors have been used with open loop 50Hz power supplies for constant speed applications. For adjustable speed drive applications, frequency control is natural. However, voltage is required to be proportional to frequency so that the stator flux

Remains constant if the stator resistance is neglected. The power circuit consists of a diode rectifier with a single or three-phase ac supply, filter and PWM voltage-fed inverter. Ideally no feedback signals are required for this control scheme.

The PWM converter is merged with the inverter block. Some problems encountered in the operation of this open loop drive are the following:

The slip speed, being the difference between the synchronous speed and the electrical rotor speed, cannot be maintained, as the rotor speed is not measured in this scheme. This can lead to operation in the unstable region of the torque-speed characteristics.

These problems are to be suppress by having an outer loop in the induction motor drive, in which the actual rotor speed is compared with its commanded value, and the error is processed through a controller usually a PI controller and a limiter is used to obtain the slip-speed command 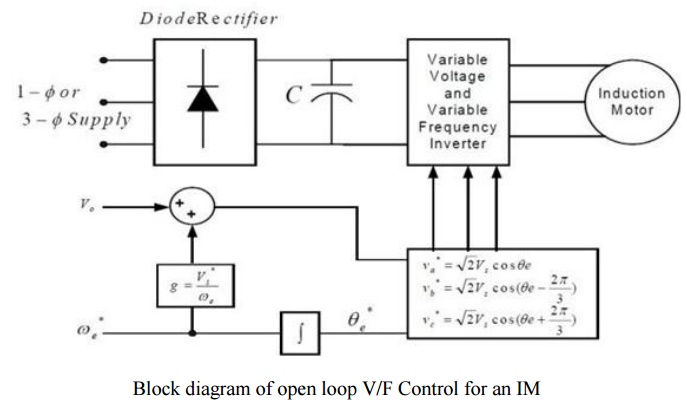 The basis of constant V/F speed control of induction motor is to apply a variable magnitude and variable frequency voltage to the motor. Both the voltage source inverter and current source inverters are used in adjustable speed ac drives. The following block diagram shows the closed loop V/F control using a VSI 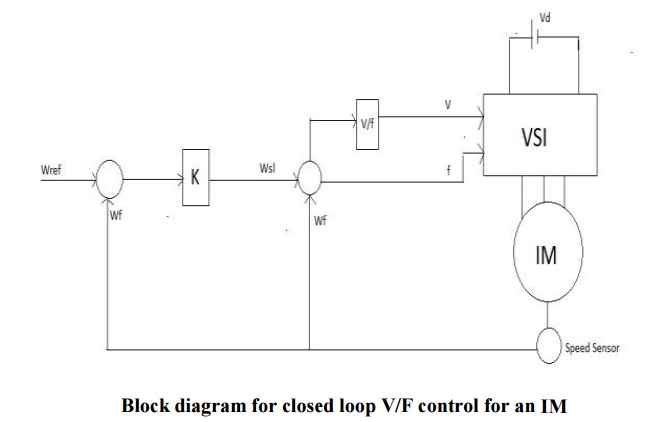 A speed sensor or a shaft position encoder is used to obtain the actual speed of the motor. It is then compared to a reference speed. The difference between the two generates an error and the error so obtained is processed in a Proportional controller and its output sets the inverter frequency. The synchronous speed, obtained by adding actual speed Ѡf and the slip speed ѠSI, determines the inverter frequency The reference signal for the closed-loop control of the machine terminal voltage Ѡf is generated from frequency