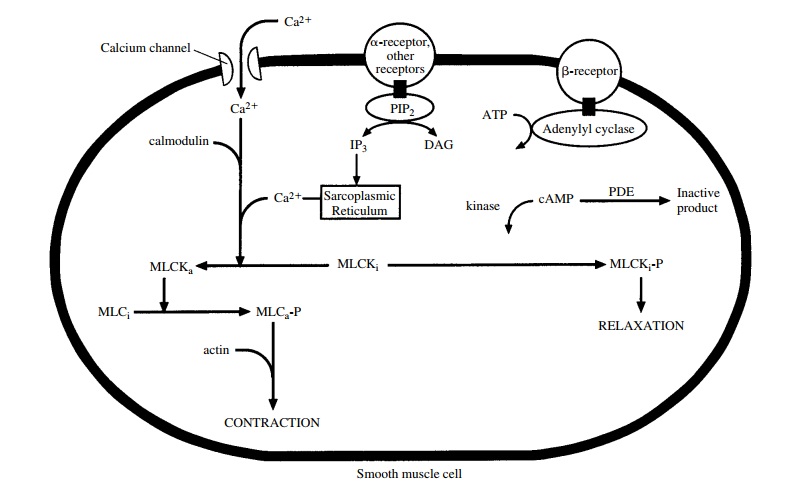 Many risk factors are associated with the triggering of premature labor, that is, labor that begins before the end of week 37 of gestation.

Many risk factors are associated with the triggering of premature labor, that is, labor that begins before the end of week 37 of gestation. These include maternal smoking or drug abuse, lack of prenatal care, multiple gestation, placental abnormalities, infection of the fetal membranes, cervical incompetence, and previous preterm birth. Although most episodes are of unknown origin, premature labor can develop spontaneously or may follow early rupture of fetal membranes, perhaps as a result of a genetically associated abnormality.

Uterine relaxants (tocolytic drugs) are administered where prolonged intrauterine life would greatly benefit the fetus or would permit additional time to allow treat-ment with drugs such as corticosteroids, which promote the production of fetal lung surfactant. Tocolytics are also used when temporary uterine relaxation is be de-sirable (e.g., intrauterine fetal resuscitation). While hy-dration, bed rest, and sedation have been used to inhibit uterine contractions, tocolytics are more likely to inhibit labor early in gestation, especially before labor is far advanced. Agents used in this regard include magnesium sulfate, alcohol, prostaglandin inhibitors, calcium chan-nel blockers, hydroxyprogesterone, and β2-adrenergic agonists.

All tocolytic agents are powerful drugs that must be used with extreme care, since pulmonary edema, myo-cardial infarction, respiratory arrest, cardiac arrest, and death can occur during tocolytic therapy. Newborns of mothers given tocolytics have had respiratory depres-sion, intraventricular hemorrhage, and necrotizing ente-rocolitis. Absolute contraindications to tocolysis include acute fetal distress (except during intrauterine resusci-tation), chorioamnionitis, eclampsia or severe pre-eclampsia, fetal demise (of a singleton pregnancy), fetal maturity, and maternal hemodynamic instability.

Intravenous use of ethanol, while once widely employed to inhibit premature labor, is now of historical interest only. Ethanol inhibits oxytocin release from the pituitary and thus indirectly decreases myometrial contractility. Today, β2-adrenomimetics and magnesium sulfate have replaced ethanol for parenteral tocolysis.

Although β2-adrenoceptor agonists  are the most commonly used tocolytic agents in the United States, they are not completely successful in treating preterm labor. Prophylactic administration of these agents to patients at high risk for preterm labor is not always effective. There is, however, clear evidence that β2-agonists can arrest preterm labor for at least 48 to 72 hours. The efficacy of these drugs beyond this time frame is in dispute. Even a short delay in delivery can be desirable, however, in that at very early preterm gesta-tions (24–28 weeks) a 2-day delay in delivery may mean a 10 to 15% increase in probability of survival for the newborn. Furthermore, such a delay allows for cortico-steroid administration to the mother, which has been shown to decrease the incidence and severity of respi-ratory distress syndrome of the newborn, decrease the incidence of neonatal intraventricular hemorrhage, and improve survival in the premature newborn. Tocolysis also allows for the transport of the mother to a tertiary center where delivery of the preterm infant often re-sults in its improved survival.

These drugs act by binding to β2-adrenoceptors on myometrial cell membranes and activating adenylyl cy-clase. This in turn increases levels of cAMP in the cell (Fig. 62.1), activating cAMP-dependent protein kinase, hence decreasing intracellular calcium concentrations and reducing the effect of calcium on muscle contraction.

β2-Adrenergic drugs have many side effects. These result both from their residual 1 activity and from theirability to stimulate β2-receptors elsewhere in the body . The side effects include palpitations, tremor, nausea, vomiting, nervousness, anxiety, chest pain, shortness of breath, hyperglycemia, hypokalemia, and hypotension. Serious complications of drug therapy are pulmonary edema, cardiac insufficiency, arrhyth-mias, myocardial ischemia, and maternal death.

Terbutaline (Brethine, Bricanyl) is a relatively specific β2-adrenoceptor agonist. Terbutaline can prevent premature labor, especially in individuals who are more than 20 weeks into gestation and have no indication of ruptured fetal membranes or in whom labor is not far advanced. Its effectiveness in premature labor after 33 weeks of gestation is much less clear. Terbutaline can decrease the frequency, intensity, and duration of uterine contractions through its ability to directly stimulate β2-adrenoceptors. While it appears to be especially selective for β 2-receptor activation, terbutaline does have some β 1 activity as well.

Terbutaline should be initially used only in an appropriate hospital setting where any obstetric com-plications can be readily addressed. After initial admin-istration, it can be used in the outpatient setting. Concomitant use of β2-adrenergic agonists and corti-costeroids have additional diabetic effects and may rarely lead to pulmonary edema. The combination of β2-adrenergic agonists and magnesium sulfate can cause cardiac disturbances, while coadministration of terbu-taline with other sympathomimetics can lead to the po-tentiation of the actions of the latter drugs.

Terbutaline is frequently used in the management of premature labor, although it has not been marketed for such use. Its effectiveness, side effects, precautions, and contraindications are similar to those of all β2-adrener-gic agonists. Terbutaline can cause tachycardia, hy-potension, hyperglycemia, and hypokalemia. It can be given orally in addition to subcutaneous or intravenous administration.

Magnesium sulfate prevents convulsions in preeclamp-sia and directly uncouples excitation–contraction in myometrial cells through inhibition of cellular action potentials. Furthermore, magnesium sulfate decreases calcium uptake by competing for its binding sites, acti-vating adenylyl cyclase (thereby reducing intracellular calcium), and stimulating calcium-dependent adenosine triphosphatase (ATPase), which promotes calcium up-take by the sarcoplasmic reticulum. Magnesium is fil-tered by the glomerulus, so patients with low glomeru-lar filtration will have low magnesium clearance. Although the compound does have some cardiac side effects, magnesium sulfate may be preferred over β-adrenergic agents in patients with heart disease, dia-betes, hypertension, or hyperthyroidism.

There is much debate as to the efficacy of magne-sium sulfate. For effective inhibition of uterine activity, enough must be given to maintain a blood plasma level of at least 5.5 mEq/L. Even at this level, tocolysis may be hard to achieve.

Since certain prostaglandins are known to play a role in stimulating uterine contractions during normal labor, it is logical that inhibitors of prostaglandin synthesis have been used to delay preterm labor. Indomethacin (Indocin) has been the principal agent for this use. Indomethacin is given orally or rectally for 24 or 48 hours to delay premature labor. A potential worry con-cerning the use of indomethacin is premature closure of the fetal ductus arteriosus induced by its ability to inhibit prostaglandin synthesis. The fetal ductus is more sensitive to indomethacin beyond 32 weeks of gesta-tion. Indomethacin use also can decrease amniotic fluid volume and cause oligohydramnios through its ability to decrease fetal urinary output. Long-term use of ma-ternal indomethacin is associated with primary pul-monary hypertension and an increased incidence of in-traventricular hemorrhage in the newborn.

The calcium channel blocking agent nifedipine, is one of the more recent drugs examined as a tocolytic agent. It acts by impairing the entry of Ca++ into myometrial cells via voltage-dependent channels and thereby inhibits contractility. Although preliminary results appear promising, more studies are needed before its usefulness can be fully as-sessed.

Hydroxyprogesterone has been used prophylacti-cally for the 12th to 37th week of pregnancy, particularly in women who are in the high-risk category for prema-ture delivery (e.g., those with a history of premature de-livery or spontaneous abortion). A concern relating to teratogenic potential has limited its use. Hydroxy-progesterone as a tocolytic agent requires further eval-uation before its routine prophylactic administration can be recommended.

With the increasing evidence that oxytocin is impor-tant in human labor, investigators are studying oxytocin antagonists for the treatment of preterm labor. Atosiban is an analogue of oxytocin that is modified at positions 1, 2, 4, and 8. It is a competitive inhibitor of oxytocin binding. Early studies have demonstrated that this drug does decrease and stop uterine contractions. Atosiban is not available for use in the United States.