Unemployment and its types

Unemployment is problem faced when there are people, who are willing to work and able to work but cannot find suitable jobs.

Unemployment and its types

Unemployment is problem faced when there are people, who are willing to work and able to work but cannot find suitable jobs. 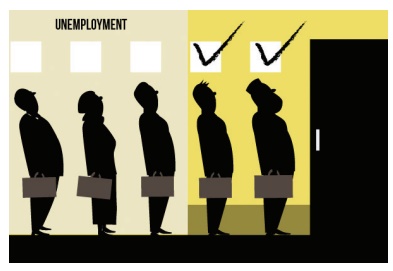 The following are the types of unemployment. 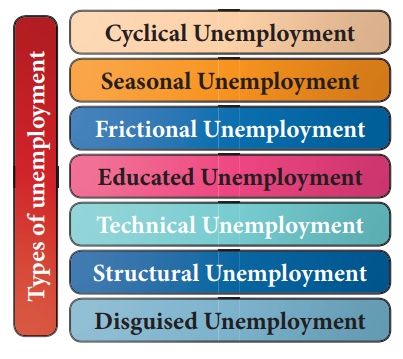 This unemployment exists during the downturn phase of trade cycle in the economy. In a business cycle during the period of recession and depression, income and output fall leading to widespread unemployment. It is caused by deficiency of effective demand. Cyclical unemployment can be cured by public investment or expansionary monetary policy.

This type of unemployment occurs during certain seasons of the year. In agriculture and agro based industries like sugar,production activities are carried out only in some seasons. These industries offer employment only during that season in a year. Therefore people may remain unemployed during the off season. Seasonal unemployment happens from demand side also; for example ice cream industry, holiday resorts etc.

Frictional unemployment arises due to imbalance between supply of labour and demand for labour. This is because of immobility of labour, lack of necessary skills, break down of machinery, shortage of raw materials etc. The persons who lose jobs and in search of jobs are also included under frictional unemployment.

Sometimes educated people are underemployed or unemployed when qualification does not match the job. Faulty education system, lack of employable skills, mass student turnout and preference for white collar jobs are highly responsible for educated unemployment in India.

Structural unemployment is due to drastic change in the structure of the society. Lack of demand for the product or shift in demand to other products cause this type of unemployment. For example rise in demand for mobile phones has adversely affected the demand for cameras, tape recorders etc. So this kind of unemployment results from massive and deep rooted changes in economic structure. 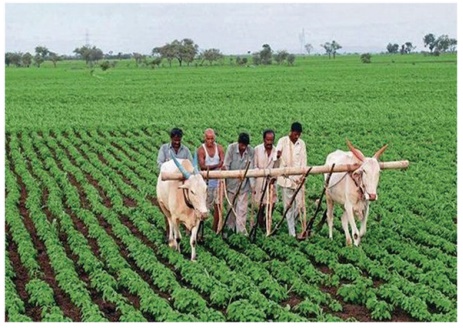 Disguised unemployment occurs when more people are there than what is actually required. Even if some workers are withdrawn, production does not suffer. This type of unemployment is found in agriculture. A person is said to be disguisedly by unemployed if his contribution to output is less than what he can produce by working for normal hours per day. In this situation, marginal productivity of labour is zero or less or negative.