Banks can be classified as follows.

C. Based on the functions of banks

B. Based on the status given by the RBI - Reserve Bank of India

C. Based on the ownership pattern

A. Based on the functions of banks

Banks which accept deposits from the public and grant loans to traders, individuals, agriculture, industries, transport, etc. in order to earn profit. Their lending is in comparatively small amounts and mostly for short and medium period. They also provide other services like remittance of funds, safe keeping of valuables, collection of cheques, s, issue of letters of credit, etc. They operate with a head office and a network of branch offices spread throughout the country. They  also  issue  guarantees  to businessmen. When a businessman or industrialist buy machinery on credit or apply for a big contract bank guarantees that in case the customer fails the bank will make the payment.

Huge finance required for investment, expansion and modernisation of big industries and others are granted by a separate type of banks called development Banks. They are also called industrial banks. The objective of development banks is not profit. Their aim is to develop the country and create employment opportunities. Finance is provided by them for medium and long terms ranging from five to twenty years. Development banks do not accept deposits from the public. They subscribe the shares and debentures of the industries. They provide technical and managerial consultancy services to industrialists. IDBI Bank established as the apex development bankin I964 and was transformed into public sector commercial bank in 2004. Currently it performs both development bank and commercial bank functions. Its name changed into IDBI Bank Limited in 2008. When a development bank is established for the development of agriculture industry it is called agricultural development bank. National Bank for Agriculture and Rural Development is such a bank

iii. MUDRA bank (for the development of micro industries)

All cooperative banks in India are owned by its customers or members who are farmers, small traders and others. Cooperative banks in India are either urban based or rural based. Rural cooperative banking structure in India has three tier structure for short term loans and two tier structure for long term loans (refer chart). For both these structures the apex body is National Bank for Agricultural and Rural Development - NABARD. All cooperative banks in Tamil Nadu are registered under Tamil Nadu Cooperative  Societies  Act  1983.  They are controlled by both RBI and the State Government. Their foremost objective is providing service to its members for rural and agricultural development and not  profit earning. They are set up in towns and villages rather than cities. Compared to the commercial banks they offer  less variety of services as the bye laws do not permit  all commercial bank activities. National Cooperative Development Corporation (NCDC) established in 1963 is providing loans and grants to  State  Governments  for financing  cooperative  societies. NCDC concentrates on projects like water conservation, irrigation, agri-insurance, rural sanitation, etc.

·           National Agricultural Cooperative Marketing Federation of India Ltd. (NAFED) was set up in 1958 and registered under the Multi State Co- operative Societies Act.

Banks which have registered office in a foreign country and branches in India are called foreign banks. These banks open their offices in big cities and port towns only. Mostly they serve  the  interests  of the multinational companies, employees and other business institutions. Their profitability is higher than Indian banks. In 2017, there were 42 Foreign Banks in India and all of them were scheduled banks. They have to oblige both their home country banking regulations and the RBI regulations.

The RRBs were formed under the Regional Rural Bank Act 1976, jointly by the Central Government, State Government, and a sponsor bank. Their share capital is contributed by these sponsors in the ratio of 50:15:35. They are established as low cost institutions in rural areas. Their objective is to develop rural economy and play supplementary role to cooperative societies. They mobilise deposits from the rural public and provide finance to rural artisans, small entrepreneurs and farmers and try to avoid their dependency on money lenders. As on 31.3.2016, there were 56 RRBs in India with 14,494 branches. They are regulated and supervised by NABARD.

Some banks are created for special purposes by the Government. Export and Import Bank of India was set up through Export- Import Bank of India Act, 1981. Its main objective is to facilitate international trade of Indian businessmen. EXIM Bank provides finance for import of technology, export product development, pre-shipment and post-shipment and overseas investment. National Housing Bank was established under the National Housing Bank Act, 1987. It is a wholly owned subsidiary of the RBI. The objective of NHB is to promote housing finance institutions at local and regional levels in India.

Local Area Bank (LAB) scheme was introduced by the RBI in August 1996. LABs are small private sector banks established in rural and semi-urban areas. Each bank serves two or three adjoining districts only. Their main objective is to mobilise rural savings (accept deposits) and invest them in the same areas. They have to follow the priority sector lending targets, including the targets on loans to weaker sections.  RBI received 227 applications for setting up LABs. 10 were considered for approval and six were given license under Section 22 of the Banking Regulation Act, 1949. Only three LABs are functioning now.

Deficiencies are found in the original model of LABs. There are practical difficulties in the operation of these banks. Even after 20 years (1996-2017) LABs could not make an impact in rural development. Therefore further licensing to LAB has been stopped.

Small Finance Banks(SFBs) areprivatesector banks set up in unbanked and underbanked regions of the country to achieve financial inclusion. Their objectives are;

b. providing credit to

i. small and marginal farmers

ii. to micro and small industries and iii other unorganised sector entities.

In September 2015, RBI granted provisional licenses to 8 Non-Banking Finance Companies (NBFCs) already engaged in microfinance to be converted into SFBs and 2 others. SFBs are low cost structure banks. They are formed under section 22 of the Banking Regulation Act 1949.

Payment  banks are  formed to   widen the spread of payment and financial services to small businesses, low-income households, and migrant labourers.

These banks should be fully networked from the beginning. They offer doorstep banking payment for a small fees prescribed  on the basis of the amount. They issue ATM/ debit cards, internet banking and third party fund transfers. They can’t lend money and issue credit cards. In August 2015, the RBI gave ‘in principle’ licenses to Payment Banks.

A Multilateral Development Bank is formed by the Governments of a group of countries.

B. Based on the Status given by the RBI

All banks which satisfied the norms and included in the Second Schedule to the RBI Act, 1934 are called scheduled banks. Such banks are given financial accommodation and remittance facilities at concessional rates by the RBI.

There is no non-scheduled commercial bank (private sector, public sectorandforeign banks) in India.

There are five Urban Cooperative Banks and three Local Area Banks which function as non-scheduled banks in India. Small Finance Banks and Payments Banks have not been licenses under Section 22 of the Banking Regulation Act, 1949.

C. Based on the Ownership Pattern

Any bank in which not less than 51 percent of shares are owned by the  Government are called Government banks or public sector commercial banks (Total 21). All nationalized banks (19 banks, in 2017), SBI and IDBI Ltd. are public sector commercial banks. All of them are joint stock company type banks. There are corporation type banks. Each corporation type bank is established by a separate Act of Parliament and is fully owned by Government of India.

All banking companies owned by private people are called private sector commercial banks. All cooperative banks are owned by its members from the public.

1n 1969, there were 14 private banks which were concentrated in cities and towns. Their objective was to earn more profits.  In order to channelize the funds  with  these commercial banks towards national priorities and to develop agricultural and rural sector nationalization of banks was undertaken. Government paid the share capital of those banks to the private owners and took over as Government banks. This is called nationalization of banks. 6 more banks were nationalised in 1980. New Bank of India one of the nationalised bank merged with Punjab National Bank in 1980 and today there only 19 nationalised banks (2017). Examples:

Note: Bharatiya Mahila Bankwas established on 19, November 2013 to serve exclusively women members of the public was merged with SBI on 31 March, 2017.

A detailed study on the functions of commercial banks is given in the next chapter. 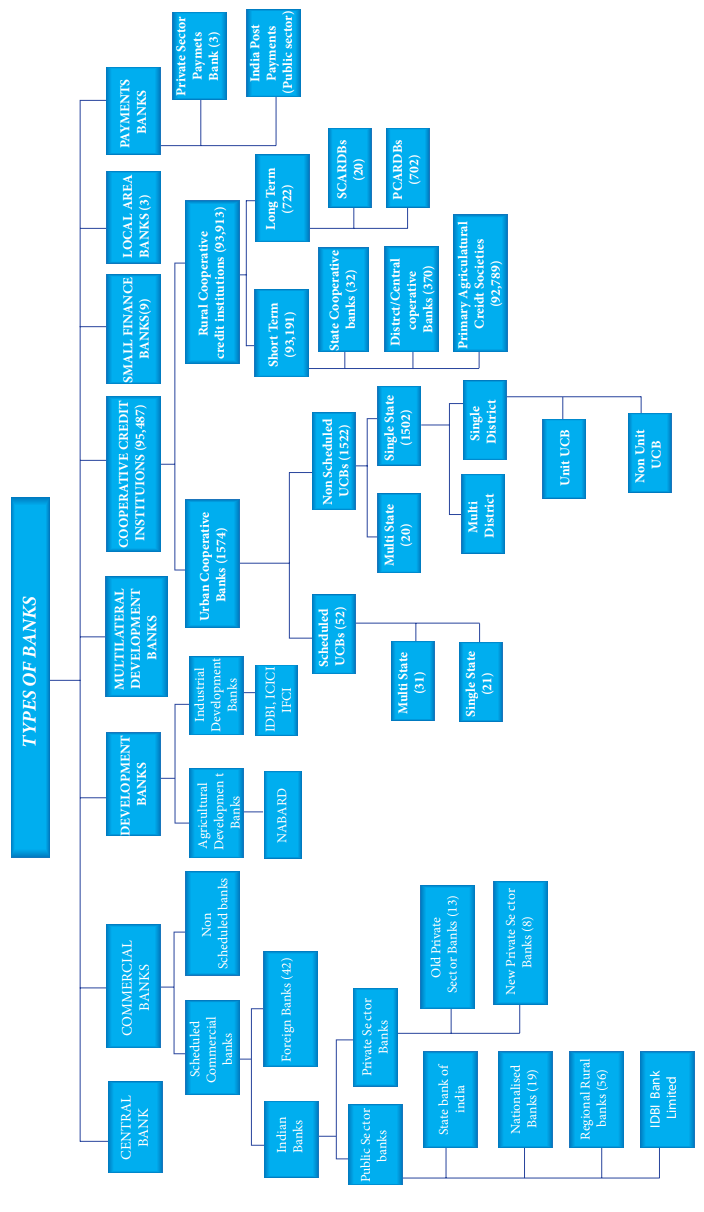