There are 4 types of Variable Scope, let’s discuss them one by one:

There are 4 types of Variable Scope, let’s discuss them one by one:

Local scope refers to variables defined in current function. Always, a function will first look up for a variable name in its local scope. Only if it does not find it there, the outer scopes are checked.

Look at this example

On execution of the above code the variable a displays the value 7, because it is defined and available in the local scope.

When a compiler or interpreter search for a variable in a program, it first search Local, and then search Enclosing scopes. Consider the following example 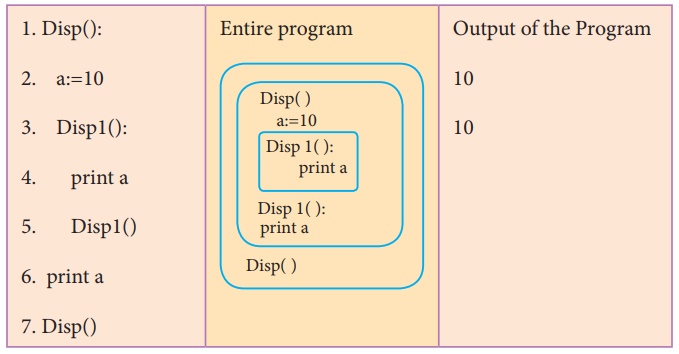 In the above example Disp1() is defined with in Disp(). The variable ‘a’ defined in Disp() can be even used by Disp1() because it is also a member of Disp().

Finally, we discuss about the widest scope. The built-in scope has all the names that are pre-loaded into the program scope when we start the compiler or interpreter. Any variable or module which is defined in the library functions of a programming language has Built-in or module scope. They are loaded as soon as the library files are imported to the program.

Normally only Functions or modules come along with the software, as packages.

Therefore they will come under Built in scope.