Plant hormones are organic molecules that are produced at extremely low concentration in plants. These molecules control morphological, physiological and biochemical responses.

Plant hormones are organic molecules that are produced at extremely low concentration in plants. These molecules control morphological, physiological and biochemical responses. 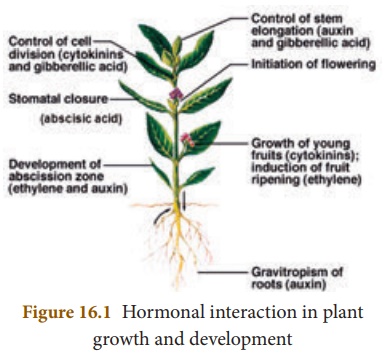 There are five major classes of plant hormones. They are:

Among all these plant hormones auxins, cytokinins and gibberellins promote plant growth while abscisic acid and ethylene inhibit plant growth.

Auxins (Gk. auxein = to grow) were the first plant hormones discovered. The term auxin was introduced by Kogl and Haagen-Smith (1931) . Auxins are produced at the tip of stems and roots from where they migrate to the zone of elongation. Charles Darwin (1880), observed unilateral growth and curvature of canary grass (Phalaris canariensis) coleoptiles. He came to the conclusion that some ‘influence’ was transmitted from the tip of the coleoptile to the basal region. This ‘influence’ was later identified as Auxin by Went.

Frits Warmolt Went (1903– 1990), a Dutch biologist demonstrated the existence and effect of auxin in plants. He did a series of experiments in Avena coleoptiles.

From his experiments Went concluded that a chemical diffusing from the tip of coleoptiles was responsible for growth, and he named it as “Auxin” meaning ‘to grow”. 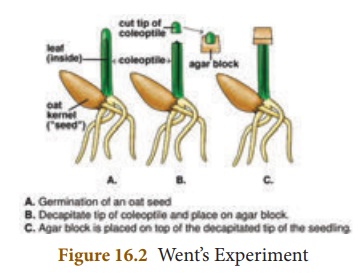 1. Auxins promote the elongation of stems and coleoptiles which makes them to grow. 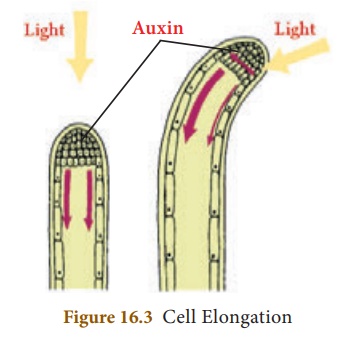 3. The auxins produced by the apical buds suppress growth of lateral buds. This is called apical dominance.

Cytokinins (Cytos - cell; kinesis - division) are the plant hormones that promote cell division or cytokinesis in plant cells. It was first isolated from Herring fish sperm. Zeatin was the cytokinin isolated from Zea mays. Cytokinin is found abundantly in liquid endosperm of coconut.

2. Both auxins and cytokinins are essential for the formation of new organs from the callus in tissue culture (Morphogenesis).

4. Cytokinins promote the growth of lateral buds even in the presence of apical bud.

5. Application of cytokinin delays the process of ageing in plants. This is called Richmond Lang effect.

Gibberellins are the most abundantly found plant hormones. Kurosawa (1926) observed Bakanae disease or foolish seedling disease in rice crops. This internodal elongation in rice was caused by fungus Gibberella fujikuroi. The active substance was identified as Gibberellic acid. 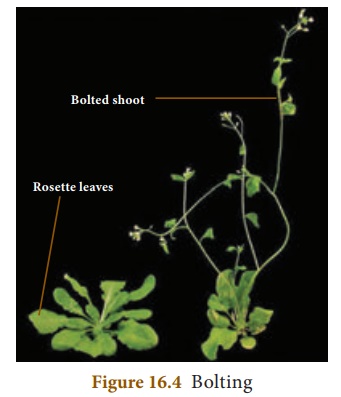 5. Gibberellins are efficient than auxins in inducing the formation of seedless fruit - Parthenocarpic fruits (Development of fruits without fertilization) e.g. Tomato.

Abscisic acid (ABA) is a growth inhibitor which regulates abscission and dormancy. It increases tolerance of plants to various kinds of stress. So, it is also called as stress hormone. It is found in the chloroplast of plants.

1.              ABA promotes the process of abscission (separation of leaves, flowers and fruits from the branch).

Ethylene is a gaseous plant hormone . It is a growth inhibitor. It is mainly concerned with maturation and ripening of fruits. Maximum synthesis of ethylene occurs during ripening of fruits like apples, bananas and melons

4.              Ethylene stimulates formation of abscission zone in leaves, flowers and fruits. This leads to premature shedding.