Endocrine glands present in human and other vertebrates are

The  pituitary gland or hypophysis is a pea shaped compact mass of cells located at the base of the midbrain attached to the hypothalamus by a pituitary stalk. The pituitary gland is anatomically composed of two lobes and perform different functions. 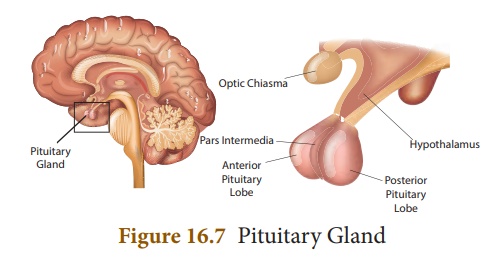 Hormones secreted by the anterior lobe (Adenohypophysis) of pituitary

GH promotes the development and enlargement of all tissues of the body. It stimulates the growth of muscles, cartilage and long bones. It controls the cell metabolism.

The improper secretion of this hormone leads to the following conditions.

Dwarfism: It is caused by decreased secretion of growth hormone in children. The characteristic features are stunted growth, delayed skeletal formation and mental disability.

Gigantism: Oversecretion of growth hormone leads to gigantism in children. It is characterised by overgrowth of all body tissues and organs. Individuals attain abnormal increase in height.

Acromegaly: Excess secretion of growth hormone in adults may lead to abnormal enlargement of head, face, hands and feet.

TSH controls the growth of thyroid gland, coordinates its activities and hormone secretion.

The gonadotropic hormones are follicle stimulating hormone and luteinizing hormone which are essential for the normal development of gonads.

In male, it stimulates the germinal epithelium of testes for formation of sperms. In female it initiates the growth of ovarian follicles and its development in ovary.

In male, it promotes the Leydig cells of the testes to secrete male sex hormone testosterone. In female, it causes ovulation (rupture of mature graafian follicle), responsible for the development of corpus luteum and production of female sex hormones estrogen and progesterone.

PRL is also called lactogenic hormone. This hormone initiates development of mammary glands during pregnancy and stimulates the production of milk after child birth.

Hormones secreted by the posterior lobe (Neurohypophysis) of pituitary

The hormones secreted by the posterior pituitary are

a. Vasopressin or Antidiuretic hormone (ADH)

In kidney tubules it increases reabsorption of water. It reduces loss of water through urine and hence the name antidiuretic hormone.

Deficiency of ADH reduces reabsorption of water and causes an increase in urine output (polyuria). This deficiency disorder is called Diabetes insipidus.

It helps in the contraction of the smooth muscles of uterus at the time of child birth and milk ejection from the mammary gland after child birth. 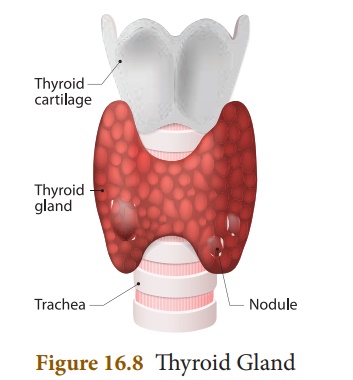 An amino acid tyrosine and iodine are involved in the formation of thyroid hormone. The hormones secreted by the thyroid gland are

b. Tetraiodothyronine or Thyroxine (T4)

The functions of thyroid hormones are

When the thyroid gland fails to secrete the normal level of hormones, the condition is called thyroid dysfunction. It leads to the following conditions

It is caused due to the decreased secretion of the thyroid hormones. The abnormal conditions are simple goitre, cretinism and myxoedema.

It is caused due to the inadequate supply of iodine in our diet. This is commonly prevalent in Himalayan regions due to low level of iodine content in the soil. It leads to the enlargement of thyroid gland which protrudes as a marked swelling in the neck and is called as goitre. 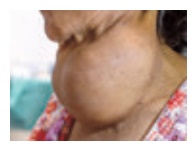 It is caused due to decreased secretion of the thyroid hormones in children. The conditions are stunted growth, mental defect, lack of skeletal development and deformed bones. They are called as cretins.

It is caused by deficiency of thyroid hormones in adults. They are mentally sluggish, increase in body weight, puffiness of the face and hand, oedematous appearance.

It is caused due to the excess secretion of the thyroid hormones which leads to Grave’s disease. The symptoms are protrusion of the eyeballs (Exopthalmia), increased metabolic rate, high body temperature, profuse sweating, loss of body weight and nervousness.

The parathyroid glands are four small oval bodies that are situated on the posterior surface of the thyroid lobes. The chief cells of the gland are mainly concerned with secretion of parathormone. 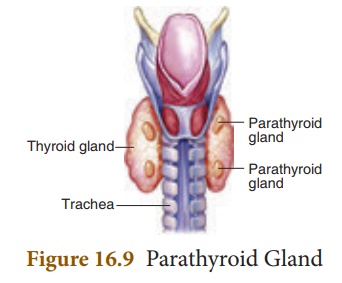 The parathormone regulates calcium and phosphorus metabolism in the body.They act on bone, kidney and intestine to maintain blood calcium levels.

The secretion of parathyroid hormone can be altered due to the following conditions.

Removal of parathyroid glands during thyroidectomy (removal of thyroid) causes decreased secretion of parathormone. The conditions are

Pancreas is an elongated, yellowish gland situated in the loop of stomach and duodenum. It is exocrine and endocrine in nature. The exocrine pancreas secretes pancreatic juice which plays a role in digestion while, the endocrine portion is made up of Islets of Langerhans. 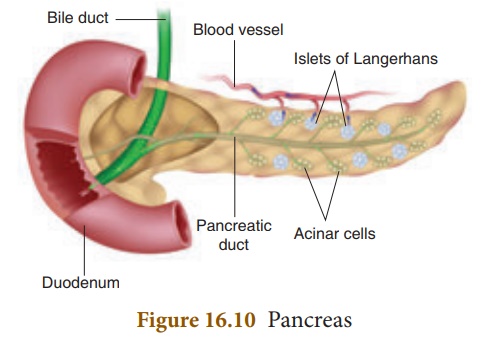 A balance between insulin and glucagon production is necessary to maintain blood glucose concentration.

·                 Insulin helps in the conversion of glucose into glycogen which is stored in liver and skeletal muscles.

The deficiency of insulin causes Diabetes mellitus. It is characterised by

The adrenal glands are located above each kidney. They are also called supra renal glands. 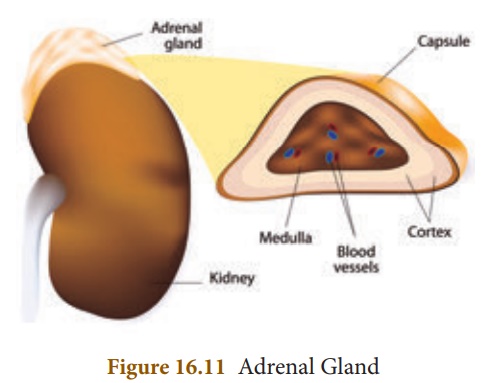 The adrenal cortex consists of three layers of cells. They are zona glomerulosa, zona fasciculata and zona reticularis

The hormones secreted by the adrenal cortex are corticosteroids. They are classified into

The glucocorticoids secreted by the zona fasciculata are cortisol and corticosterone

The mineralocorticoids secreted by zona glomerulosa is aldosterone

The adrenal medulla is composed of chromaffin cells .They are richly supplied with sympathetic and parasympathetic nerves.

They are together called as “Emergency hormones”. It is produced during conditions of stress and emotion. Hence it is also referred as “flight, fright and fight hormone”.

Most of its actions are similar to those of epinephrine.

Testes are the reproductive glands of the males. They are composed of seminiferous tubules, Leydig cells and Sertoli cells. Leydig cells form the endocrine part of the testes. They secrete the male sex hormone called testosterone.

·                 It is responsible for the development of secondary sexual characters (distribution of hair on body and face, deep voice pattern, etc).

The ovaries are the female gonads located in the pelvic cavity of the abdomen. They secrete the female sex hormones

Estrogen is produced by the Graafian follicles of the ovary and progesterone from the corpus luteum that is formed in the ovary from the ruptured follicle during ovulation.

Thymus is partly an endocrine gland and partly a lymphoid gland. It is located in the upper part of the chest covering the lower end of trachea. Thymosin is the hormone secreted by thymus. 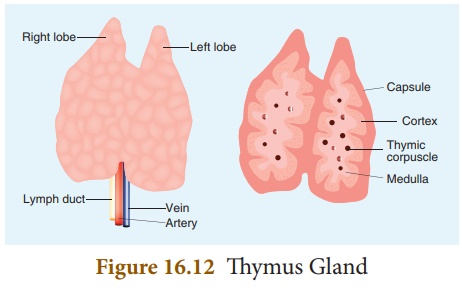