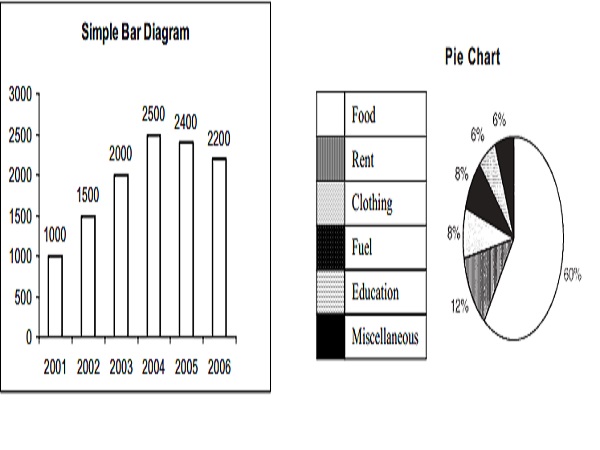 The followings are the important types of diagrams Bar diagrams, Pie chart or circular diagram, Pictograms and cartograms.

One of the most attractive ways in which statistical results may be presented is through diagrams and graphs.

Significance of Diagrams and Graphs

Diagrams and graphs are extremely useful because of the following reasons:

They give a bird's eye view of the entire data. Therefore the information presented is easily understood.

They are attractive to the eye

They have a great memorising effect.

They facilitate comparison of data.

Difference between Diagrams and Graphs

The followings are the important types of diagrams

Bar diagrams are one-dimensional diagrams where the length is considered and width is not considered. There are different types of bar diagrams.

A simple bar diagram is used to represent only one variable. For example, the figures of sales, height, weight of students, production and population. In simple bar, the height of the bar represents the magnitude of the variable.

Pie diagram is used to represent the components of a variable. For example Pie chart can show the household expenditure, which is divided under different heads like food, clothing, electricity, education and recreation. The pie chart is called so, because the entire graph looks like pie and the components resemble slice cut from pie.

Steps to draw a pie chart

Draw a circle of appropriate size with a compass. The size of the radius depends upon the available space and other factors of presentation.

Measure the points on the circle representing the size of each sector with the help of protractor.

Arrange the sectors according to the size

Different shades and proper labels must be given to different sectors.

One of the important objectives of statistical analysis is to get one single value that describes the characteristics of the entire data. Such a value is called central value or an average.

Thus a central value or an average is a single value that represents a group of values. That single value (the average) explains the characteristics of the entire group. As the average lies in-between the largest and the smallest value of the series, it is called central value.

Characteristics of a good average

It should be rigidly defined so that there is no confusion regarding its meaning.

It should be easy to understand

It should be simple to compute

Its definition must be in the form of a mathematical formula.

It should be based on all the items of a series

It should be capable of further algebraic treatment

It should have sampling stability

It is the most common type and widely used measure of central tendency. Arithmetic mean of a series is equal to the total value of the various items in a series divided by the number of items. Arithmetic mean is denoted by X (X bar)