Francois viete (1540-1603) introduced the first systematic algebraic notation and contributed to the theory of equations.

Francois viete (1540-1603) introduced the first systematic algebraic notation and contributed to the theory of equations.Two French mathematicians-philosophers Rene´ Descartes and Pierre de Fermat independently founded analytical geometry in the-1630s by adapting Francois viete’s algebra to the study of geometric loci. Descartes established analytical geometry as“a way of visualizing algebraic formulas” and developed the coordinate system as “a device to locate points on a plane”. His main achievement was to bridge the gap between algebra and geometry. With regard to algebra, he explained in detail that how algebraic equations can be expressed and explained through the use of geometrical shapes. Analytical geometry is a great invention of Descartes and Fermat. Cartesian geometry, the alternative term used for analytical geometry is named after him. 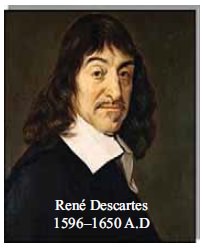 From the17th century onwards, mathematics is being developed in two directions: pure and applied mathematics. One of the first areas of applied mathematic studied in the 17th century was the motion of an object in a straight line. The straight line graphs can be used in the fields of study as diverse as business, economics, social sciences, physics, and medicine. The problem of the shortest line plays a chief and historically important role in the foundations of geometry.

Given a real-world problem, our first task is to formulate the problem using the language of mathematics. Many techniques are used in the construction of mathematical models. Let us see how linear equations (models) can be constructed from a given set of information and solved using appropriate mathematical techniques. Consider some of the real-world, simple problems as illustrated below:

Real life situation 6.2: Suppose the Government has decided to erect a new Electrical Power Trans-mission Substation to provide better power supply to two villages namely A and B. The substation has to be on the line l. The distances of villages A and B from the foot of the perpendiculars P and Q on the line l are 3 km and 5 km respectively and the distance between P and Q is 6 km. How to calculate the smallest length of cable required to connect the two villages (or the roads that connect  the villages as well as the power station) from the power station and to find the equations of the cable lines (or roads) that connect the power station to two villages. 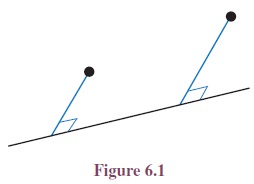 Consider a hollow cylindrical vessel, with circumference 24 cm and height 10 cm. An ant is located on the outside of vessel 4 cm from the bottom. There is a drop of honey at the diagrammatically opposite inside of the vessel, 3 cm from the top. What is the shortest distance the ant would need to crawl to get the honey? What is the equation of the path traced out by the ant. Here is a picture that illustrates the position of the ant and the honey.

Real life situation 6.4: The quantity demanded of a certain type of Compact Disk is 22,000 units when a unit price is Rs.

8. The customer will not buy the disk, at a unit price of Rs.

30 or higher. On the other side the manufacturer will not market any disk if the price is Rs.

6 or lower. However, if the price is Rs.

14 the manufacturer can supply 24,000 units. Assume that the quantity demanded and quantity supplied are linearly proportional to the price. How to find (i) the demand equation (ii) supply equation (iii) the market equilibrium quantity and price. (iv) The quantity of demand and supply when the price is Rs.

The equation of the straight line for each of the problems stated above, not only solves the specific case of solutions but also helps us get many information through it. Later, in this chapter, let us try to solve these types of problems by using the concepts of straight lines. In order to understand the straight line, we need to get acquainted with some of its basic concepts.