Distributed systems are undergoing a period of significant change and this can be traced back to a number of influential trends:

Distributed systems are undergoing a period of significant change and this can be traced back to a number of influential trends:

o   the emergence of ubiquitous computing coupled with the desire to support user mobility in distributed systems;

o   the view of distributed systems as a utility.

The modern Internet is a vast interconnected collection of computer networks of many different types, with the range of types increasing all the time and now including, for example, a wide range of wireless communication technologies such as WiFi, WiMAX, Bluetooth and third-generation mobile phone networks. The net result is that networking has become a pervasive resource and devices can be connected (if desired) at any time and in any place. 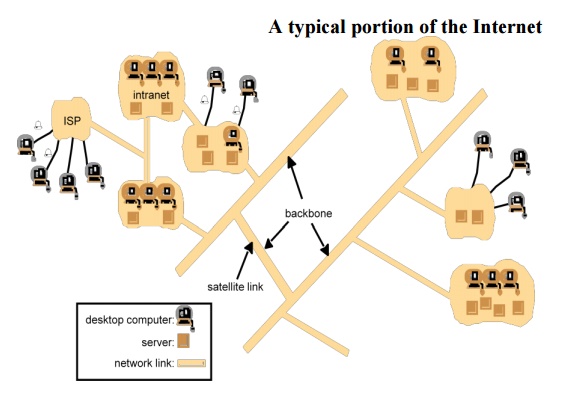 The Internet is also a very large distributed system. It enables users, wherever they are, to make use of services such as the World Wide Web, email and file transfer. (Indeed, the Web is sometimes incorrectly equated with the Internet.) The set of services is open-ended – it can be extended by the addition of server computers and new types of service. The figure shows a collection of intranets – subnetworks operated by companies and other organizations and typically protected by firewalls. The role of a firewall is to protect an intranet by preventing unauthorized messages from leaving or entering. A firewall is implemented by filtering incoming and outgoing messages. Filtering might be done by source or destination, or a firewall might allow only those messages related to email and web access to pass into or out of the intranet that it protects. Internet Service Providers (ISPs) are companies that provide broadband links and other types of connection to individual users and small organizations, enabling them to access services anywhere in the Internet as well as providing local services such as email and web

hosting. The intranets are linked together by backbones. A backbone is a network link with a high transmission capacity, employing satellite connections, fibre optic cables and other high-bandwidth circuits 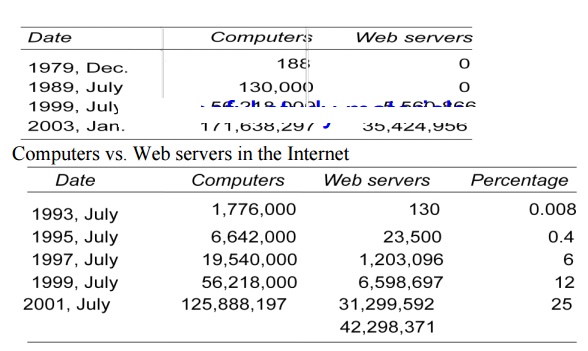 o   Be connected to the Internet via a router 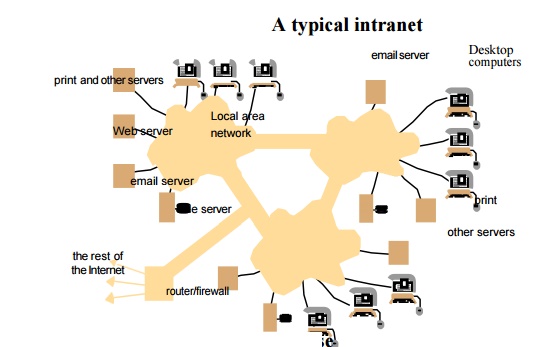 o   The cost of software installation and support

Technological advances in device miniaturization and wireless networking have led increasingly to the integration of small and portable computing devices into distributed systems. These devices include:

o   Wearable devices, such as smart watches with functionality similar to a PDA.

The portability of many of these devices, together with their ability to connect conveniently to networks in different places, makes mobile computing possible. Mobile computing is the performance of computing tasks while the user is on the move, or visiting places other than their usual environment. In mobile computing, users who are away from their ‘home’ intranet (the intranet at work, or their residence) are still provided with access to resources via the devices they carry with them. They can continue to access the Internet; they can continue to access resources in their home intranet; and there is increasing provision for users to utilize resources such as printers or even sales points that are conveniently nearby as they move around. The latter is also known as location-aware or context-aware computing. Mobility introduces a number of challenges for distributed systems, including the need to deal with variable connectivity and indeed disconnection, and the need to maintain operation in the face of device mobility.

Portable and handheld devices in a distributed system 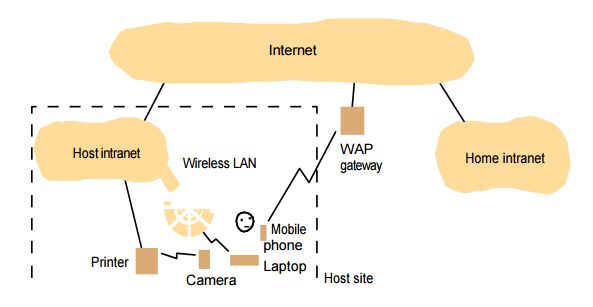 Ubiquitous computing is the harnessing of many small, cheap computational devices that are present in users’ physical environments, including the home, office and even natural settings. The term ‘ubiquitous’ is intended to suggest that small computing devices will eventually become so pervasive in everyday objects that they are scarcely noticed. That is, their computational behaviour will be transparently and intimately tied up with their physical function.

The presence of computers everywhere only becomes useful when they can communicate with one another. For example, it may be convenient for users to control their washing machine or their entertainment system from their phone or a ‘universal remote control’ device in the home. Equally, the washing machine could notify the user via a smart badge or phone when the washing is done.

Ubiquitous and mobile computing overlap, since the mobile user can in principle benefit from computers that are everywhere. But they are distinct, in general. Ubiquitous computing could benefit users while they remain in a single environment such as the home or a hospital. Similarly, mobile computing has advantages even if it involves only conventional, discrete computers and devices such as laptops and printers.