A distributed system is a software system in which components located on networked computers communicate and coordinate their actions by passing messages. The components interact with each other in order to achieve a common goal.

A distributed system is a software system in which components located on networked computers communicate and coordinate their actions by passing messages. The components interact with each other in order to achieve a common goal.

A distributed system consists of a collection of autonomous computers, connected through a network and distribution middleware, which enables computers to coordinate their activities and to share the resources of the system, so that users perceive the system as a single, integrated computing facility.

·        One component with non-autonomous parts

o   computer networks such as the Internet,

Certain common characteristics can be used to assess distributed systems

o   Ability to use any hardware, software or data anywhere in the system.

o   they are used and

o   provider and user interact with each other.

o   Openness is concerned with extensions and improvements of distributed systems.

o   Detailed interfaces of components need to be published.

o   New components have to be integrated with existing components.

o   Differences in data representation of interface types on different processors (of different vendors) have to be resolved.

Components in distributed systems are executed in concurrent processes.

Integrity of the system may be violated if concurrent updates are not coordinated. o Lost updates

o   Adaption of distributed systems to

o   respond faster (this is the hard one)

o   Components should not need to be changed when scale of a system increases.

o   Design components to be scalable

o   Distributed systems must maintain availability even at low levels of hardware/software/network reliability.

o   Fault tolerance is achieved by

o   Distributed systems should be perceived by users and application programmers as a whole rather than as a collection of cooperating components.

o   Transparency has different dimensions that were identified by ANSA.

o   These represent various properties that distributed systems should have.

o   Example: Navigation in the Web.

Enables information objects to be accessed without knowledge of their location.

o   Example: Pages in the Web

o   Enables the concealment of faults

o   Allows users and applications to complete their tasks despite the failure of other components.

Allows the system to be reconfigured to improve performance as loads vary. 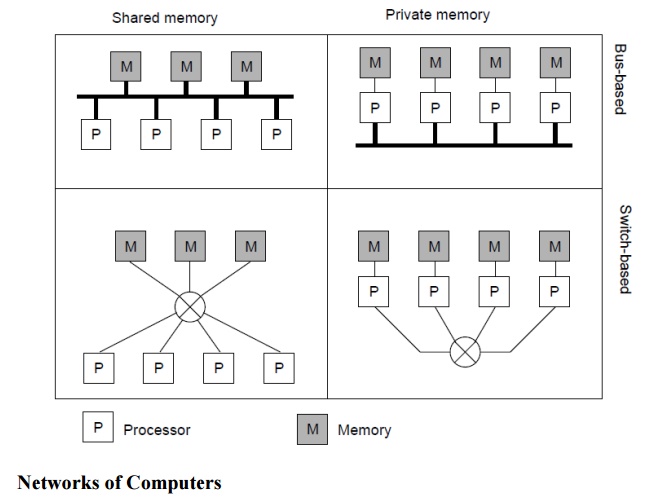 _ OS on each computer knows about the other computers 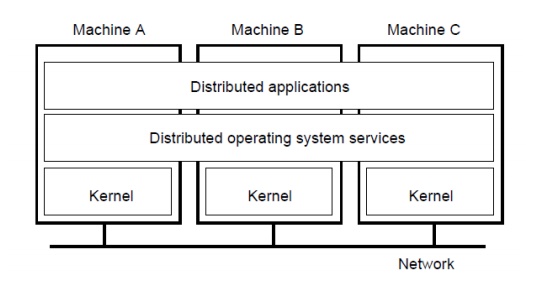 _ Each computer has its own operating system with networking facilities

_ Computers work independently (i.e., they may even have different operating systems)

_ OS on different computers need not generally be the same 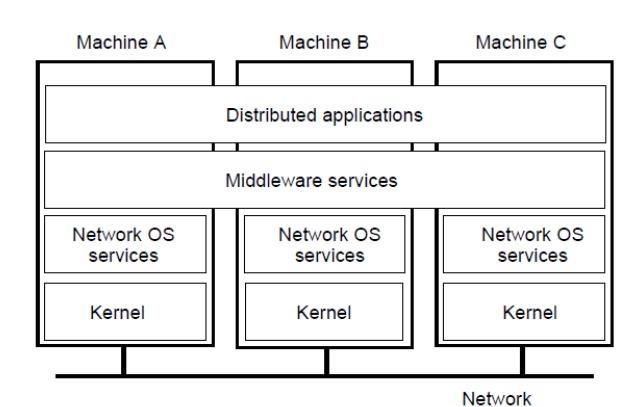 Motivation: Too many networked applications were hard or difficult to integrate:

_ Integration and interoperability only at level of primitive NOS services

Combining different databases, but providing a single view to applications

_ Constraint: use the existing operating systems, and treat them as the underlying environment (they provided the basic functionality anyway)

Control services: Services giving applications control over when, where, and how they access data:

Comparison of DOS, NOS, and Middleware 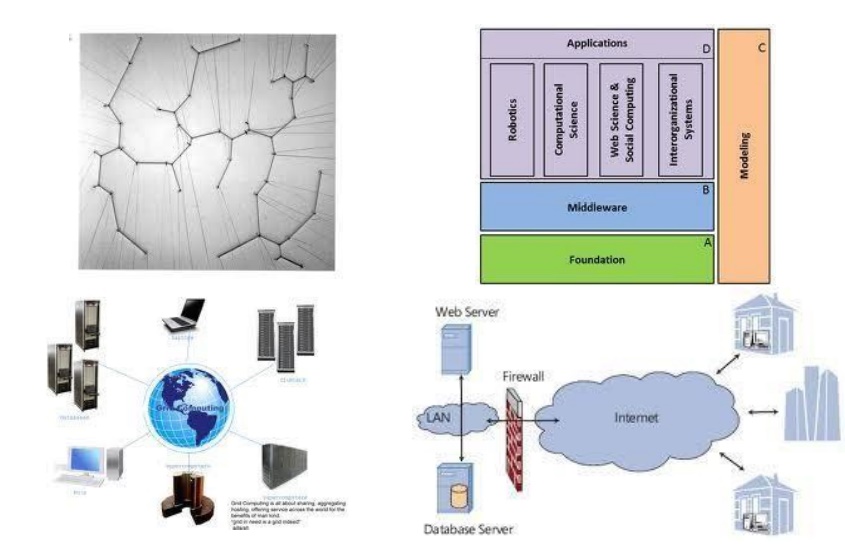 Networks of computers are everywhere. The Internet is one, as are the many networks of which it is composed. Mobile phone networks, corporate networks, factory networks, campus networks, home networks, in-car networks – all of these, both separately and in combination, share the essential characteristics that make them relevant subjects for study under the heading distributed systems.

Concurrency: In a network of computers, concurrent program execution is the norm. I can do my work on my computer while you do your work on yours, sharing resources such as web pages or files when necessary. The capacity of the system to handle shared resources can be increased by adding more resources (for example. computers) to the network. We will describe ways in which this extra capacity can be usefully deployed at many points in this book. The coordination of concurrently executing programs that share resources is also an important and recurring topic.

No global clock: When programs need to cooperate they coordinate their actions by exchanging messages. Close coordination often depends on a shared idea of the time at which the programs’ actions occur. But it turns out that there are limits to the accuracy with which the computers in a network can synchronize their clocks – there is no single global notion of the correct time. This is a direct consequence of the fact that the only communication is by sending messages through a network.

Independent failures: All computer systems can fail, and it is the responsibility of system designers to plan for the consequences of possible failures. Distributed systems can fail in new ways. Faults in the network result in the isolation of the computers that are connected to it, but that doesn’t mean that they stop running. In fact, the programs

on them may not be able to detect whether the network has failed or has become unusually slow. Similarly, the failure of a computer, or the unexpected termination of a program somewhere in the system (a crash), is not immediately made known to the other components with which it communicates. Each component of the system can fail independently, leaving the others still running.