The primary medical treatment for schizophrenia is psychopharmacology.

The primary medical treatment for schizophrenia is psychopharmacology. In the past, electroconvulsive therapy, insulin shock therapy, and psychosurgery were used, but since the creation of chlorpromazine (Thorazine) in 1952, other treatment modalities have become all but obsolete. Antipsychotic medications, also known as neuroleptics, are prescribed primarily for their efficacy in decreasing psy-chotic symptoms. They do not cure schizophrenia; rather, they are used to manage the symptoms of the disease.

The older, or conventional, antipsychotic medications are dopamine antagonists. The newer, or atypical, antipsy-chotic medications are both dopamine and serotonin antag-onists . These medications, usual daily dos-ages, and their common side effects are listed in Table 14.1. The conventional antipsychotics target the positive signs of schizophrenia, such as delusions, hallucinations, disturbed thinking, and other psychotic symptoms, but have no observable effect on the negative signs. The atypical antip-sychotics not only diminish positive symptoms but also, for many clients, lessen the negative signs of lack of voli-tion and motivation, social withdrawal, and anhedonia. 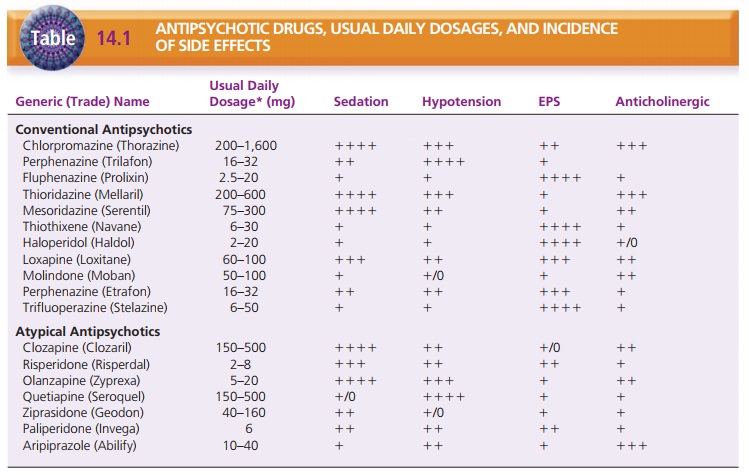 Two antipsychotics are available in depot injection forms for maintenance therapy: fluphenazine (Prolixin) in decanoate and enanthate preparations and haloperidol (Haldol) in decanoate. The vehicle for depot injections is sesame oil; therefore, the medications are absorbed slowly over time into the client’s system. The effects of the medi-cations last 2 to 4 weeks, eliminating the need for daily oral antipsychotic medication . The dura-tion of action is 7 to 28 days for fluphenazine and 4 weeks for haloperidol. It may take several weeks of oral therapy with these medications to reach a stable dosing level before the transition to depot injections can be made. Therefore, these preparations are not suitable for the management of acute episodes of psychosis. They are, however, very use-ful for clients requiring supervised medication compliance over an extended period.

The side effects of antipsychotic medications are significant and can range from mild discomfort to permanent move-ment disorders (Kane & Marder, 2005). Because many of these side effects are frightening and upsetting to clients, they are frequently cited as the primary reason that clients discontinue or reduce the dosage of their medications. Seri-ous neurologic side effects include extrapyramidal side effects (EPS) (acute dystonic reactions, akathisia, and par-kinsonism), tardive dyskinesia, seizures, and neuroleptic malignant syndrome (NMS; discussion to follow). Nonneu-rologic side effects include weight gain, sedation, photosen-sitivity, and anticholinergic symptoms such as dry mouth, blurred vision, constipation, urinary retention, and orthos-tatic hypotension. Table 14.2 lists the side effects of antipsy-chotic medications and appropriate nursing intervention. 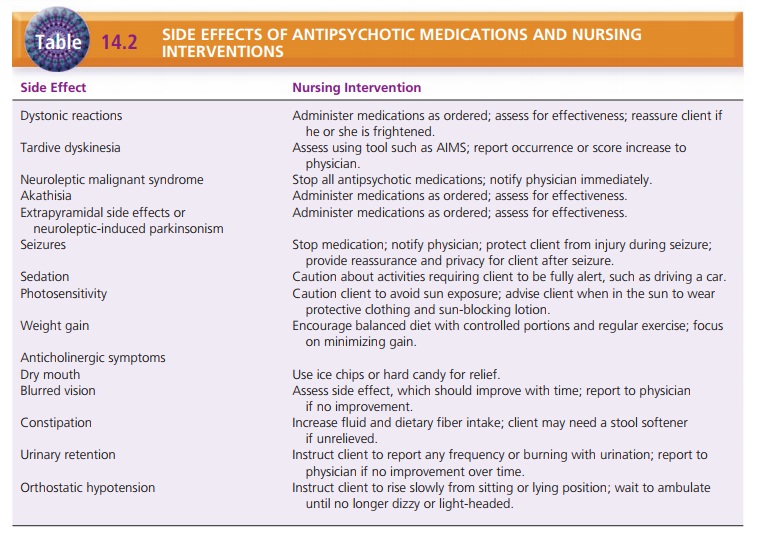 Dystonic reactions to antipsychotic medications appearearly in the course of treatment and are characterized by spasms in discrete muscle groups such as the neck muscles (torticollis) or eye muscles (oculogyric crisis). These spasms also may be accompanied by protrusion of the tongue, dys-phagia, and laryngeal and pharyngeal spasms that can com-promise the client’s airway, causing a medical emergency. Dystonic reactions are extremely frightening and painful for the client. Acute treatment consists of diphenhydramine (Benadryl) given either intramuscularly or intravenously, or benztropine (Cogentin) given intramuscularly.

Pseudoparkinsonism, or neuroleptic-induced parkin-sonism, includes a shuffling gait, mask-like facies, muscle stiffness (continuous) or cogwheeling rigidity (ratchet-like movements of joints), drooling, and akinesia (slowness and difficulty initiating movement). These symptoms usually appear in the first few days after starting or increasing the dosage of an antipsychotic medication. Treatment of pseu-doparkinsonism and prevention of further dystonic reac-tions are achieved with the medications listed in Table 14.3. 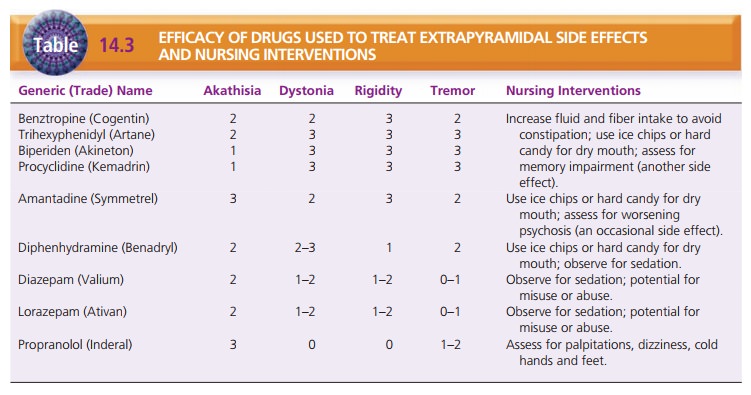 Akathisia is characterized by restless movement, pac-ing, inability to remain still, and the client’s report of inner restlessness. Akathisia usually develops when the antipsy-chotic is started or when the dose is increased. Clients are very uncomfortable with these sensations and may stop taking the antipsychotic medication to avoid these sideeffects. Beta-blockers such as propranolol have been most effective in treating akathisia, whereas benzodiazepines have provided some success as well.

The early detection and successful treatment of EPS is very important in promoting the client’s compliance with medication. The nurse is most often the person who observes these symptoms or the person to whom the client reports symptoms. To provide consistency in assessment among nurses working with the client, a standardized rating scale for extrapyramidal symptoms is useful. The Simpson–Angus scale for EPS is one tool that can be used.

Tardive Dyskinesia. Tardive dyskinesia, a late-appearing side effect of antipsychotic medications, is characterized by abnormal, involuntary movements such as lip smack-ing, tongue protrusion, chewing, blinking, grimacing, and choreiform movements of the limbs and feet. These invol-untary movements are embarrassing for clients and may cause them to become more socially isolated. Tardive dyskinesia is irreversible once it appears, but decreasing or discontinuing the medication can arrest the progression. Clozapine (Clozaril), an atypical antipsychotic drug, has not been found to cause this side effect, so it often is rec-ommended for clients who have experienced tardive dys-kinesia while taking conventional antipsychotic drugs.

Screening clients for late-appearing movement disor-ders such as tardive dyskinesia is important. The Abnor-mal Involuntary Movement Scale (AIMS) is used to screen for symptoms of movement disorders. The client is observed in several positions, and the severity of symp-toms is rated from 0 to 4. The AIMS can be administered every 3 to 6 months. If the nurse detects an increased score on the AIMS, indicating increased symptoms of tardive dyskinesia, he or she should notify the physician so that the client’s dosage or drug can be changed to prevent advancement of tardive dyskinesia.

Agranulocytosis. Clozapine has the potentially fatal side effect of agranulocytosis (failure of the bone marrow to produce adequate white blood cells). Agranulocytosis develops suddenly and is characterized by fever, malaise, ulcerative sore throat, and leukopenia. This side effect may not be manifested immediately but can occur as long as 18 to 24 weeks after the initiation of therapy. The drug must be discontinued immediately. Clients taking this an-tipsychotic must have weekly white blood cell counts for the first 6 months of clozapine therapy and every 2 weeks thereafter. Clozapine is dispensed every 7 or 14 days only, and evidence of a white cell count above 3,500 cells/mm3 is required before a refill is furnished. 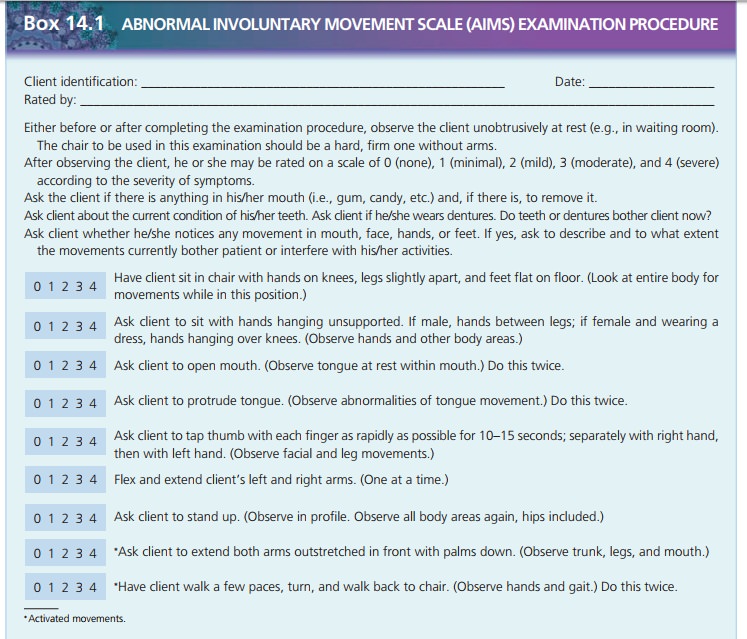 In addition to pharmacologic treatment, many other modes of treatment can help the person with schizophrenia. Indi-vidual and group therapies, family therapy, family educa-tion, and social skills training can be instituted for clients in both inpatient and community settings.

Individual and group therapy sessions are often sup-portive in nature, giving the client an opportunity for social contact and meaningful relationships with other people. Groups that focus on topics of concern such as medication management, use of community supports, and family concerns also have been beneficial to clients with schizophrenia (Pfammatter, Junghan, & Brenner, 2006).

Moriana, Alarcon, and Herruzo (2006) found that psycho-social skill training was more effective when carried out during in-home visits in the client’s own environment rather than in an outpatient setting.

A new therapy, cognitive enhancement therapy (CET), combines computer-based cognitive training with group sessions that allow clients to practice and develop social skills. This approach is designed to remediate or improve the clients’ social and neurocognitive deficits, such as attention, memory, and information processing. The expe-riential exercises help the client to take the perspective of another person, rather than focus entirely on self. Positive results of CET include increased mental stamina, active rather than passive information processing, and spontane-ous and appropriate negotiation of unrehearsed social challenges (Hogarty, Greenwald, & Eack, 2006).

Family education and therapy are known to diminish the negative effects of schizophrenia and reduce the relapse rate (Penn, Waldheter, Perkins, Mueser, & Lieberman, 2005). Although inclusion of the family is a factor that improves outcomes for the client, family involvement often is neglected by health-care professionals. Families often have a difficult time coping with the complexities and ramifications of the client’s illness. This creates stress among family members that is not beneficial for the client or family members. Family education helps to make fam-ily members part of the treatment team.

In addition, family members can benefit from a support-ive environment that helps them cope with the many diffi-culties presented when a loved one has schizophrenia. These concerns include continuing as a caregiver for the child who is now an adult; worrying about who will care for the client when the parents are gone; dealing with the social stigma of mental illness; and possibly facing financial problems, marital discord, and social isolation. Such sup-port is available through the National Alliance for the Men-tally Ill and local support groups. The client’s health-care provider can make referrals to meet specific family needs.