Transfer of property (ownership) in goods from the seller to the buyer is the main object of a contract of sale. 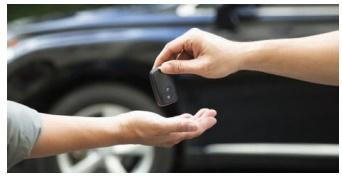 For eg. ‘A’ may possess a watch. Just because ‘A’ possesses the watch, he cannot be owner. He might have borrowed the watch from his friend or stolen the watch from somebody or found it on the highways. In this case, he cannot be called owner. It is important to know the precise movement of time at which the ownership in goods passes from seller to buyer.

Transfer of title of a property is called as passing of property. 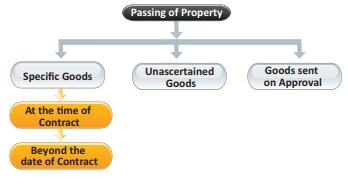 (i) At the Time of Contract

Where there is an unconditional contract for the sale of specific goods in a deliverable state, ownership in the goods passes to the buyer when the contract is made. The time of payment of price or time of delivery of goods is immaterial in the matter of transferring the ownership of the goods.

eg. ‘B’ selects certain books in a bookshop. The price is settled. ‘B’ arranges to take delivery of books next day through his servant and agrees to pay for the books on the 1st of next month. The books were destroyed by fire in the same evening. In this case, ‘B’ has to bear the loss and pay for the books selected since the ownership has already passed on to ‘B’.

(ii) Beyond the Date of Contract

(a) Goods not in a Deliverable condition

Where there is a contract for the sale of specific goods in a deliverable condition, but the seller is yet to weigh, measure, test or do some other act or think with reference to the goods for the purpose of fixing the price, then the ownership in the goods passes to the buyer only after such activities are carried out and completed and the buyer has a knowledge of it.

eg. ‘A’ sold some quantity of wheat to ‘B’ at the rate of Rs. 10 per kg. However, ‘A’ had to weigh the wheat in order to know the price of the entire quantity of wheat sold to ‘B’. In this case, the ownership of the wheat shall transfer to ‘B’ as soon as ‘A’ weighs the wheat ‘B’ comes to know about the completion of the weighing activity.

As already we studied that the unascertained goods are those which are not specifically identified at the time of contract of sale. The ownership in the case of unascertained goods, is transferred to the buyer subject to the fulfilment of following conditions:

a. When the Goods are Ascertained

Ascertainment is a process by which the goods to be delivered under the contract of sale are identified and set apart. It is a unilateral act of the seller alone to identify and isolate the goods.

b. When the Goods are Appropriated to the Contract

Appropriation is a process by which the goods to be delivered under the contract of sale are identified and isolated with the consent of the seller as well as the buyer. It is a bilateral act of the seller and the buyer to identify and isolate the goods. In other words, where the goods identified and isolated are put into boxes or any container with the consent of the buyer, it is called appropriation. eg. ‘A’ agrees to sell ‘B’ the oil to be produced by him. The oil was filled by ‘A’ into the bottles supplied by ‘B’. It is an effective appropriation and the ownership of oil goods passes to the buyer when the oil is filled into the bottles. In this case, the buyer gave his consent to the appropriation by supplying the bottles.

c. Delivery to the Carrier

Where the seller delivers the goods to a carrier for the purpose of transmission to the buyer, he is deemed to have unconditionally appropriated the goods to the contract. But the only condition is that the seller should not have reserved the right of disposal of the goods.Where the railway receipt or the bill of lading is made out in the name of the buyer, the presumption is that the seller has not reserved the right of disposal of the goods. The property in such goods passes to the buyer immediately on delivering them to the carrier.

III. Goods Sent ‘On Approval’ or ‘On Sale or Return’ Basis

Goods sent on approval or on sale or return basis mean those goods in respect of which the buyer has option either to return or retain. 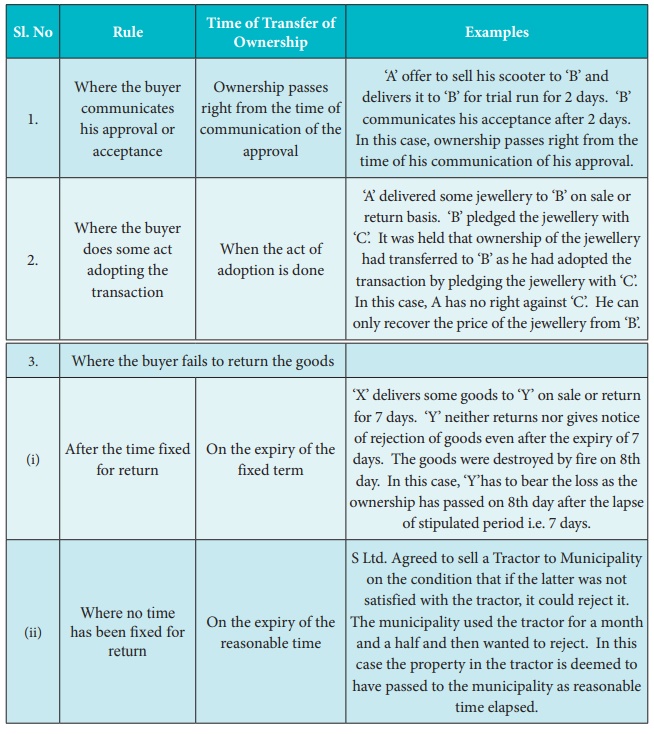 Rule: Where the buyer communicates his approval or acceptance

Time of Transfer of Ownership : Ownership passes right from the time of communication of the approval

Examples: ‘A’ offer to sell his scooter to ‘B’ and delivers it to ‘B’ for trial run for 2 days. ‘B’ communicates his acceptance after 2 days. In this case, ownership passes right from the time of his communication of his approval.

Rule: Where the buyer does some act adopting the transaction

Time of Transfer of Ownership : When the act of adoption is done

3. Where the buyer fails to return the goods

Rule: (i) After the time fixed for return

Time of Transfer of Ownership : On the expiry of the fixed term

Examples: ‘X’ delivers some goods to ‘Y’ on sale or return for 7 days. ‘Y’ neither returns nor gives notice of rejection of goods even after the expiry of 7 days. The goods were destroyed by fire on 8th day. In this case, ‘Y’has to bear the loss as the ownership has passed on 8th day after the lapse of stipulated period i.e. 7 days.

Rule: (ii) Where no time has been fixed for return

Time of Transfer of Ownership : On the expiry of the reasonable time

Examples: S Ltd. Agreed to sell a Tractor to Municipality on the condition that if the latter was not satisfied with the tractor, it could reject it. The municipality used the tractor for a month and a half and then wanted to reject. In this case the property in the tractor is deemed to have passed to the municipality as reasonable time elapsed.