Action, or series of actions, carried out by user or application, which accesses or changes contents of database.

Action, or series of actions, carried out by user or application, which accesses or changes contents of database. It Transforms database from one consistent state to another, although consistency may be violated during transaction

A transaction may be stand-alone set of operations specified in a high level language like SQL submitted interactively, or may be embedded within a program.

A transaction must see a consistent database.

During transaction execution the database may be inconsistent.

When the transaction is committed, the database must be consistent.

An application program may contain several transactions separated by the Begin and End transaction boundaries.

Why Do We Need Transactions?

It’s  all  about  fast  query  response  time  and  correctness

DBMS is a multi-user systems

How does DBMS know which actions belong together?

Group database operations that must be performed together into transactions

Either execute all operations or none

Basic unit of data transfer from the disk to the computer main memory is one block. In general, a data item (what is read or written) will be the field of some record in the database, although it may be a larger unit such as a record or even a whole block.

1.     Find the address of the disk block that contains item X.

3.     Copy item X from the buffer to the program variable named X. 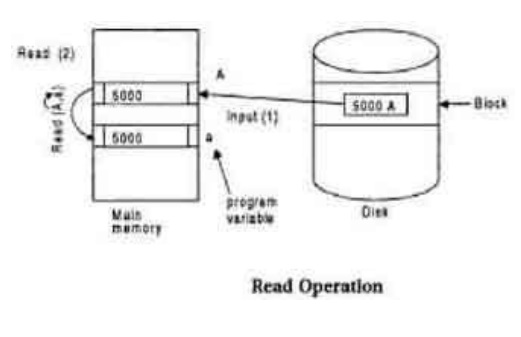 1.     Find the address of the disk block that contains item X.

3.     Copy item X from the program variable named X into its correct location in the buffer.

4.     Store the updated block from the buffer back to disk (either immediately or at some later point in time 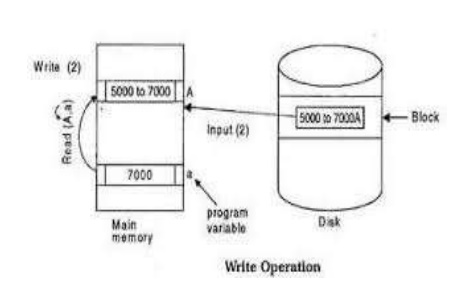 Issues to deal with:

o Failures of various kinds, such as hardware failures and system crashes

A transaction is an atomic unit of work that is either completed in its entirety or not done at all. For recovery purposes, the system needs to keep track of when the transaction starts, terminates, and commits or aborts.

A transaction can be in one of several states:

Active - Reading and Writing data items ,if something wrong happens during reading and writing aborts to Failed.

Partially Committed - All reading and writing operations are done aborts to Failed when rollback occurs or committed when commit occurs.

Failed - Transaction halted and all operations rolled back

Terminated - terminates either commits or failed 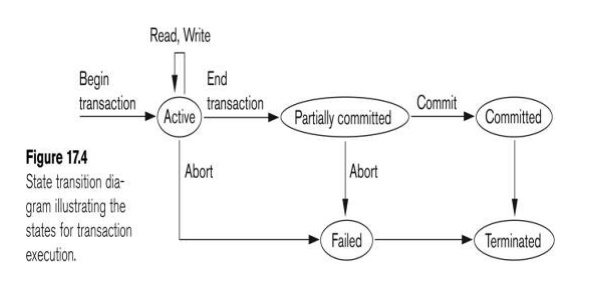 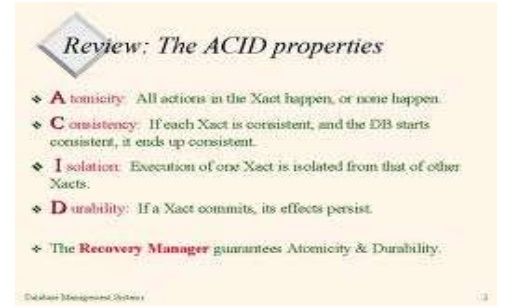 To preserve the integrity of data, the database system must ensure:

Atomicity. Either all operations of the transaction are properly reflected in the database or none are.

Consistency. Execution of a transaction in isolation preserves the consistency of the database.

Durability. After a transaction completes successfully, the changes it has made to the database persist, even if there are system failures.

1.     if the transaction fails after step 3 and inconsistent database state

2.     The system should ensure that updates of a partially executed transaction are not reflected in the database

once the user has been notified that the transaction has completed (i.e., the transfer of the $50 has taken place), the updates to the database by the transaction must persist even if there are software or hardware failures.

In general, consistency requirements include

A transaction must see a consistent database.

During transaction execution the database may be temporarily inconsistent.

When the transaction completes successfully the database must be consistent

if between steps 3 and 6, another transaction T2 is allowed to access the partially updated database, it will see an inconsistent database (the sum A+B will be less than it should be). Isolation can be ensured trivially by running transactions serially, that is, one after the other. However, executing multiple transactions concurrently has significant benefits.

o  begin_transaction: This marks the beginning of transaction execution.

o       read or write: These specify read or write operations on the database items that are executed as part of a transaction.

o       end_transaction: This specifies that read and write transaction operations have ended and marks the end limit of transaction execution.

q       commit_transaction: This signals a successful end of the transaction so that any changes (updates) executed by the transaction can be safely committed to the database and will not be undone.

o       undo: Similar to rollback except that it applies to a single operation rather than to a whole transaction.

o       redo: This specifies that certain transaction operations must be redone to ensure that all the operations of a committed transaction have been applied successfully to the database.

No physical updates to db until after a transaction commits.

During the commit, log records are made then changes are made permanent on disk. What if a Transaction fails?

Physical updates to db may happen before a transaction commits.

All changes are written to the permanent log (on disk) before changes are made to the DB. What if a Transaction fails?

Recovery based on Deferred Update

Changes  are  recorded  in  buffers  and  in  log  file

At the commit point, the log is force-written to disk and updates are made in database.

REDO is needed if the transaction fails after the commit but before the changes are made on disk.

Hence the name is NO UNDO/REDO algorithm

Active transactions are cancelled & must be resubmitted

Recovery based on Immediate Update

Updates to disk can happen at any time

But, updates must still first be recorded in the system logs (on disk) before changes are made to database.

if the recovery technique ensures that all updates are made to the database on disk before T commits, we do not need to REDO any committed transactions