There are two types of 3-phase induction motor based on the type of rotor used:

It is possible to speed control by regulating rotor resistance.

Low starting current of the order of 250 to 300% of the full load current.

Hence slip ring induction motors are used where one or more of the above requirements are to be met.

Conversion of electrical power into mechanical power takes place in the rotating part of an electric motor. In A.C. motors, rotor receives electric power by induction in exactly the same way as the secondary of a two-winding transformer receives its power from the primary. Hence such motors are known as a rotating transformer i.e. one in which primary winding is stationary but the secondary is free to rotate.

The stator of an induction motor is in principle, the same as that of a synchronous motor (or) generator.

It is made up of a number of stampings, which are slotted to receive the windings.

The stator carries a 3-phase winding and is fed from a 3-phase supply.

The number of poles are higher, lesser the speed and vice-versa.

The stator winding, when supplied with a 3-phase currents, produce a magnetic flux, which is of constant magnitude but which revolves at synchronous speed (Ns = 120 x f / p).

Motors employing this type of rotor are known as squirrel cage induction motor.

Motors employing this type of rotor are widely known as “phase-wound” motors or wound motor or “slip-ring” motors.

Almost 90 percentage of induction motors are squirrel-cage type, because this type of rotor has the simplest and most rugged construction imaginable and is almost indestructible.

The Rotor consists of cylindrical laminated core with parallel slots for carrying the rotor conductors which, it should be noted clearly, are not wires but consists of heavy bars of copper, aluminium or alloys.

One bar is placed in each slot; rather the bars are inserted from the end when semi-enclosed slots are used.

The rotor bars are brazed or electrically welded or bolted to two heavy and stout short circuiting end-rings, thus giving us, what is called a squirrel cage construction. 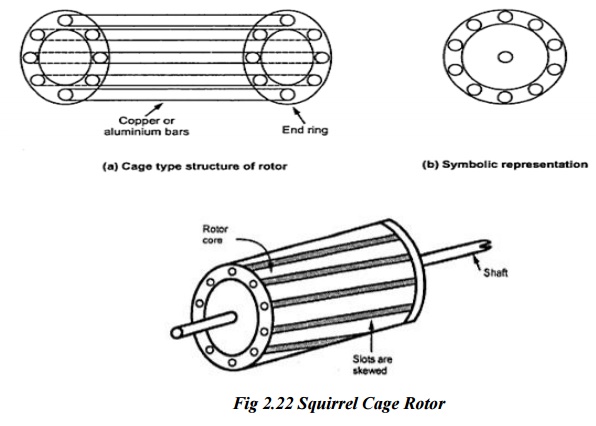 The Rotor bars are permanently short-circuited on themselves; hence it is not possible to add any external Resistance in series with the Rotor circuit for starting purposes.

The rotor slots are not quite parallel to the shaft but are purposely given a slight skew. This is useful in two ways.

This type of rotor is provided with 3-phase, double-layer, distributed winding consisting of coils are used in alternators.

The three phases are shorted internally.

The other three winding terminals are slip-rings mounted on the shaft with brushes resting on them.

These three brushes are further externally connected to a 3-phase star connected Rheostat.

When running under normal conditions, slip-rings are automatically short circuited by means of a metal collar, which is pushed along the shaft and connects all the rings together. 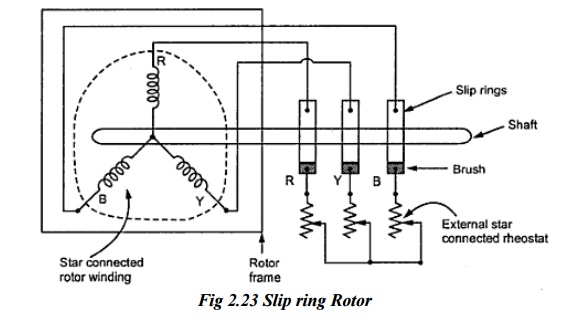 Made of close-grained alloy cast iron.

Are carefully spaced for most effective air circulation and are rigidly braced to withstand centrifugal forces and any short circuit stresses.

The stator rabbets and bore are machined carefully to ensure uniformity of air gap.

Light aluminium fans are used for adequate circulation of cooling air and are securely keyed onto the Rotor shaft.

Slip rings are made of high quality phosphor bronze and are of molded construction.

Induction motor works on the principle of electromagnetic induction.

This rotating field produces an effect of rotating poles around a rotor. Let direction of this magnetic field is clockwise as shown.

Now at this instant rotor is stationary and stator flux R.M.F. is rotating. So its obvious that there exists a relative motion between the R.M.F. and rotor conductors.

Whenever a conductor cuts the flux, emf. gets induced in it. So e.m.f.gets induced in the rotor conductors called rotor induced emf. this is electro – magnetic induction.

Now there are two fluxes, one R.M.F. and another rotor flux.

Both the fluxes interact with each. On left of rotor conductor, two fluxes are in same direction hence added up to get high flux area.

On right side of rotor conductor, two fluxes are in opposite direction hence they cancel each other to produce low flux area.

So rotor conductor experiences a force from left to right, due to interaction of the two fluxes.

So interaction of the two fluxes is very essential for a motoring action. As seen from the figure, the direction of force is same as that of rotating magnetic field. Hence rotor starts rotating in the same direction as that of R.M.F.