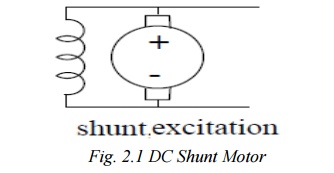 The torque developed by the dc motor

In case of dc shunt motors the field excitation current is constant and supply voltage is kept constant. Therefore flux per pole will be constant. 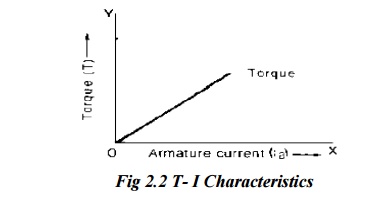 The back emf equation for dc motor is

In dc shunt motor, when supply voltage V is kept constant the shunt field current and hence flux per pole will also be constant. 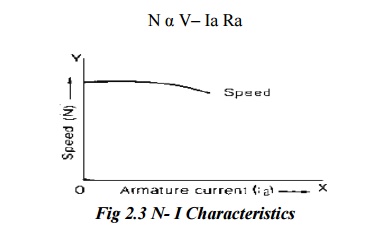        The speeds of the dc shunt motor decreases with increase in armature current due to loading.

       The graph representing variation of speed with armature current is drooping slightly.

       so that the rarely drops by more than about 5 percent from no load to full load. 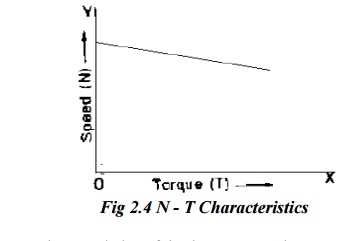 Ø        If these values are plotted, the graph representing the variation of speed with torque developed is obtained.

This curve resembles the speed Vs current characteristics as the torque is directly proportional to the armature current.

There are three types of electric braking namely,

In this method of braking, the armature is disconnected from the supply and is connected across a variable resistance R.

The field winding is left connected across the supply and it is undisturbed.

The braking effect is controlled by varying the series resistance R.

·                    In the first quadrant ,the curve shows that the motor is operating steadily for a given load torque TL at the point A on its natural characteristics.

B.  Plugging (or) Counter current braking

In this method of breaking, connections to the armature terminals are reversed so that motor tends to run in the opposite direction.

       Due to the reversal of armature connections, both V and Eb start acting in the same direction around the circuit.

       In order to limit the armature current to a safe value, it is essential to insert a resistor in the circuit while reversing the armature connections.

       Plugging is executed at a time when the motor is operating at the point E characteristics A for a load torque TL.

       Due to plugging, the operating point shifts to point F on characteristics B as the speed of the motor cannot change instantaneously due to inertia.

       Due to braking torque developed ,the motor decelerates along the characteristics B until the motor stops at GwHEN reversal of rotation is not required, the supply must be switched off when the motor speed becomes very near to zero.

       If the supply is not switched off,the motor will gain speed in the opposite direction along GH on characteristics B .as soon as the direction of the rotation is reversed ,the induced emf in the armature changes its polarity and again acts against the applied voltage so that the drive will rotate in the reverse direction under motoring condition.

       At point H,additional resistance are cut out from the armature circuit and hence the operating point shifts to point I on the natural characteristics C for a load torque,TL

       If plugging is executed again at the point J,then braking and acceleration in the forward direction will corresponded to J –K-L-M-E.

This method is used when the load on the motor has overhauling characteristics as in the lowering of the case of a hoist or downgrade motion of electric train.

§    Regenerative takes place when Eb becomes greater than V.this happens when the overhauling load acts as a prime mover and so drives the machine asa generator.

§    Hence ,the direction of Ia and armature torque is reversed and speed falls until eb becomes less than V.

§    During slowing down of the motor ,power is returned to the line which may be used for supplying another train on an upgrade motion there by essential to have some type of mechanical braking also in order to hold the load in the event of power failure.

§    At zero torque characteristics passes through the point corresponding to ideal no load speed, no as in the case of motoring.

§  From the characteristics curves, it is clear that, higher the armature circuit resistance ,the higher is the speed at which the motor has to run for a given braking torque.