The farm: technical components in a Aquaculture system

The farm: technical components in a system

In a farm the various technical components included in a system can be roughly separated as follows:

To illustrate this, two examples are given: a land-based hatchery and a juvenile farm, and an ongrow-ing sea cage farm.

·  Equipment for transport of fish from the farm

·  Equipment for waste and wastewater treatment

The design of the inlet depends on the water source: is it seawater or freshwater (lakes, rivers), or is it surface water or groundwater? It is also quite common to have several water sources in use on the same farm. Further, it depends whether the water is fed by gravity or whether it has to be pumped, in which case a pumping station is required. Water is normally transferred in pipes, but open channels may also be used.

Usually water is treated before it is sent in to the fish. Equipment for removal of particles prevents excessively high concentrations reaching the fish; additionally large micro-organisms may be removed by the filter. Water may also be disinfected to reduce the burden of micro-organisms, especially that used on eggs and small fry. Aeration may be necessary to increase the concentration of oxygen and to remove possible supersaturation of the gases nitrogen and carbon dioxide. If there is lack of 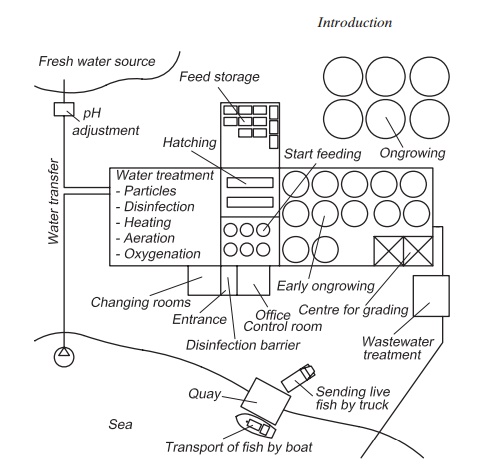 water or the pumping height is large pure oxygen gas may be added to the water. Another possibility if water supply is limited is to reuse the water, however, this will involve much water treatment. For optimal development and growth of the fish heating or cooling of the water may be necessary; in most cases this will involve a heat pump or a cold-storage plant. If the pH in a freshwater source is too low pH adjustment may be a part of the water treatment.

The production units necessary and their size and design will depend on the species being grown. In the hatchery there will either be tanks with upwelling water (fluidized eggs) or units where the eggs lie on the bottom or on a substrate. After hatching the fish are moved to some type of pro-duction tank. Usually there are smaller tanks for weening and larger tanks for further on-growing until sale. Weening start feeding tanks are normally under a roof, while on-growing tanks can also be outside.

Some type of feeding equipment is commonly used, especially for dry feed. Use of automatic feeders will reduce the manual work on the farm. Feeding at intervals throughout the day and night may also be possible; the fish will then always have access to food, which is important at the fry and juvenile stages.

Because of fish growth it is necessary to divide the group to avoid fish densities becoming too high. It is also common to size grade to avoid large size variations in one production unit; for some species this will also reduce the possibilities for cannibalism

When juvenile fish are to be transferred to an on-growing farm, there is a need for transport. Either a truck with water tanks or a boat with a well is normally used. The systems for loading may be an integral part of the farm construction.

Precautions must be taken to avoid pollution from fish farms. These include legal treatment of general waste. Dead fish must be treated and stored satis-factorily, for example, put in acid or frozen for later use. Dead fish containing trace of antibiotics or other medicine must be destroyed by legal means.

Whether wastewater treatment is necessary will depend on conditions where the effluent water is discharged. Normally there will at least be a requirement to remove larger suspended particles.

In land-based fish farms, especially those depen-dent upon pumps, a monitoring system is essential because of the economic consequences if pumping stops and the water supply to the farm is inter-rupted. The oxygen concentration in the water will fall and may result in total fish mortality. Instruments are being increasingly used to control water quality, for instance, to ensure optimal production.

Normally a sea cage farm can be run with rather less equipment than land-based farms, the major reason being that water transfer and water treat-ment (which is not actually possible) are not nec-essary because the water current ensures water supply and exchange. The components necessary are as follows (Fig. 1.2):

Sea cages vary greatly in construction and size; the major difference is the ability to withstand waves, and special cages for offshore farming have been developed. It is also possible to have system cages comprising several cages, or individual cages. The cages may also be fitted with a gangway to the land. Sea cages also include a mooring system. To improve fish growth, a sub-surface lighting system may be used.

It is common to install some type of feeding system in the cages because of the large amounts of feed that are typically involved. Manual feeding may also be used, but this involves hard physical labour for the operators. 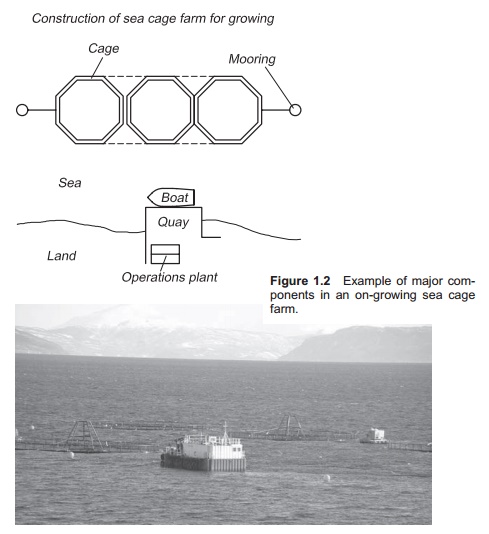 All sea cage farms need a boat; a large variety of boats are used. Major factors for selection are size of the farm, whether it is equipped with a gangway or not, and the distance from the land base to the cages. Faster and larger boats are normally required if the cages are far from land or in weather-exposed water.

Equipment for size grading can be necessary if this is included in the production plan. It may, how-ever, be possible to rent this as a service from subcontractors.

All cages farms will include a base station; this may either be land based, floating on a barge or both. The base station can include storage rooms, mess rooms, changing rooms and toilet, and equipment for treatment of dead fish. The storage room includes rooms and/or space for storage of feed; it may also include rooms for storage of nets and possibly storage of equipment for washing, maintaining and impregnating them. However, this is also a service that is commonly rented from subcontractors.