The Story of Madras Presidency

The Story of Madras Presidency 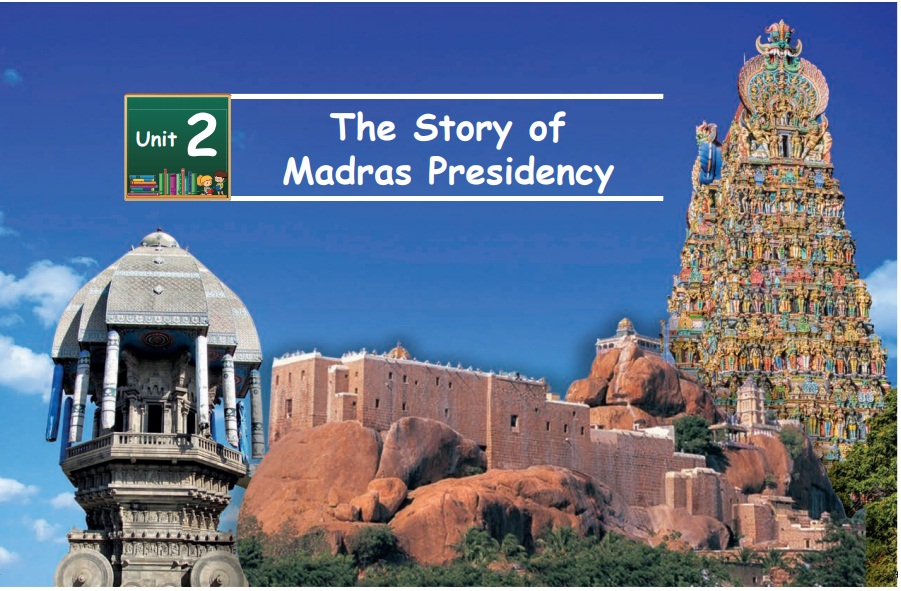 Children will be able to

●describe the history of Madras Presidency

●recognize the districts of Madras Presidency

Madras Presidency was formed in 1801. It was an important province of British India. It was also known as Madras Province and officially known as the Presidency of Fort St. George. It included areas of southern India, such as the states of Tamil Nadu, Kerala, Andhra Pradesh, Karnataka, parts of Odisha and the Union Territory of Lakshadweep. 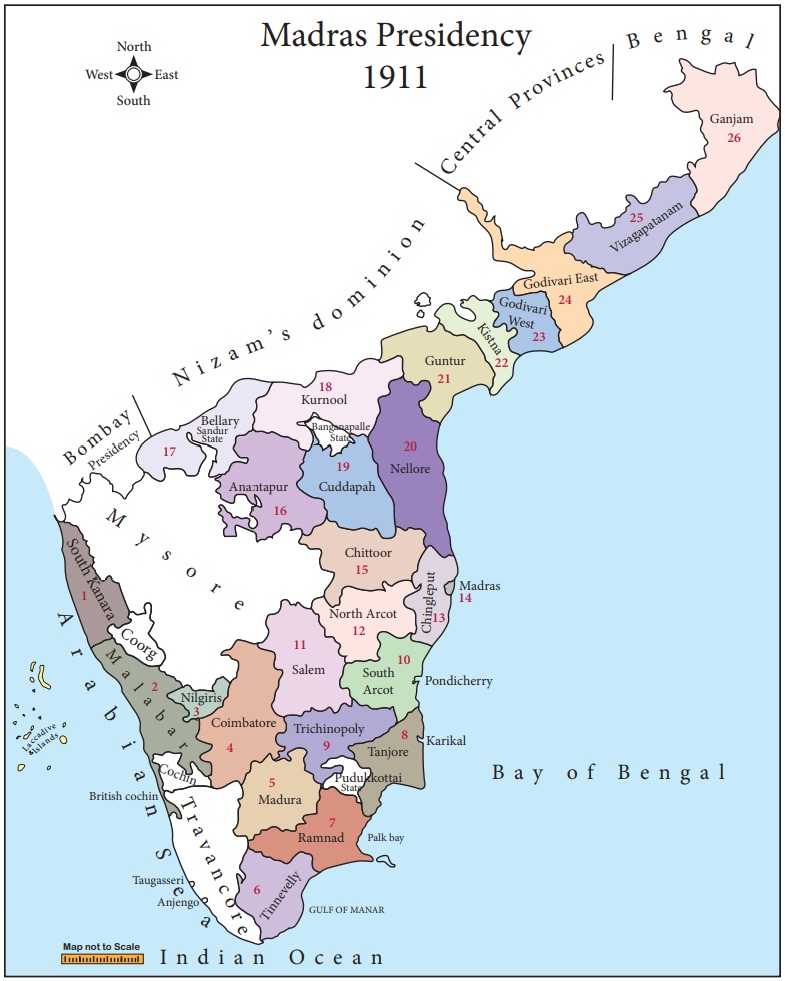 Do You Know? The first British Governor of Madras Presidency was Edward Clive and the last Governor was Archibald Edward Nye 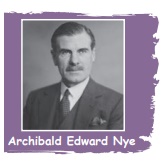 After 147 years of its formation, the Madras Presidency was renamed as Madras State in 1947 as India gained independence.

The modern districts of Chennai,Tiruvallur and Kancheepuram constituted the Madras district. British bought a part of the land fromthe Nayak rulers in 1639. They built Fort St. George and named the area Madrasapattinam. 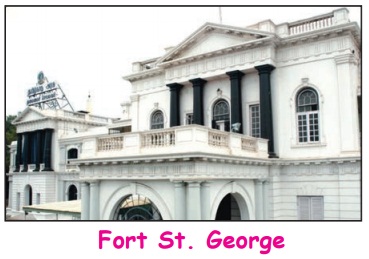 Gudiyam Caves are rock shelters in South India and are known for their prehistoric stone tools and evidence of humans living there near by two lakh years ago.

Mamallapuram was created by the Pallava Dynasty. It has many rock sculptures and is declared by UNESCO as a World Heritage site. 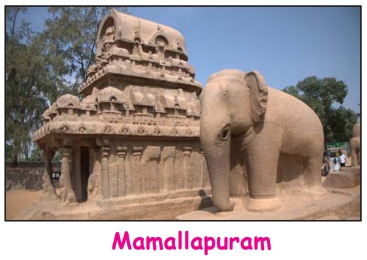 Uthiramerur, an ancient Chola village, is located in Kancheepuram district. The temple inscriptions of Uthiramerur are notable for their historical descriptions of rural self-governance.

The modern districts of Vellore and Tiruvannamalai constituted the North Arcot district.

Vellore Fort is an ancient fort built in 1566 by Chinna Bommi Nayak and Thimma Reddy Nayak.

The Vainu Bappu Observatory is an astronomical observatory. It is located at Kavalur. This is the biggest observatory in Asia. 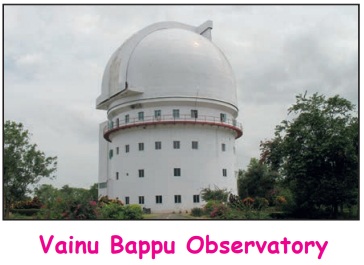 Auroville is an experimental township in Villupuram district near Puducherry. It is a place where people from all over the world come and live together to build a culture of unity. 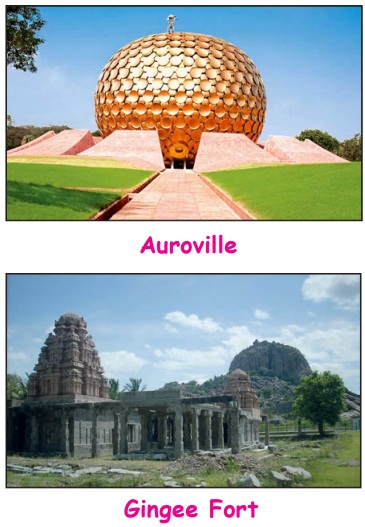 Gingee Fort also called as Senji Fort is one of the beautiful forts in Tamil Nadu. This fortress is built across three hillocks in Villupuram district. The British called this fort as “Troy of the East”.

Porto Novo also called as Parangipettai, is situated in Cuddalore district. The first iron and steel industry of India was located at Porto Novo in 1830.

The modern districts of Salem, Dharmapuri, Krishnagiri and Namakkal constituted the Salem district. The name Salem is derived from the word ”SAILAM”. It means an area surrounded by Mountains. 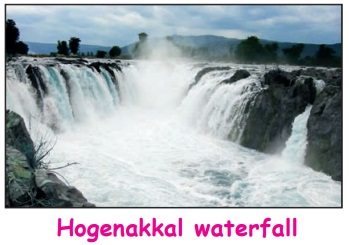 Mettur Dam also called as Stanely Reservoir was constructed across the river Cauvery in 1934. Hogenakkal is one of the waterfalls located in Dharmapuri district. Boat riding on Coracle made of bamboo is an attraction here. Hosur is an industrial city, located in Krishnagiri district.

During British India, the Coimbatore district comprised the modern districts of Coimbatore,Erode, Tiruppur, The Nilgiris and a part of Dindigul. 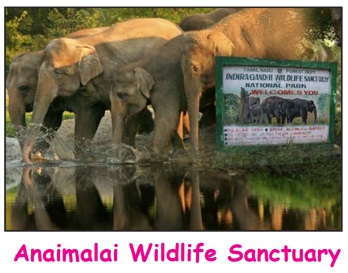 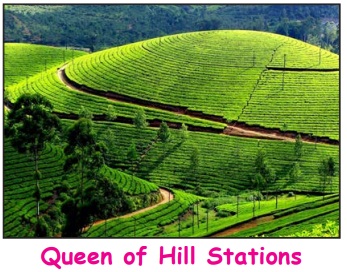 The 'Queen of Hill Stations' Udhagamandalam, better known as Ooty, is the most popular hill station in South India. Ooty was the summer capital of the Madras Presidency. John Sullivan, the district Collector of Coimbatore, is credited for developing the beautiful hill station of Ooty.

Tiruchirappalli Rockfort is a templebuilt on an ancient rock. It is constructed on a rock that is 83 meters tall. There are two Hindu temples inside the fort. 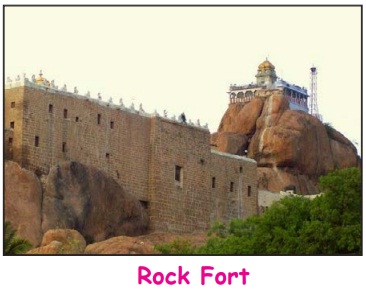 Ranjankudi Fort is located in Perambalur. This fort was constructed by Nawab of the Carnatic.

Gangaikonda Cholapuram is located in Ariyalur district. UNESCO declared this temple as one of the world famous heritage monuments. Ariyalur district is also known for its rich prehistoric fossils.

The modern districts of Thanjavur, Nagapattinam and Tiruvarur formed the Tanjore District.

Thanjavur is popularly known as the Delta area and the “Rice Bowl of Tamil Nadu”. Manora Fort is located in the district of Tanjore. It is known for the eight-storied miniature fortress built by Rajah Serfoji.

Kallanai is an ancient dam built across the River Cauvery in South India. This dam was constructed in 2nd century AD(CE) by the Chola King Karikalan. 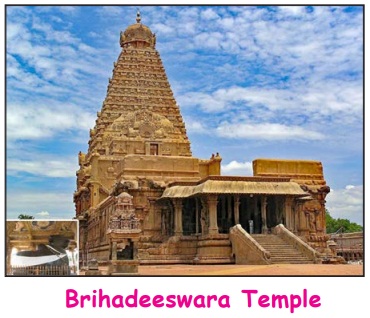 The modern districts of Madurai,Ramanathapuram, Theni and parts of Sivagangai, Virudhunagar and Dindigul formed the Madurai district. 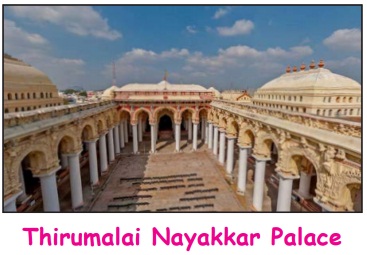 Bodinayakkanur is at the foothills of the Western Ghats. It is popularly known as “Cardamom City”. It is located in the district of Theni.

Keeladi is located in Sivagangai district. According to Tamil Nadu Archaeological Department report Keeladi is an urban settlement of Sangam Age. This cultural finding belongs to the 6th century BC(BCE).

The modern districts of Tirunelveli,Kanniyakumari and Thoothukudi alongwith a part of Virudhunagar formed the Tinnevely district. 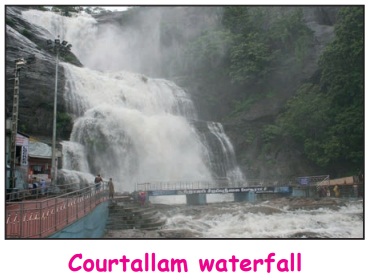 Tamil Nadu possesses many glorious sculptures, paintings, murals adorning walls and pillars. In addition to that giant temple towers (gopurams) were constructed by Tamil Kings. These have preserved the arts and culture of Tamil Nadu. This attracts the tourists all around the world. 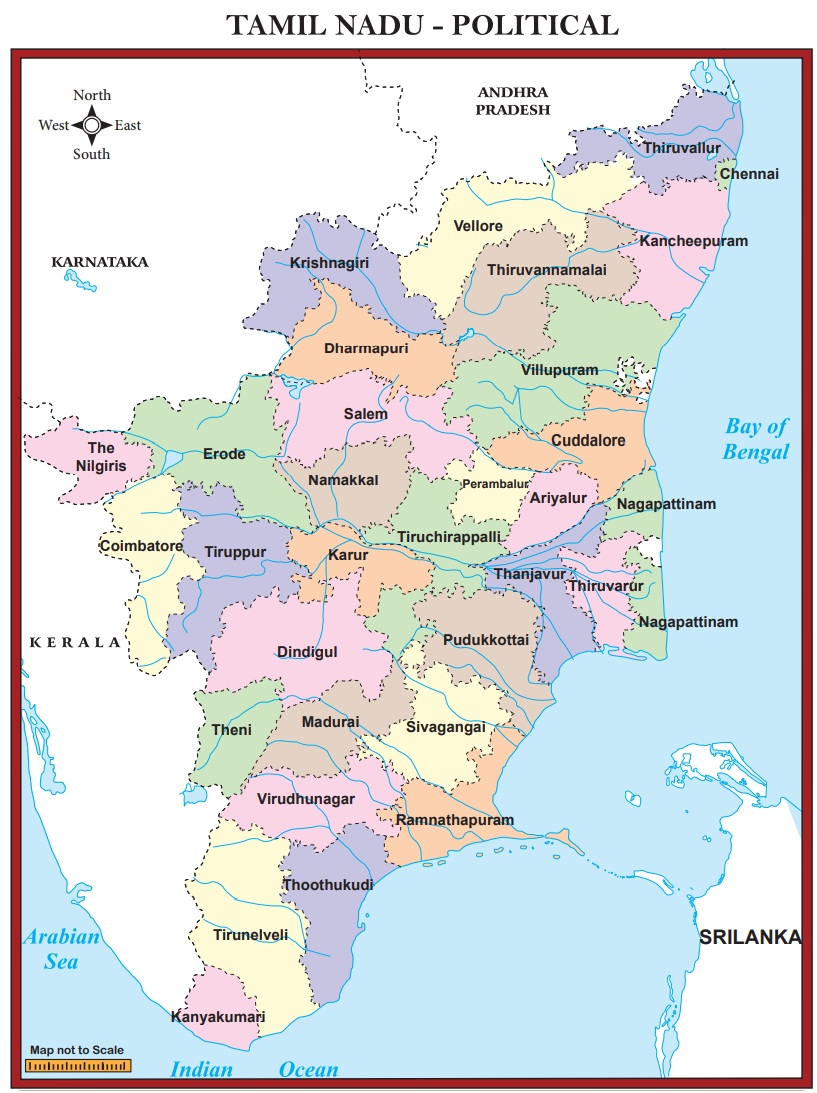 In 2019 government of Tamil Nadu has created five new districts namely Kallakurichi, Tenkasi, Chengalpattu, Tirupathur and Ranipettai. Therefore the boundries of these districts are not defined. 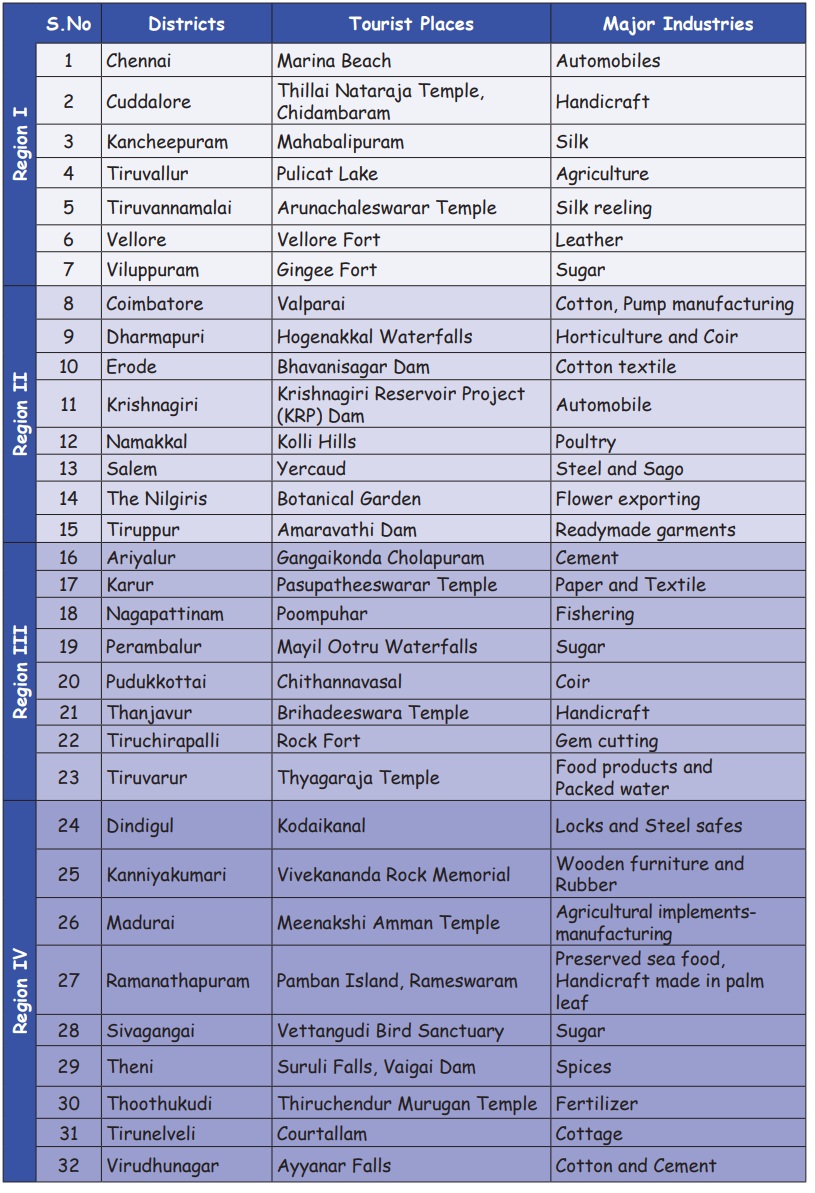 Note to the Teacher:

The above given table is only for teachers' reference to teach about the tourist places and major industries of the district in which the school is located.

Activity: In the state map, colour your native district and mark its neighbouring districts 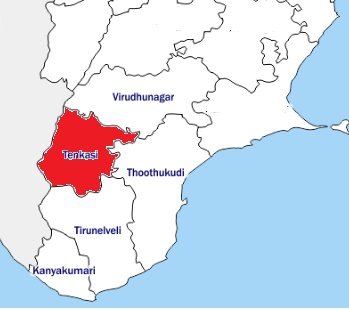 • The districts of Madras, Chingleput, North Arcot, SouthArcot,Salem,Trichinopoly,Tanjore, Ramnad,Tinnevelly,Madura, Coimbatore and the Nilgiris are included in modern state of Tamil Nadu.

•The district of Malabar is included in modern state of Kerala.

•The district of Ganjam is included in modern Odisha.

•The district of Bellary, South Kanara and a part of Anantapur, is included in modern Karnataka.

1. Province - an administrative division or unit of a country.

2. Reorganisation - to arrange something again to improve it.

3. Geologist- a scientist who studies all things related to the Earth.

4. Inscription - anything written on things made of metal or rock.

5. Observatory – a building with a large telescope from which scientists study the universe.

6. Delta - a triangular area where a major river divides into smaller parts.

7. Monument - a structure or building that is built to honour a special person or event.

8. Mural - a painting or other work of art drawn on a wall.

9. Adorn - to decorate with ornaments.