The Round Table Conferences

The Simon Commission had submitted the report to the government.

The Round Table Conferences

The Simon Commission had submitted the report to the government. The Congress, Muslim league and Hindu Mahasabha had boycotted it. The British regime went ahead with the consideration of the report. But in the absence of consultations with Indian leaders it would have been useless. In order to secure some legitimacy and credibility to the report, the government announced that it would convene a Round Table Conference (RTC) in London with leaders of different shades of Indian opinion. But the Congress decided to boycott it, on the issue of granting independence. Everyone knew, more so the government, that it would be an exercise in futility if the Congress did not participate.

Thus negotiations with Congress were started and the Gandhi-Irwin pact was signed on March 5, 1931. It marked the end of civil disobedience in India. The movement had generated worldwide publicity, and Viceroy Irwin was looking for a way to end it. Gandhi was released from custody in January 1931, and the two men began negotiating the terms of the pact. In the end, Gandhi pledged to give up the satyagraha campaign, and Irwin agreed to release tens of thousands of Indians who had been jailed during the movement. 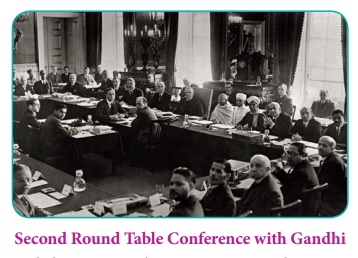 That year Gandhi attended the Second Round Table Conference in London as the sole representative of the Congress. The government agreed to allow people to make salt for their consumption, release political prisoners who had not indulged in violence, and permitted the picketing of liquor and foreign cloth shops. The Karachi Congress ratified the Gandhiâ€“Irwin pact. However the Viceroy refused to commute the death sentence of Bhagat Singh and his comrades.

Gandhi attended the Second RTC but the government was adamant and declined to concede his demands. He returned empty handed and the Congress resolved on renewing the civil disobedience movement. The economic depression had worsened the condition of the people in general and of the peasants in particular. There were peasant protests all over the country. The leftists were in the forefront of the struggles of the workers and peasants. The government was determined to crush the movement. All key leaders including Nehru, Khan Abdul Gafar Khan and finally Gandhi were all arrested. The Congress was banned. Special laws were enacted to crush the agitations. Over a lakh of protesters were arrested and literature relating to nationalism was also declared illegal and confiscated. It was a reign of terror that was unleashed on the unarmed masses participating in the movement.

The movement started waning and it was officially suspended in May 1933 and withdrawn in May 1934.