All the insects in the story lived near pond.

Dragonfly is too proud of itself.

2. Match the words to the pictures.

a. What colour is the dragonfly?

The dragonfly is blue.

b. What is the ant carrying?

The ant is carrying food.

c. What colour is the bumblebee?

The bumblebee has stripes of yellow and black.

d. Why did the chameleon eat the dragonfly?

The chameleon eats the dragonfly as it was hungry.

What comes next? Tick (✔) the correct picture.

* Make flashcards with pictures of insects.

* Divide the class into two groups.

* Call a child from one group and ask him/her to pick a card.

* The child with the card will enact the action of the insect. (e.g. Flying for butterfly.)

* The group should be able to name the insect and the action. (e.g. Butterfly flies.)

* Repeat the activity with the other group.

* The group with the most correct answers wins.

Fill in the blanks with the actions of the insects. 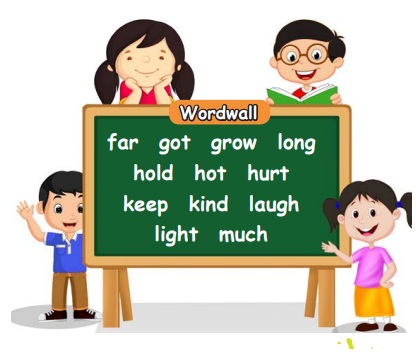 * Display the words on the word wall.

* Make 4 sets of word chits and put them in a box.

* Each child gets a turn to pick a chit and read the word.

* If they read correctly, they get to keep the chit.

* If they are not able to read, they give the chit back.

* When there are no more chits with the teacher, the student with the most chits wins.

* Practise till all the students are able to read the words.

Listen to the sound and repeat.

The car is fast.

We have fun in the park.

The star is far.

The dogs bark at me.

The shark eats the fish. 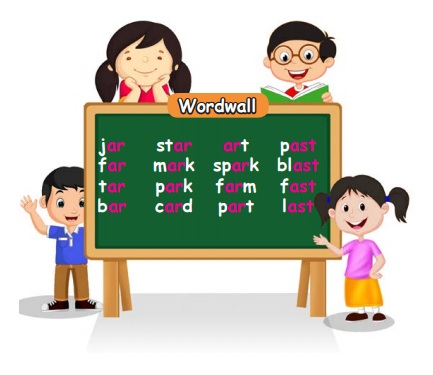 * Make a set of flashcards.

* Invite a child to pick a flashcard.

* Ask the child to show the word to the class and read the word.

* If the child reads correctly, they get to keep the card.

* Ask all children to repeat the word.

* The child with most card wins.

* Practise with all the children. 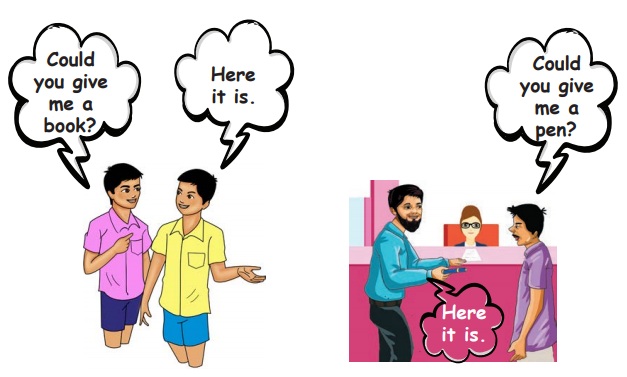 Could you give me a book? Here it is.

Could you give me a pen? Here it is.

* Divide the class into two groups A and B.

* Each child is given an object like a pen, pencil, ID card, book etc.

* Make a child from group A ask, “Could you give me a book?”

* The child from group B with the book should say “Here it is.”

* Practise with other objects like pen, pencil, ID card.

* Reverse the roles of the groups.

* Practise with all the children.

Arrange the words and write it. Then, say it to your friend.

me could the toys give you?

Could you give me the toys?

bag could you me a give?

Could you give me a bag?

Look at the caterpillar in the following pictures.

The caterpillar is in the shoe.

The caterpillar is on the shoe.

The caterpillar is under the shoe.

The caterpillar is near the shoe.

The words in, on, under and near help us know where the caterpillar is.

1. The cockroach is near the shoes.

3. The ant is under the chair.

4. The butterfly is on the ball.

The fish is in the bowl.

The ladybug is on the leaf.

Read the following sentences and draw the insects. 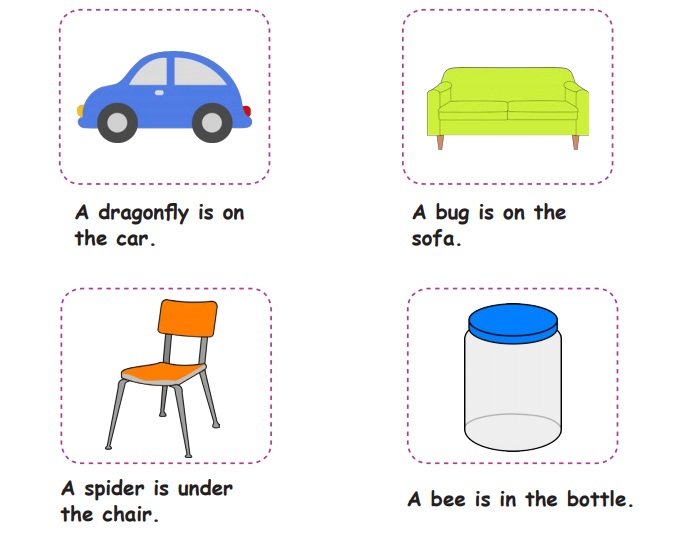 A dragonfly is on the car.

A bug is on the sofa.

A spider is under the chair.

A bee is in the bottle.

Circle the correct picture for the given word.