There is one special class, Object, defined by Java. All other classes are subclasses of Object.

Object defines the following methods, which means that they are available in every object. 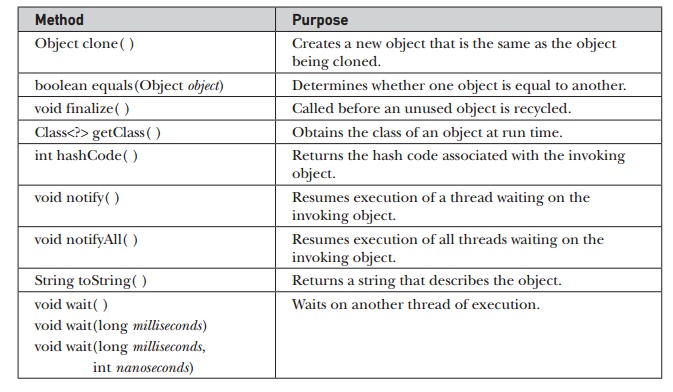 The methods getClass( ), notify( ), notifyAll( ), and wait( ) are declared as final. You may override the others. These methods are described elsewhere in this book. However, notice two methods now: equals( ) and toString( ). The equals( ) method compares two objects. It returns true if the objects are equal, and false otherwise. The precise definition of equality can vary, depending on the type of objects being compared. The toString( ) method returns a string that contains a description of the object on which it is called. Also, this method is automatically called when an object is output using println( ). Many classes override this method. Doing so allows them to tailor a description specifically for the types of objects that they create.

One last point: Notice the unusual syntax in the return type for getClass( ). This relates to Java’s generics feature, which is described in Chapter 14.