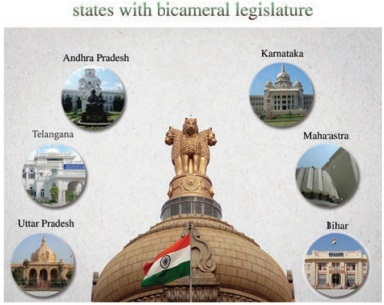 * One third of its members are elected by the local government bodies like the District Panchayat and Municipalities.

* Another one third is elected by the members of the Legislative Assembly.

* One twelfth is elected by the graduates of the constituency and another one twelfth by the teachers of secondary schools, colleges and universities.

At present, only six states in India have Legislative Council in their legislature. They are Bihar, Uttar Pradesh, Maharashtra, Karnataka, Andhra Pradesh and Telangana.

* One sixth of the members of the Legislative Council are nominated by the Governor of the State.

Election to the Assembly

The States Council of Ministers

The leader of the majority party in the election is chosen as Chief Minister. In Tamil Nadu there are 234 legislative constituencies. The party with more than 118 elected candidates (MLA) are invited by the governor to form the Government. The Chief Minister (who also should be an MLA) chooses his ministers from the MLAs of his party. Ministers for various departments headed by the Chief Minister is called the State Government. So it is said that the party which got majority seats in the election forms the government.

The working of the State Government

After being elected to the legislative assembly the MLAs are expected to regularly participate in its sittings. The legislative assembly meets 2 or 3 times in a year. The main duty of the Legislative Assembly is to make laws for the state. It can make law on the subjects mentioned in the state list and the concurrent list. However, during state emergency, it cannot exercise its legislative power.

The assembly has control over the State council of Ministers. The State council of ministers are responsible or answerable to the Assembly for its activities. The Assembly may pass a no confidence motion against the council of Ministers and bring its downfall if it is not satisfied with the performance of the council of Ministers. The legislative Assembly has control over the finances of the state. A money bill can be introduced only in the Assembly. The government cannot impose, increase, lower or withdraw any tax without the approval of the Assembly. The elected members of the Legislative Assembly can take part in the election of the president of India and all members can take part in the election of the members of the Rajya Sabha from the state. The Assembly also takes part in the amendment of the Constitution on certain matters. So the government has three basic functions: making laws, executing laws and ensuring justice.

How laws are made in State Government?

Several kinds of rules and laws have been made for all people of our country. For instance, there is a law that you cannot keep a gun without having a licence for it. Or that woman cannot marry before the age of 18 years old and men cannot marry before the age of 21 years. These rules and laws have not been made just like that. People elected their government who thought carefully before making such laws. A lot of such laws are made by the state and central government.

In the legislative assembly meetings, MLAs discuss a number of topics like public works, education, law and order and various problems faced by the state. The MLA s can ask questions to know the activities of ministries, which the concern ministers have to answer. The legislative assembly makes laws on certain issues. The process of law making as follows: 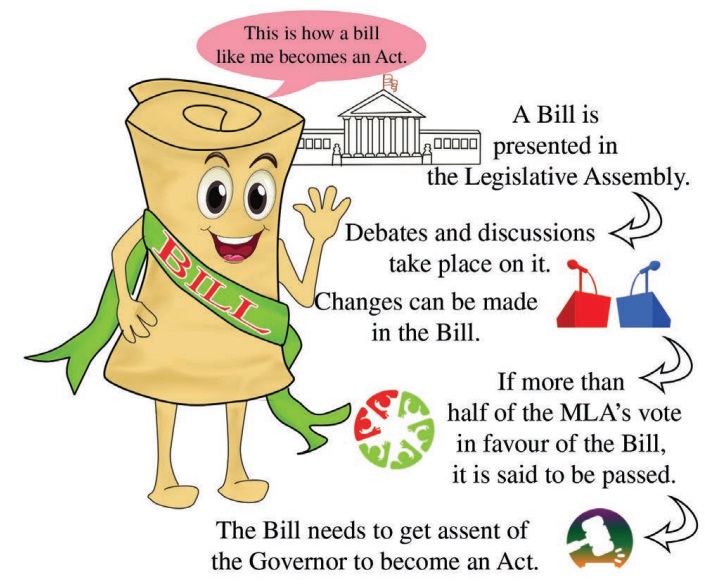