The Last Stone Carver: Section I 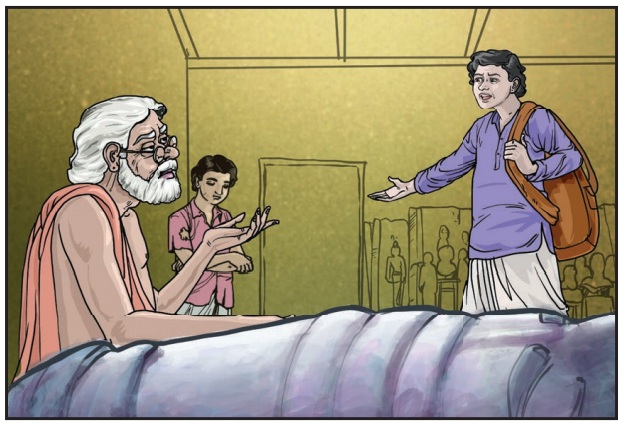 The young man flung the hammer and the chisel to the ground and cried, “I’m leaving Father. I’m leaving you and this work. Look what it’s brought us!”

He spread out his arms and glanced indifferently at the small, congested work room. The white washed walls were stained by many monsoons.The window, bare of curtains, opened into a tiny backyard.

“After all these years of work, this is all we have – nothing, nothing. This kind of work just doesn’t pay!”

The old man stared at his son in surprise. Although his voice trembled, it didn’t lose its usual gentleness. “It’s not only the money that matters, son. It’s the service, our service to God.”

“Father,” the young man grunted impatiently, “times have changed. The stone carver’s work has changed too. You can’t live on sculptures for temples only. You have to mass produce, mass produce like all the others in Agra. Come on, Father! Wake up.”

The lines around the man’s mouth tightened. “No, my son. This is the work I learnt from my father. And he learned from his father. We have kept up this tradition for hundreds of years... and I hoped you would continue our work.” 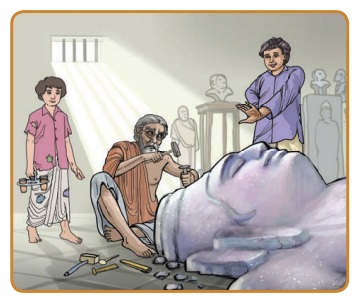 “No, Father” the young man replied with determination. "I’m tired of working for a pittance for the committee of the temple in Srinagar. I’m leaving, Father.”

The young man moved angrily out of the room, leaving his old father crouching in front of a half-finished marble statue. He dropped his hands into his laps, and closed his eyes. He began to pray and didn’t even hear the hesitant ‘goodbye’. His son called out from the door.

“Masterjee!” called Salim, the servant boy, entering the workshop barefooted. He held out a glass of steaming tea in his hand. “Masterjee?” he asked once more, his voice filled with concern.

The old man looked up. His face was ashen. He looked tired. He called the boy to come closer and motioned him to sit down.

“Salim,” he said gently, “soon I will be the last stone carver here. All the others would have gone to Agra. There they are turning out cheap candlestands, paperweights and ashtrays by the dozen. They are making money, but they betray our skill, our age-old tradition. Now Gopal has also gone. I’ll have to finish this sculpture alone. And with the help of God, I’ll do it, Salim. "I know you will, Masterjee,” the boy answered. “You’ll make many more."

The old man looked at the orphan boy who had come to work for him five years ago. Drenched to the skin, dressed in tatters, he had begged for shelter during monsoon storm.  And had stayed on to work for the old master craftsman. He had grown tall and strong. The old man knew that Salim too would leave him one day.

He shook his head.”My strength is waning. I can’t work with the chisel like I used to. Carving takes too long, much too long. Then he straightened up and said with fresh determination, “I’ll have to finish this work. And surely I will.”

“Yes, you will,” the boy repeated offering his master the glass of tea. “Drink please.

It will do you good.” Then he added, “I have to go to the market for an hour or two. But I’ll be back in time to prepare dinner.” The old man nodded. The old man sighed and picked up the chisel and hammer. The cool metal of the tools filled him with happiness and confidence. He loved his work, and didn’t want to change it for any other in the world.

grunted - made a low sound

determination - firmness to do something

Which of the two sentences given below convey the following meaning?

1. stained  by - mark made on clothes or materials

a. The walls were made dirty by rains. ✓

b. The Monsoon removed the dirt from the walls.

I am tired of working for a pittance.

a. He didn’t want to work because he was tired.

b. He didn’t want to work as he gets low income for his work. ✓

His face was ashen.

b. He looked bright and cheerful.

a. He is thin and skinny.

1. How did the old man earn his living?

The old man earned his living by carving stones for the temple.

He used a hammer and a chisel for his work.

The workroom was small and congested. The walls were stained by many monsoons. The window was without curtains.

His son said that he was leaving for Agra because that kind of work did not pay them well.

5. Why did the old man continue to do the work?

The old man felt that money didn't matter. He felt that it was a service to God.

6. Who was Salim? What did he bring the old man?

Salim was the servant boy. He brought the old man a glass of steaming tea.

The old man's face was ashen. He looked tired.

8. Why do the stone carvers go to Agra?

9. What do you know about Salim?

10. How did the old man feel when he picked up the hammer and chisel?

When the old man picked up the cool tools he was filled with happiness and confidence.

1. Describe the events leading to the old man’s son leaving him.

The old man was a master craftsman. He carved stones to make statues for the temple. Gopal was his son. One day his son came to him. He said that he was tired of working for a pittance. He added that he could earn more if he went to Agra. So he took leave of his father and quit the place. On hearing this his father was broken-hearted. He was sad that there was no one after him to keep up the age-old tradition.

2. What do you know about Salim and his master?

Salim was an orphan boy. He came to the old man five years ago. When he came there he was in tatters. He was drenched to the skin. He asked for shelter. He stayed to work with the old man. Soon he had grown tall and strong. Salim was helpful to the old man. He took care of him prepared food for him.