Home | The Fun They Had - Supplementary

Chapter: 9th EM English : Supplementary : The Fun They Had

The Fun They Had - Supplementary

English : Supplementary : The Fun They Had

The Fun They Had

Now, share your views about the changes that you and your classmates expect in your school and classroom in about 20-50 years.

Read the story to find out how a student like Margie studies in the year 2157.

1. Margie even wrote about it that night in her diary. On the page headed 17 May 2157, she wrote, “Today Tommy found a real book!”

2. It was a very old book. Margie’s grandfather once said that when he was a little boy his grandfather told him that there was a time when all stories were printed on paper.

3. They turned the pages, which were yellow and crinkly, and it was awfully funny to read words that stood still instead of moving the way they were supposed to—on a screen, you know. And then when turned back to the page before, it had the same words on it that it had when they read it the first time.

4. “Gee!,” said Tommy, “What a waste. When you’re through with the book, you just throw it away, I guess. Our television screen must have had a million books on it and it’s good for plenty more. I wouldn’t throw it away.”

5. “Same with mine,” said Margie. She was eleven and hadn’t seen as many telebooks as Tommy had. He was thirteen.

7. “In my house”. He pointed without looking, because he was busy reading. “In the attic.”

10. Margie was scornful. “School ? What’s there to write about school? I hate school.”

11. Margie always hated school, but now she hated it more than ever. The mechanical teacher had been giving her test after test in geography and she had been doing worse and worse until her mother had shaken her head sorrowfully and sent for the country inspector. 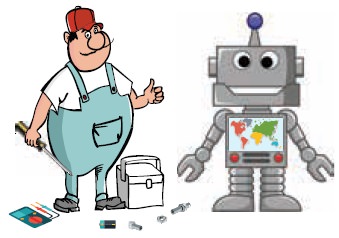 12. He was a round little man with a red face and a whole box of tools with dials and wires. He smiled at Margie and gave her an apple, then took the teacher apart. Margie had hoped he wouldn’t know how to put it together again, but he knew how all right, and, after an hour or so, there it was again, large and black and ugly, with a big screen on which all the lessons were shown and the questions were asked. That wasn’t so bad. The part Margie hated most was the slot where she had to put homework and test papers. She always had to write them out in a punch code they made her learn when she was six years old, and the mechanical teacher calculated the marks in no time.

13. The inspector had smiled after he was finished and patted Margie’s head. He said to her mother, “It’s not the little girl’s fault, Mrs. Jones. I think the geography sector was geared a little too quickly. Those things happen sometimes. I’ve slowed it up to an average ten year level. Actually, the overall pattern of her progress is quite satisfactory.” And he patted Margie’s head again.

14. Margie was disappointed. She had been hoping they would take the teacher away altogether. They had once taken Tommy’s teacher away for nearly a month because the history sector had blanked out completely.

15. So she said to Tommy, “Why would anyone write about school?”

16. Tommy looked at her with very superior eyes. “Because it’s not our kind of school, stupid. This is the old kind of school that they had hundreds and hundreds of years ago.” He added loftily pronouncing the word carefully, “Centuries ago.”

17. Margie was hurt. “Well I don’t know what kind of school they had all that time ago.” She read the book over his shoulder for a while, then said, “Anyway, they had a teacher.”

18. “Sure they had a teacher, but it was not a regular teacher. It was a human.”

20. “Well, she told boys and girls things and gave them homework and asked them questions.”

23. Margie wasn’t prepared to dispute that. She said, “I wouldn’t want a stranger in my house to teach me.”

24. Tommy screamed with laughter. “You don’t know much, Margie. The teachers didn’t live in the house. They had a special building and all the kids went there.”

27. “But my mother says a teacher has to be adjusted to fit the mind of each boy and girl it teaches and that each kid has to be taught differently.”

29. “I didn’t say I didn’t like it,” Margie said quickly. She wanted to read about those funny schools.

30. They weren’t even half finished when Margie’s mother called, “Margie! School!”

33. Margie said to Tommy, “Can I read the book some more with you after school?”

34. “Maybe,”  he  said  nonchalantly.  He walked away whistling, the dusty old book tucked beneath his arm.

35. Margie went into the schoolroom. It was right next to her bedroom, and the mechanical teacher was on and waiting for her. It was always on at the same time every day except Saturday and Sunday, because her mother said little girls learned better if they learned at regular hours. 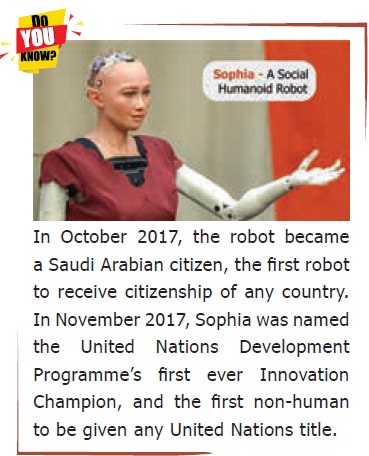 36. The screen was lit up, and it said: “Today’s arithmetic lesson is on the addition of proper fractions. Please insert yesterday’s homework in the proper slot.”

37. Margie did so with a sigh. She was thinking about the old schools they had when her grandfather’s grandfather was a little boy. All the kids from the whole neighborhood came, laughing and shouting in the schoolyard, sitting together in the schoolroom, going home together at the end of the day. They learned the same things, so they could help one another with the home work and talk about it. 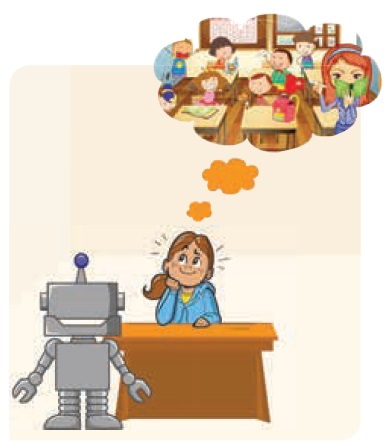 38. And the teachers were people…

39. The mechanical teacher was fl ashing on the screen: “When we add fractions ½ and ¼… 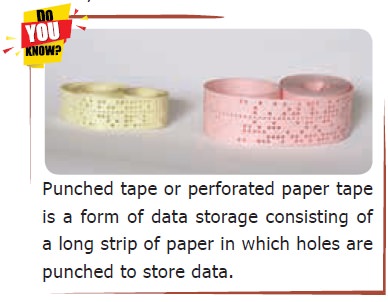 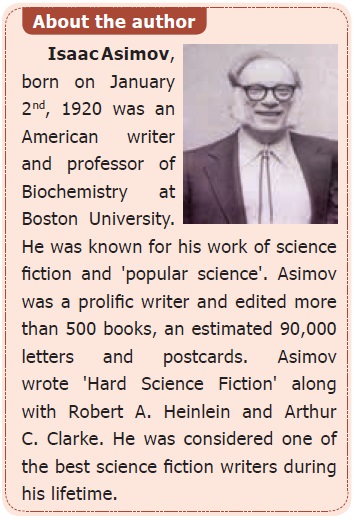