TCP is a transport layer protocol used by applications that require guaranteed delivery.

•       TCP is a transport layer protocol used by applications that require guaranteed delivery.

•       It is a sliding window protocol that provides handling for both timeouts and retransmissions.

•       TCP establishes a full duplex virtual connection between two endpoints. Each endpoint is defined by an IP address and a TCP port number.

•       The operation of TCP is implemented as a finite state machine. The byte stream is transferred in segments. The window size determines the number of bytes of data that can be sent before an acknowledgement from the receiver is necessary.

•       Whereas IP handles lower-level transmissions from computer to computer as a message makes its way across the Internet, TCP operates at a higher level, concerned only with the two end systems, for example a Web browser and a Web server.

•       In particular, TCP provides reliable, ordered delivery of a stream of bytes from a program on one computer to another program on another computer.

•       Besides the Web, other common applications of TCP include e-mail and file transfer. Among other management tasks, TCP controls segment size, flow control, and data exchange rate. 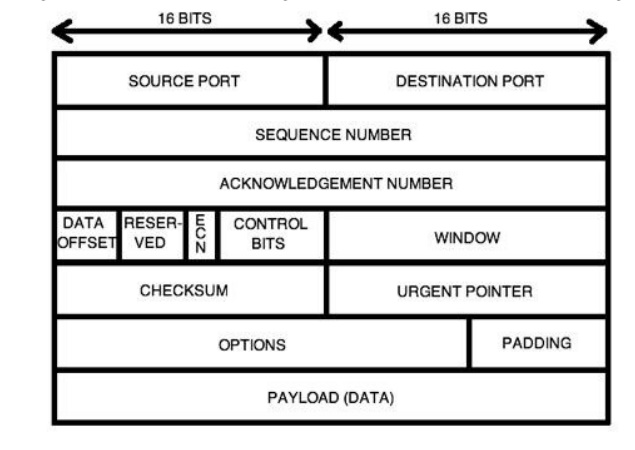 •       If the SYN flag is clear, then this is the accumulated sequence number of the first data byte of this packet for the current session.

•       Acknowledgment number (32 bits) – if the ACK flag is set then the value of this field is the next sequence number that the receiver is expecting. This acknowledges receipt of all prior bytes (if any). The first ACK sent by each end acknowledges the other end's initial sequence number itself, but no data.

Data offset (4 bits) – specifies the size of the TCP header in 32-bit words. The minimum size header is 5 words and the maximum is 15 words thus giving the minimum size of 20 bytes and maximum of 60 bytes, allowing for up to 40 bytes of options in the header. This field gets its name from the fact that it is also the offset from the start of the TCP segment to the actual data.

•       If the SYN flag is clear, that a packet with Congestion Experienced flag in IP header set is received during normal transmission

•       ACK (1 bit) – indicates that the Acknowledgment field is significant. All packets after the initial SYN packet sent by the client should have this flag set.

•       SYN (1 bit) – Synchronize sequence numbers. Only the first packet sent from each end should have this flag set. Some other flags change meaning based on this flag, and some are only valid for when it is set, and others when it is clear.

•       Window (16 bits) – the size of the receive window, which specifies the number of bytes (beyond the sequence number in the acknowledgment field) that the receiver is currently willing to receive

•       Urgent pointer (16 bits) – if the URG flag is set, then this 16-bit field is an offset from the sequence number indicating the last urgent data byte

•       Options (Variable 0-320 bits, divisible by 32) – The length of this field is determined by the data offset field. Options 0 and 1 are a single byte (8 bits) in length. The remaining options indicate the total length of the option (expressed in bytes) in the second byte

•       The User Datagram Protocol (UDP) is one of the core members of the Internet Protocol Suite, the set of network protocols used for the Internet.

•       With UDP, computer applications can send messages, in this case referred to as datagram, to other hosts on an Internet Protocol (IP) network without requiring prior communications to set up special transmission channels or data paths.

•       UDP is sometimes called the Universal Datagram Protocol. The protocol was designed by David P.

•       UDP assumes that error checking and correction is either not necessary or performed in the application, avoiding the overhead of such processing at the network interface level.

•       Time-sensitive applications often use UDP because dropping packets is preferable to waiting for delayed packets, which may not be an option in a real-time system.

A field that specifies the length in bytes of the entire datagram: header and data. The minimum length is 8 bytes since that's the length of the header. The field size sets a theoretical limit of 65,535 bytes (8 byte header + 65,527 bytes of data) for a UDP datagram. The practical limit for the data length which is imposed by the underlying IPv4 protocol is 65,507 bytes (65,535 − 8 byte UDP header − 20 byte IP header).

The checksum field is used for error-checking of the header and data. If the checksum is omitted in IPv4, the field uses the value all-zeros