Home | | Obstetrics and Gynecology | Symptoms of Premenstrual Syndrome and Premenstrual Dysphoric Disorder
Posted On :  16.10.2017 03:09 am

Over 200 symptoms have been attributed to PMS. Each patient presents with her own constellation of symptoms, thus making specific symptoms less important than the cyclic occurrence of the symptoms.

Over 200 symptoms have been attributed to PMS. Each patient presents with her own constellation of symptoms, thus making specific symptoms less important than the cyclic occurrence of the symptoms. Somatic symptoms that are most common include abdominal bloating and fatigue. Other symptoms include breast swelling and pain (masto-dynia), headache, acne, digestive upset, dizziness, sensitiv-ity to external stimuli, and hot flushes. The most common behavioral symptom is emotional lability. Other behavioral symptoms include irritability, depressed mood, anxiety, hostility, lachrymosity, increased appetite, difficulty con-centrating, and changes in libido. Box 39.1 presents the diagnostic criteria for PMDD as described in the DSM-IV. Box 39.2 lists the diagnostic criteria for PMS. The criteria for the diagnosis of PMDD are more rigorous than those of PMS and emphasize the existence of mood-related symp-toms. PMS can be diagnosed on the basis of either mood or physical symptoms. 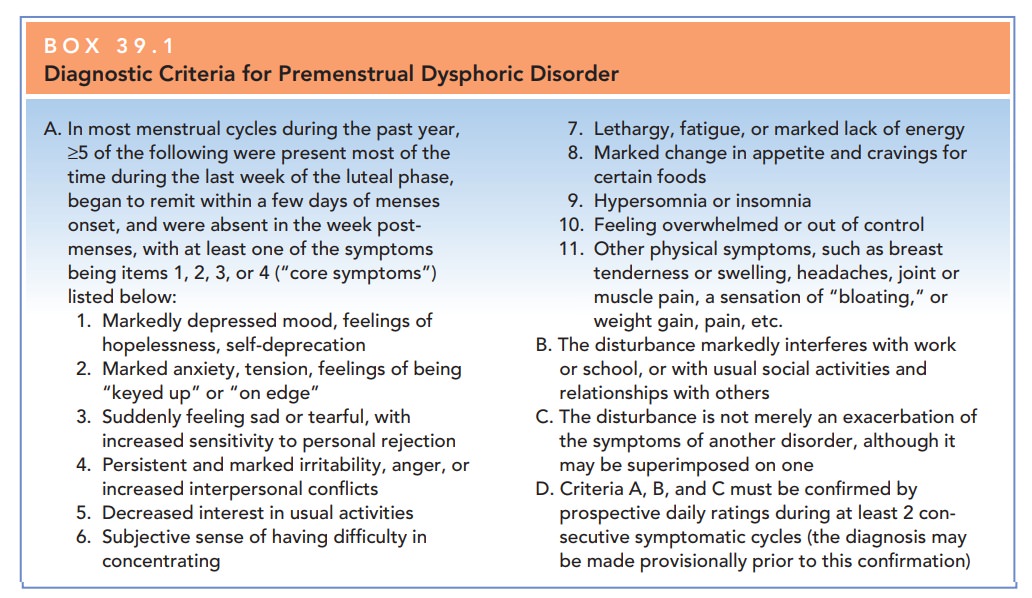 Many theories have been proposed to explain PMS, includ-ing altered levels of estrogen, progesterone, endorphins, cat-echolamines, vitamins, and minerals, but none provides a single, unified explanation that accounts for all the variations that are seen.

No compelling variations in any of these substances have been found in women who have symptoms, compared to women without symptoms, with the exception of some pre-liminary studies on serotonin. Although it has been pro-posed that a low luteal-phase progesterone level is the cause of what is now recognized as PMS or PMDD, measurement of serum progesterone values and clinical results of proges-terone supplementation have not supported this theory. 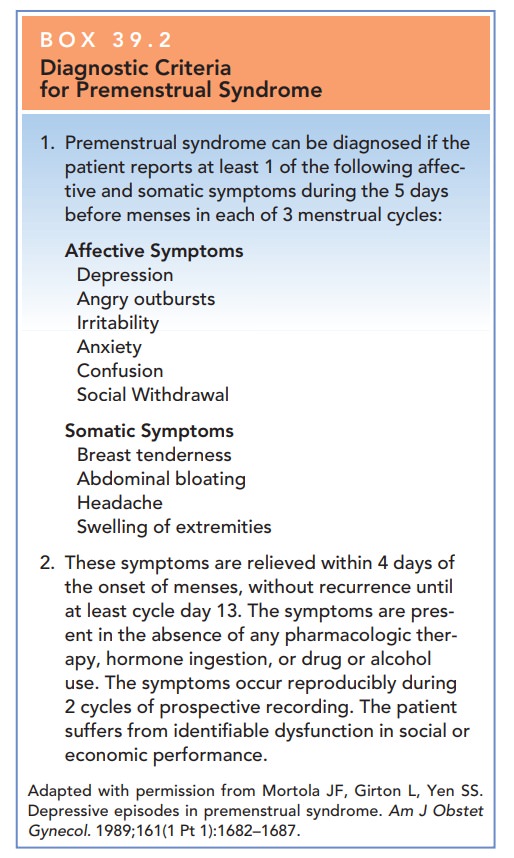 Virtually any condition that results in mood or physical changes in any cyclic fashion may be included in the dif-ferential diagnosis of PMS (Box 39.3). Studies have shown that a patient’s recall of symptoms and timing of symp-toms is often biased and thus inaccurate, because of wide-spread societal expectations and cultural prominence of “the premenstrual syndrome.” The majority of patients whopresent for treatment of PMS do not actually demonstrate symp-toms restricted to the luteal phase. 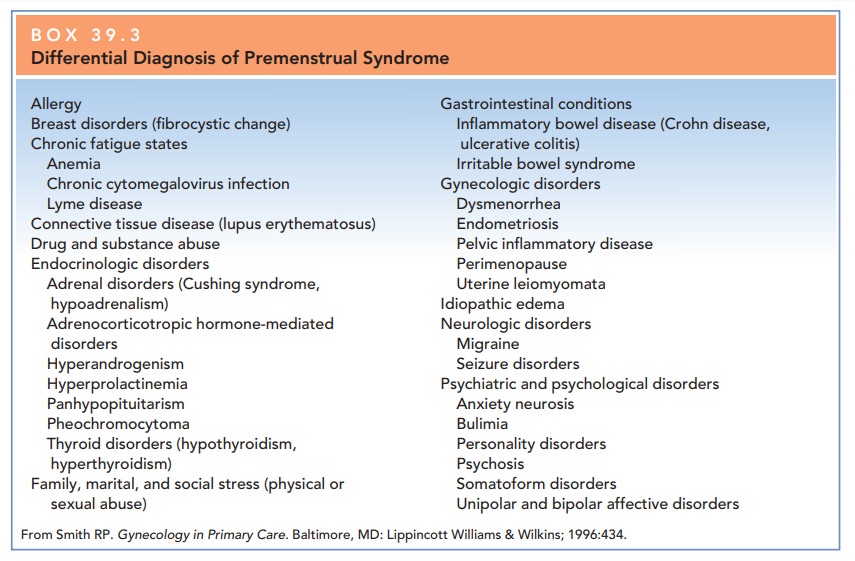 The diagnosis of PMS and PMDD can be very subjective and thus should be rigorously established using the criteria outlined.

The physician must remain open-minded at the outset, and not prematurely exclude the primary problem. In the differential diagnosis, the physician should consider med-ical problems, psychiatric disorders, and premenstrual exacerbations of medical and/or psychiatric conditions: Perimenopause can also present with similar symptoms.

Because the etiology of PMS and PMDD is not clear, no definitive historical, physical examination, or labora-tory markers are available to aid in diagnosis. At present,the diagnosis of PMS and PMDD is based on documentation of the relationship of the patient’s symptoms to the luteal phase.

Premenstrual syndrome can be diagnosed if the patient reports at least 1 of the following affec-tive and somatic symptoms during the 5 days before menses in each of 3 menstrual cycles:

These symptoms are relieved within 4 days of the onset of menses, without recurrence until at least cycle day 13. The symptoms are pres-ent in the absence of any pharmacologic ther-apy, hormone ingestion, or drug or alcohol use. The symptoms occur reproducibly during 2 cycles of prospective recording. The patient suffers from identifiable dysfunction in social or economic performance.

Prospective documentation of symptoms can be accom plished using a menstrual diary in two or more consec-utive menstrual cycles. The patient is asked to monitor her symptoms and the pattern of menstrual bleeding for 2 or more cycles. For PMS, she needs only to have one of the listed symptoms, but must have a symptom-free period. For PMDD, the patient is asked to also monitor the severity of symptoms. She must demonstrate 5 of the listed 11 symptoms (see Box 39.2), one of which must be a core symptom. She also must demonstrate a symptom-free follicular phase. If her symptoms persist during the follicular phase but are less severe, one must consider luteal phase worsening of a different disorder (sometimes called entrainment).

Many physical and psychiatric disorders are known to worsen in the luteal phase, including irritable bowel syndrome and major depressive disorder.

It is important to distinguish these disorders from PMDD. A variety of diagnostic tools exist to assist patients with keeping their menstrual diaries. Figure 39.1 shows one such tool called “Daily Record of Severity of Problems.” 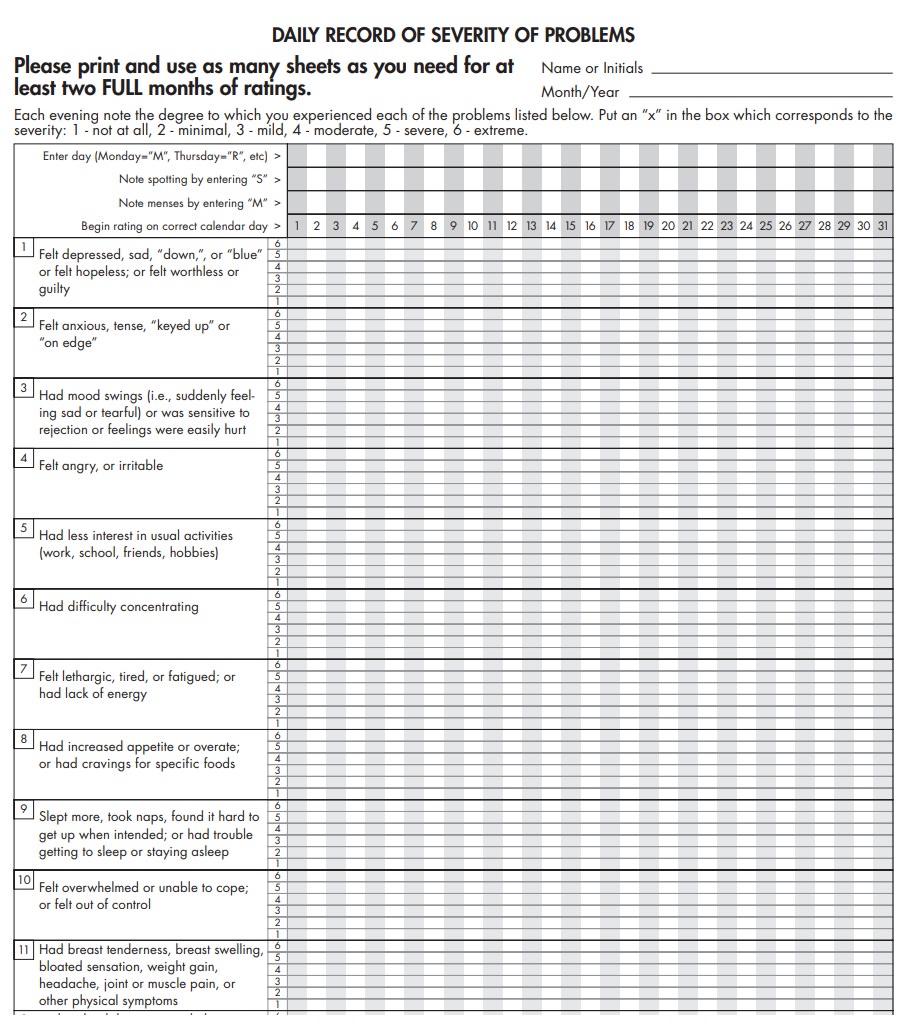 Patients with PMS should be evaluated to rule out specific pathology, although it is also important to understand that no specific physical findings are diagnostic of PMS.

It is reasonable to perform a complete blood count and evaluate the thyroid-stimulating hormone (TSH) level, because thyroid disease and anemia are quite common in young menstruating women; however, there is no evidence that anemia or thyroid disease occur more frequently in patients who present for treatment of PMS or PMDD.