* Motion and rest are relative.

* Application of forces is implemented by a push or pull. Forces can be applied by animate as well as inanimate agency.

* Application of forces result in motion from rest, increase or decrease in speed, change in direction, and distortion of the shape.

* Some forces act only in contact; there are some which can even effect at a distance.

* The motion can be classified according to the path, periodic or non-periodic as well as if the speed is uniform or non-uniform.

Let us enjoy by making a simple spinner. Make it by the following instruction. 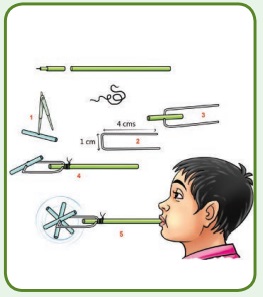 Cut a 2cm long piece from an old ball-pen refill and make a hole in its center with a divider point (Fig 1).

Weave the refill spinner in the U-shaped wire (Fig 3).

Wrap the two ends of the wire on the plastic refill, leaving enough clearance for the spinner to rotate (Fig 4).

On blowing through the refill, the spinner rotates (Fig 5).

For obtaining maximum speed adjust the wires so that air is directed towards the ends of the spinner.

Have you enjoyed with simple spinner. Do you observe the motions in the toy. Can you answer the following question?

1. Motion of the air in tube is linear motion.

You will enjoy this activity also. This will let you to understand how steam engine works.

Play with force and motion. 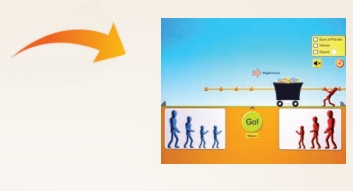 * Lets learn force and motion on PhET in Google browser. Download and install.

* Drag any one side and place him in the knot portion of the rope. Now click go.

* If placed on the right side then the load will move in that direction. The place of the man and the number of man can be changed. The direction of force and the unit of force will display on the screen.

* If we place equal number of men on both the sides the load will not move.

* By changing the number of men the strength of force can be changed.