2. Oscillatory motion among the following is

a. Rotation of the earth about its axis

b. Revolution of the moon about the earth

c. To and fro movement of a vibrating string

Answer: (c) To and fro movement of a vibrating string

3. The correct relation among the following is

4. Gita rides with her father’s bike to her uncle’s house which is 40 km away from her home. She takes 40 minutes to reach there.

Statement 2 : She travels with a speed of 1 km/hour

a. Statement 1 alone is correct.

b. Statement 2 alone is correct.

c. Both statement 1 and 2 are correct.

Answer: (a) Statement 1 alone is correct.

II. Find whether the following statements are true or false. if false give the correct answer

1. To and fro motion is called oscill tory motion. [True]

3. Vehicles moving with varying speeds are said to be in uniform motion. [False]

III. Fill in the blanks

1. A bike moving on a straight road is an example of Linear motion.

2. Gravitational force is a non-contact force.

3. Motion of a potter’s wheel is anexample Rotary of motion.

4. When an object covers equal distances in equal interval of time, it is said to be in uniform motion. 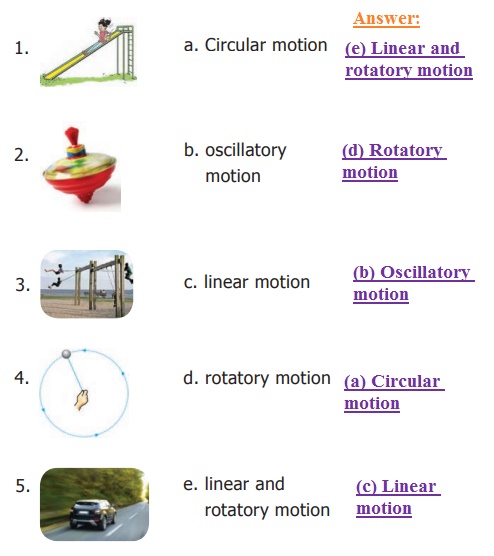 VI Given below is the distance-trav-elled by an elephant across a forest with uniform speed.  Com-plete the data of the table given below with the idea of uniform speed. 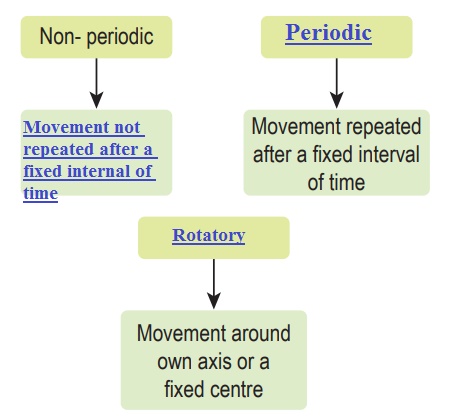 VIII Give one word for the following statements

2. A change in the position of an object with time Motion.

3. The motion which repeats itself after a fixed interval of time Periodic motion.

4. The motion of an object travels equal distances in equal intervals of time Uniform motion.

5. A machine capable of carrying out a complex series of actions automatically. Robot

IX Answer the following in a sen-tence or two

Answer: push or pull action on an animate or inanimate agency is called force.

2. Name different types of motion based on the path.

3. If you are sitting in a moving car, will you be at rest or motion with respect ur friend sitting next to you?

Answer: I am in rest respect to my friend sitting next to me.

4. Rotation of the earth is a periodic motion. Justify.

Answer: For rotation of earth it takes equal interval of time (24 hours) to rotate itself. So it is a periodic motion.

5. Differentiate between rotational and curvilinear motion

Answer: Curvilinear - moving ahead but changing direction, like a throwing ball.

Rotatory -The movement of a body about its own axis, like a rotating top.

1. A vehicle covers a distance of 400km in 5 hour. Calculate its average speed.

1. What is motion? Classify different types of motion with examples.

• Motion: Application of force in an object results in motion from a state of rest. Different-types of motion:

• Linear- moving in a straight line, like a person walking on a straight path, free fall.

• Curvilinear - moving ahead but changing direction, like a throwing ball.

• Circular -moving in a circle, swirling stone tied to the rope.

• Rotatory -The movement of a body about its own axis, like a rotating top.

• Oscillatory -coming back to the same position after a fixed time interval, like a pendulum.

• Zigzag (irregular) - like the motion of a bee or people walking in a crowded street. 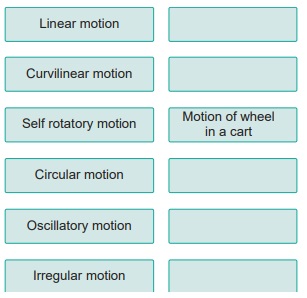 Self rotatory motion -  Motion of wheel in a cart