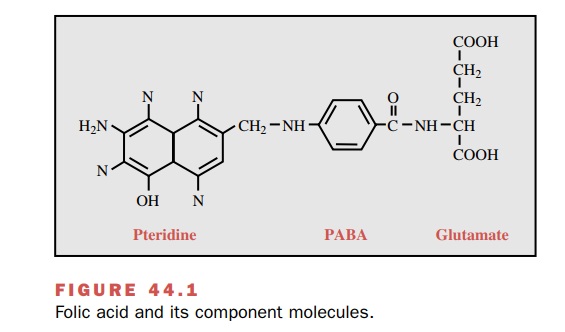 The sulfonamides are a large group of compounds that are structural analogues of p-aminobenzoic acid (PABA).

The sulfonamides are a large group of compounds that are structural analogues of p-aminobenzoic acid (PABA). They differ primarily in the substituents on ei-ther the amido group (SO2-NH-R) or the amino group (-NH2) of the sulfanilamide nucleus. Substitutions on the sulfonamide group modify the drug’s solubility charac-teristics, resulting in congeners with different rates of ab-sorption and excretion. One group of sulfonamides re-mains largely unabsorbed in the gastrointestinal (GI)

tract following oral administration. Sulfadiazine, for ex-ample, produces changes only on local gut bacterial flora and finds wide use in presurgical bowel sterilization. Other sulfonamides, such as sulfisoxazole, are rapidly absorbed and highly soluble, and they undergo rapid uri-nary excretion, mainly in the unaltered form. A third group are rapidly absorbed and slowly excreted and maintain adequate blood levels for up to 24 hours (e.g., sulfamethoxazole). These drugs are useful in treating chronic urinary infections. Finally, some sulfonamides (e.g., sulfacetamide and sulfadiazine [silver salt]) are de-signed for topical use such as in infection of the eye and in burn patients.

Mechanism of Action and Resistance

Both sulfonamides and trimethoprim (not a sulfon-amide) sequentially interfere with folic acid synthesis by bacteria. Folic acid functions as a coenzyme in the transfer of one-carbon units required for the synthesis of thymidine, purines, and some amino acids and con-sists of three components: a pteridine moiety, PABA, and glutamate (Fig. 44.1). The sulfonamides, as struc-tural analogues, competitively block PABA incorpora-tion; sulfonamides inhibit the enzyme dihydropteroate synthase, which is necessary for PABA to be incorpo-rated into dihydropteroic acid, an intermediate com-pound in the formation of folinic acid. Since the sulfon-amides reversibly block the synthesis of folic acid, they are bacteriostatic drugs. Humans cannot synthesize folic acid and must acquire it in the diet; thus, the sulfon-amides selectively inhibit microbial growth. 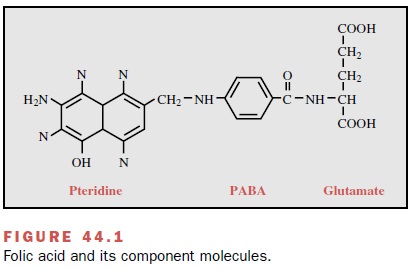 Resistance occurs as the result of one or more alter-ations in the cellular metabolism of the bacteria; both mutation and plasmid-mediated resistance occurs. These changes, which can be irreversible, include alter-ations in the physical or enzymatic characteristics of the enzyme or enzymes that metabolize PABA and partici-pate in the cellular synthesis of tetrahydrofolic acid. The appearance of alternative pathways for PABA synthesis within the bacteria or the development of an increased capacity to inactivate or eliminate the sulfonamide also may contribute to bacterial cell resistance. Bacteria that can use preformed folate are not inhibited by sulfon-amides.

Sulfonamides are usually given orally, although the sol-uble sodium salts can be given parenterally, a route that is infrequently used. Except for compounds designed for local gut effects, the sulfonamides are rapidly ab-sorbed from the intestinal tract, primarily from the small intestine. They can usually be found in serum and urine within 30 minutes after ingestion. Peak serum lev-els are obtained in 2 to 6 hours; urine levels can reach above 500 μg/mL. Although absorption can occur via other routes (e.g., burned and/or abraded skin, stom-ach), the amounts absorbed are usually low and unpre-dictable. A burn area larger than 20% of total body sur-face can absorb enough drug to result in toxicity, especially if accompanied by renal dysfunction.

Systemically absorbed sulfonamides readily distribute throughout body fluids. They pass the placental barrier and enter the cerebrospinal fluid (CSF) even in the ab-sence of inflammation. The degree of protein binding, the half-life, and the drug’s solubility in urine will vary considerably from one sulfonamide to another. Half-lives range from 2.5 to 17 hours, the latter exhibited by sulfadiazine. Sulfadiazine and sulfacetamide tend to have lower protein binding (about 20–30%) than the other major systemic sulfonamides, whose binding ranges from 80 to 90% (e.g., sulfamethoxazole, sulfisox-azole). The effects of high protein binding by a sulfon-amide become almost negligible in body fluids with a paucity of protein (e.g., synovial, peritoneal, ocular); thus, the drug in these sites is primarily in the active un-bound form. Most drugs with protein binding above 30% do not cross the placenta; while this reduces toxic potential, it concomitantly lowers drug antibacterial activity.

The sulfonamides are degraded in the liver by acetyla-tion and oxidation; metabolites have reduced bacterio-logical activity. The parent compound and the metabo-lites are excreted in the urine, primarily by glomerular filtration followed by tubular reabsorption. Some sul-fonamides exhibit diurnal variations in excretion, being three times greater at night than during the day.

Sulfonamides have a long record of successful use in the treatment of a wide range of both gram-positive and gram-negative bacterial infections. They are also active against some of the less frequently encountered in-fections, such as leprosy, malaria, toxoplasmosis, and nocardiosis. Current indications are more limited, espe-cially to the treatment of urinary tract and ear infec-tions, because of frequently encountered resistance and the availability of better and safer agents for infections such as shigellosis, salmonellosis, and meningococcal meningitis. In contrast, the growth of rickettsial organ-isms is actually stimulated.

Sulfadiazine and sulfisoxazole still play a useful role in the prophylaxis of group A streptococcal infections in patients with rheumatic fever who are hypersensitive to penicillin. This is tempered with the potential for toxic-ity and infection with resistant Streptococcus pyogenes.

Trisulfapyrimidine (a combination of sulfadiazine, sulfamerazine, and sulfamethazine), trimethoprim– sulfamethoxazole, or sulfisoxazole can be used as an al-ternative drug for the treatment of melioidosis caused by Pseudomonas pseudomallei and for infections pro-duced by Nocardia spp.

A number of infections caused by Chlamydia tra-chomatis, such as trachoma, inclusion conjunctivitis, pneumonia, and urethritis, can be treated with topical or systemic sulfonamides, although tetracycline or erythro-mycin is preferred.

Sulfonamides, such as sulfadiazine, in combination with pyrimethamine, are considered the treatment of choice of symptomatic toxoplasmosis. Patients should be well hydrated to prevent crystalluria; this problem may be reduced with the use of triple sulfas (trisulfapyrimi-dine). Some regimens have included a sulfonamide (sul-fadoxine) in combination with pyrimethamine (Fansidar) for the treatment of chloroquine-resistant malaria caused by P. falciparum.

Topically active sulfonamides are useful in prevent-ing infections in burn patients. Mafenide acetate(Sulfamylon Cream), the most widely used compound, is effective against P. aeruginosa, an organism that fre-quently colonizes burns. It is less effective against staphylococci, which also colonize burns. Local absorp-tion of the acetate preparation, which is acidic, can re-sult in respiratory alkalosis. Silver sulfadiazine in a 1% cream can be used as an alternative to mafenide and has good activity against gram-negative bacteria.

Sulfacetamide is used topically for treatment of oc-ular infections.

If the concentration of the sulfonamide is sufficiently high and its aqueous solubility is sufficiently low, the free drug or its metabolites may form crystals and cause bleeding or complete obstruction of the kidneys. Combinations of sulfa compounds have been devel-oped for the purpose of lowering the dosage of individ-ual components to reduce the chance of crystalluria (e.g., triple sulfas, such as the trisulfapyrimidines).

The sulfonamides do cause hypersensitivity reac-tions (e.g., rashes, eosinophilia, and drug fever) in a small number of patients. Other rare allergic reactions include vasculitis, photosensitivity, agranulocytosis, and thrombocytopenia. Stevens-Johnson syndrome is also associated with sulfonamide use; it is characterized by fever, malaise, erythema multiforme, and ulceration of the mucous membranes of the mouth and genitalia. Hemolytic anemia may develop in persons with a ge-netic deficiency of red blood cell glucose-6-phosphate dehydrogenase (G6PD).

Sulfonamides compete for sites on plasma proteins that are responsible for the binding of bilirubin. As a re-sult, less bilirubin is bound, and in the newborn, the un-bound bilirubin can be deposited in the basal ganglia and subthalamic nuclei, causing kernicterus, a toxic en-cephalopathy. For this reason, sulfonamides should not be administered to newborns or to women during the last 2 months of pregnancy.

Significant drug–drug interactions are those that po-tentiate the effects of other agents and require dosage modification. These include certain anticoagulants, hy-poglycemic sulfonylureas, and hydantoin anticonvul-sants.