Phencyclidine (PCP) failed its development as a potential general anesthetic agent during the 1950s because of its propensity to cause psychotic episodes during emergence that were sometimes severe and violent, and lasted from hours to days.

Phencyclidine (PCP) failed its development as a potential general anesthetic agent during the 1950s because of its propensity to cause psychotic episodes during emergence that were sometimes severe and violent, and lasted from hours to days. PCP psychosis closely resembles schizophrenia in terms of symptoms, signs and thought disorder. A single very small dose of PCP given to a normal sub-ject induces a psychotic state lasting for several hours, while in a person with schizophernia, the psychosis can be exacerbated for several weeks by the fact that it is easy to synthesize. Many users consumed PCP on a daily or near-daily basis for weeks or months at a time. There were numerous instances of severe medical toxicity, a number of deaths from overdoses, and many cases of prolonged (up to six weeks) psychoses in users without preexisting psychotic disorders. In addition to CNS effects, PCP overdose involves sym-pathomimetic, neuromuscular and renal effects that can result in tis-sue damage and death. These problems are compounded by PCP’s lipophilicity, long half-life and still longer duration of action. The incidence and prevalence of PCP abuse have declined markedly since the late 1970s to early 1980s; however, PCP abuse continues and remains relatively high in certain areas of the USA. PCP exerts its characteristic effects by noncompetitive blockade of the N-me-thyl D-aspartate class of glutamate receptors. Ketmine is a PCP de-rivative that shares PCP’s mechanism of action and is approved for general effects are less frequent and severe owing to the lower po-tency and shorter duration of ketamine action compared with PCP.

As of the year 2000, the highest rates of PCP use during the previous year were observed among 18- to 20-year-olds, followed by 12- to 17-, 21- to 25-, and 26- to 34-year-olds. In 2000, among Americans aged 12 or older, it was estimated that 54 000 had used PCP within the previous month, 264 000 within the previous year and 5 693 000 (2% of the population) within their lifetimes (Substance Abuse and Mental Health Services Administration, 2001). In the same year, PCP ranked 31st among the top 50 drugs mentioned most frequently in drug-related emergency department episodes nationwide show-ing a 48% increase in ER mentions compared with 1999 (Substance Abuse and Mental Health Services Administration, 2002).

event facilitated by intoxication (e.g., homicides, accidents). The various manners of death (such as drowning and being shot by police) reported are consistent with the disorientation and violent aggressive behavior that can be stimulated by PCP (Crider, 1986).

The effects of low-dose PCP administration have been extensively studied in volunteers. In normal subjects single intravenous doses of 0.05 to 0.1 mg/kg induced withdrawal, negativism and in some cases catatonic posturing; thinking processes became concrete, idiosyn-cratic and bizarre in the absence of significant physical or neurologi-cal findings; and drug effects persisted for 4 to 6 hours In contrast to lysergic acid diethylamide (LSD) or amphetamine PCP was noted to induce disturbances in symbolic thinking perception and attention strikingly similar to those observed in schizophrenia. Administra-tion of PCP to schizophrenic subjects caused exacerbation of ill-ness-specific symptoms persisting up to several weeks, suggesting that schizophrenic or preschizophrenic individuals may be at sig-nificantly increased risk of behavioral effects from PCP abuse.

Phenomenology and Variations in Presentation

Physicians must be alert to the wide spectrum of PCP effects on multiple organ systems. Because fluctuations in serum levels may occur unpredictably, a patient being treated for apparently selective psychiatric or behavioral complications of PCP abuse may suddenly undergo radical alterations in medical status; emergency medi-cal intervention may become necessary to avoid permanent organ damage or death. Any patient manifesting significant cardiovascu-lar, respiratory, neurological, or metabolic derangement subsequent to PCP use should be evaluated and treated in a medical service; the psychiatrist plays a secondary role in diagnosis and treatment until physiological stability has been reached and sustained.

PCP-intoxicated patients may come to medical attention on the basis of alterations in mental status; bizarre or violent be-havior; injuries sustained while intoxicated; or medical complica-tions, such as rhabdomyolysis, hyperthermia, or seizures (Bald-ridge and Bessen, 1990). As illicit ketamine use has increased significantly as part of the “club drug” phenomenon, it is impor-tant to remember that ketamine can induce the same spectrum of effects and complications, the chief difference from PCP being the much shorter duration of action of ketamine. 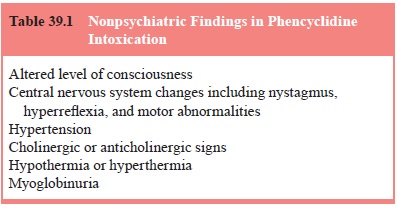 Studies of normal volunteers suggested that the acute psy-chosis induced by a single low dose of PCP usually lasts for 4 to 6 hours (Javitt and Zukin, 1991). However, in some PCP users psy-chotic symptoms including hallucinations, delusions, paranoia, thought disorder and catatonia, with intact consciousness, have been reported to persist from days to weeks after single doses. Sudden and impulsive violent and assaultive behaviors have been reported in PCP-intoxicated patients without previous histories of such conduct.

In PCP intoxication, the central nervous, cardiovascular, respiratory and peripheral autonomic systems are affected to de-grees ranging from mild to catastrophic (Table 39.1). The level of consciousness may vary from full alertness to coma. Coma of variable duration may occur spontaneously or after an episode of bizarre or violent behavior Nystagmus (which may be horizontal, vertical, or rota-tory) has been described in 57% of a series of 1 000 patients (McCarron et al., 1981). Consequences of PCP-induced central nervous system hyperexcitability may range from mildly in-creased deep tendon reflexes to grand mal seizures (observed in 31 of a series of 1 000 PCP-intoxicated patients) or status epilep-ticus (McCarron et al., 1981; Kessler et al., 1974). Seizures are usually generalized, but focal seizures or neurological deficits have been reported, probably on the basis of focal cerebral vaso-constriction (Crosley and Binet, 1979). Other motor signs have been observed, such as generalized rigidity, localized dystonias, facial grimacing and athetosis.

Hypertension, one of the most frequent physical findings, was described in 57% of 1 000 patients evaluated, and it was found to be usually mild and self-limiting, but 4% had severe hypertension, and some remained hypertensive for days (McCarron et al., 1981). Tachycardia occurs in 30% of patients. PCP-induced tachypnea can progress to periodic breathing and respiratory arrest (Hurlbut, 1991). Autonomic signs seen in PCP intoxication may be cholinergic (diaphoresis, bronchospasm, miosis, salivation, bronchorrhea) or anticholinergic (mydriasis, urinary retention). Hypothermia and hyperthermia have been observed (McCarron et al., 1981). Hyperthermia may reach malignant proportions (Thompson, 1979). Rhabdomyolysis frequently results from a combination of PCP-induced muscle contractions and trauma occurring in relation to injuries sustained as a result of behavioral effects. Acute renal failure can result from myoglobinuria.

The disruption of normal cognitive and memory function by PCP frequently renders patients unable to give an accurate history. Therefore, assay of urine or blood for drugs may be the only way to establish the diagnosis. PCP is frequently taken in forms in which it has been used to adulterate other drugs, such as mari-juana and cocaine, often without the user’s knowledge. One of the most recent and alarming manifestations of this phenomenon is a preparation known variously as “illy”, “hydro”, “wet”, or “fry”, consisting of a marijuana cigarette or blunt containing formalde-hyde/formalin (which is advertised) and PCP (which often is not). By disrupting sensory pathways, PCP frequently renders users hypersensitive to environmental stimuli to the extent that physi-cal examination or psychiatric interview may cause severe agita-tion. If PCP intoxication is suspected, measures should be taken from the outset to minimize sensory input. The patient should be evaluated in a quiet, darkened room with the minimal necessary number of medical staff present. Assessments may need to be interrupted periodically.

Vital signs should be obtained immediately on presentation. Temperature, blood pressure and respiratory rate are dose-dependently increased by PCP and may be of a magnitude requiring emergency medical treatment to avoid the potentially fatal complications of malignant hyperthermia, hypertensive cri-sis and respiratory arrest. In all cases, monitoring of vital signs should continue at 2- to 4-hour intervals throughout treatment, because serum PCP levels may increase spontaneously as a re-sult of mobilization of drug from lipid stores or enterohepatic recirculation. Analgesic and behavioral changes induced by PCP not only predispose patients to physical injury but also mask these injuries, which may be found only with careful physical examination.

Because PCP is usually supplied in combination with other drugs and is often misrepresented, toxicological analysis of urine or blood is essential. However there may be circumstances in which PCP may not be detected in urine even if it is present in the body, for example, when the urine is alkaline. On the other hand, in chronic PCP users, drug may be detected in urine up to 30 days after last use (Simpson et al., 1982–1983). It must be kept in mind that false-positive PCP results can be caused by the presence of venlafaxine and O-desmethylvenlafaxine (Sena et al., 2002), or dextromethorphan (Shier, 2000). Urine should be tested for heme because of the possible complication of myoglobinuria.

The presence of nystagmus and hypertension with mental status changes should raise the possibility of PCP intoxication. Because of the close resemblance of both the acute and the prolonged forms of PCP psychosis to schizophrenia, and the increased sen-sitivity of patients with schizophrenia to the psychotomimetic ef-fects of the drug, an underlying schizophrenia spectrum disorder should be considered, particularly if paranoia or thought disorder persists beyond 4 to 6 weeks after last use of PCP. PCP psycho-sis may also resemble mania or other mood disorders. Robust response of psychotic symptoms to treatment with neuroleptics would favor a diagnosis other than simple PCP psychosis.

PCP psychosis is readily distinguishable from LSD psy-chosis in normal as well as in individuals with schizophrenia by the lack of typical LSD effects, such as synesthesia. In cases involving prominent PCP-induced neurological, cardiovascular, or metabolic derangement, encephalitis, head injury, postictal state and primary metabolic disorders must be ruled out. Either intoxication with or withdrawal from sedative–hypnotics may be associated with nystagmus. Neuroleptic malignan at syndrome should be ruled out in the differential diagnosis of PCP-induced hyperthermia and muscle rigidity.

As drug levels decline, the clinical picture recedes in five to 21 days through periods of moderating neurological, autonomic and metabolic impairments to a stage at which only psychiatric impairments are apparent. Once the physical symptoms and signs have cleared the period of simple PCP psychosis may last 1 day to 6 weeks, whether or not neuroleptics are administered, during which the psychiatric symptoms and signs abate gradually and progressively. Even after complete recovery flashbacks may oc-cur if PCP sequestered in lipid stores is mobilized. Any underly-ing psychiatric disorders can be detected and evaluated only after complete resolution of the drug-induced psychosis.

The hierarchy of treatment goals begins with detection and treatment of physical manifestations of PCP intoxication. Equally important are measures to anticipate PCP-induced impulsive, violent behaviors and provide appropriate protec-tion for the patient and others. The patient must then be closely observed during the period of PCP-induced psychosis, which may persist for weeks after resolution of physical symptoms and signs. Finally, the possibly dramatic medical and psychiat-ric presentation and its resolution must not divert the attention of the psychiatrist from full assessment and treatment of the patient’s drug-seeking behavior.

In contrast to psychotic states induced by drugs such as LSD, in which “talking the patient down” (by actively distracting the pa-tient from his LSD-induced sensory distortions and convincing the patient that his or her distress stems from nothing more than the temporary effects of a drug that soon will wear off) may be highly effective, no such effort should be made in the case of PCP psychosis, particularly during the period of acute intoxication, because of the risk of sensory overload that can lead to dramati-cally increased agitation. The risk of sudden and unpredictable impulsive, violent behavior can also be increased by sensory stimulation.

There is no pharmacological competitive antagonist for PCP. Oral or intramuscular benzodiazepines are recommended for agitation. Neuroleptics usually have little or no effect on acute or chronic PCP-induced psychosis or thought disorder. Because they lower the seizure threshold, neuroleptics should be used with caution. Physical restraint may be lifesaving if the patient’s behavior poses an imminent threat to his or her safety or that of others; however, such restraint risks triggering or worsening rhabodomyolysis.