This reviews the disorders of deliberately inhaling large quantities of volatile solvents and gases for minutes to hours, most often repeatedly over days, months and frequently for many years.

This reviews the disorders of deliberately inhaling large quantities of volatile solvents and gases for minutes to hours, most often repeatedly over days, months and frequently for many years. This is reffered to as inhalant disorders in DSM-IV. The most frequently chemicals now present in the products that are abused include toluene, butane, nitrous oxide, gasoline mixtures (including hexane and benzene), different chlorocarbons such as trichloroethylene, fluorocarbons and organic nitrites. Acute symptoms include: dizziness, headache, disorientation, ataxia foul breath, with conditions proceeding to nausea, slurred speech, belligerence, irritability and delirium. Chronic conditions are characterized by a strong psychological, but weaker physical de-pendence, without any known dually diagnosed mental disorder. Known associated physical disorders include cognitive dysfunc-tion, limb dysmetria, hearing loss, arrhythmia, metabolic acido-sis, peripheral neuropathies, hematologic abnormalities, signifi-cant embryopathic changes, and some liver and lung changes.

Several subcategories of inhalants can be established based on chemical classes of products and primary abuse groups as fol-lows: 1) industrial or household cleaning and paint-type solvents including paint thinners or solvents, degreasers or dry cleaning solvents, solvents in glues, art or office supply solvents such as cor-rection fluids, and solvents in magic markers (gasoline is similar to these products); 2) propellant gases used in household or commer-cial products, such as butane in lighters, or fluorocarbons in elec-tronic (personal computer, office equipment) cleaners or refriger-ant gases; 3) household aerosol sprays such as paint, hair and fabric protector sprays; 4) medical anesthetic gases such as ether, chloro-form, halothane and nitrous oxide; and 5) aliphatic nitrites. Nitrous oxide is also available in whipped cream dispensers (e.g., whippets) and for octane boosters in car racing, and is used outside the medi-cal theater by nonprofessionals. Most of the foregoing compounds affect the central nervous system (CNS) directly, whereas nitrites act on cardiovascular smooth muscle rather than as an anesthetic in the CNS. The nitrites are also used primarily as sexual enhanc-ers rather than as mood alterants. Therefore, when discussing “in-halant abuse,” we will be referring primarily to substances other than nitrites. One item worthy of note: the exclusion of anesthetics from the inhalant-related disorders section in the Diagnostic and Statistical Manual of Mental Disorders, Fourth Edition (DSM-IV-TR) is not medically correct, as almost all of the inhalants act physiologically as would any anesthetic and some, particularly the anesthetics nitrous oxide and trichloroethylene (TCE), are abused by the primary inhalant abuser discussed herein.

Many anesthetics have a potential for abuse, mostly by medical personnel. That these substances are abused by middle-class professionals not only demonstrates the diversity of the groups that abuse inhalants but also focuses on the basic nature of the physical properties of most of these volatile agents. That is, many anesthetics produce a light-headedness that relates to euphoria. Almost all solvents would produce anesthesia if suf-ficient amounts are inhaled with the proper amounts of oxygen present. As with any anesthetic, death is possible and too often occurs with these substances.

Dependence on inhalants is primarily psychological, with a less dramatic associated physical dependence occurring in some heavy users. There is at least a psychological dependence and often a weak physical dependence on these substances. A mild withdrawal syndrome occurs in 10 to 24 hours after cessation of use (only in those who have excessively abused inhalants) and lasts for several days. Symptoms include general disorientation, sleep disturbances, headaches, muscle spasms, irritability, nau-sea and fleeting illusions. However, this is not an easily identi-fied or a characteristic withdrawal syndrome that is useful for many practitioners in a clinical setting. The need to continue use is undeniably strong in many individuals; specific treatments for inhalant dependence, other than the drug therapy and/or psycho-therapy used for other drug dependence, need to be developed.

Abuse of inhalants may lead to harm to individuals (e.g., ac-cidents involving automobiles, falling from buildings when in an impaired or intoxicated state [illusionary feelings], or self-inflicted harm such as attempted or successful suicide). Frozen lips caused by rapidly expanding gases or serious burns may also occur. Chronic inhalant use is often associated with familial con-flict and school problems.

The primary disorder is inhalant intoxication, which is char-acterized by the presence of clinically significant maladap-tive behavioral or psychological changes (e.g., belligerence, assaultiveness, apathy, impaired judgment, impaired social or occupational functioning) that develop during the intentional short-term, high-dose exposure to volatile inhalants (diagnostic criteria A and B in DSM-IV-TR). The maladaptive changes oc-curring after intentional and nonintentional exposure include disinhibition, excitedness, light-headedness, visual distur-bances (blurred vision, nystagmus), incoordination, dysarthria, an unsteady gait and euphoria. Higher doses of inhalants may lead to depressed reflexes, stupor, coma and death, sometimes caused by cardiac arrhythmia. Lethargy, generalized muscle weakness, and headaches may occur some hours later depend-ing on the dose.

Inhalant abuse is a worldwide problem. Countries are increas-ingly evaluating the abuse of solvents.

Current estimates of sniffing volatile substances to “get high” rank inhalants high in the “ever use” category of substance abuse, especially for the younger population. Some surveys of teenage use showed that one in six had tried an inhalant and that over 220 000 persons of the US population had done so in the past month during the year 2000 (Substance Abuse and Mental Health Services Administration, 2001). As many as 20 000 to 40 000 youth got high on inhalants several times a month. Some of the highest rates were noted for 8th graders. The practice of “sniffing”, “snorting”, “huffing”, “bagging”, or inhaling to get high describes various methods of inhalation. These terms refer to the inhalation of volatile substances from 1) filled balloons, 2) bags and 3) soaked rags and/or sprayed directly into oral orifices. Abusers can be identified by various telltale clues such as organic odors in the breath or clothes, stains on the clothes or around the mouth, empty spray paint or solvent containers, and other unusual paraphernalia. These clues may enable one to identify a serious problem of solvent abuse before it causes serious health problems or death.

The majority of inhalant abusers are never seen in a hospital or outpatient facility. Although many do not need medical attention for their inhalant habit, of those who do, many often die before reaching the hospital as a result of asphyxia, cardiac arrhythmia, or related overdose effects after inhaling fluorocarbons, low-mo-lecular-weight hydrocarbon gases (butane, propane), nitrous ox-ide, or other solvents including toluene during either the first or a subsequent episode. Death may also occur after inhalation of toluene-containing substances as a result of metabolic acidosis or related kidney failure if left untreated.

Chronic high-level exposure to organic solvents occurs in the in-halant abuse setting at levels several thousand times higher than in the occupational setting and results in numerous irreversible disease states. Table 41.1 describes several well-characterized disorders and identifies the solvent when corroborated by animal studies. Some substances have been strongly correlated with the development of a disorder through numerous case studies. 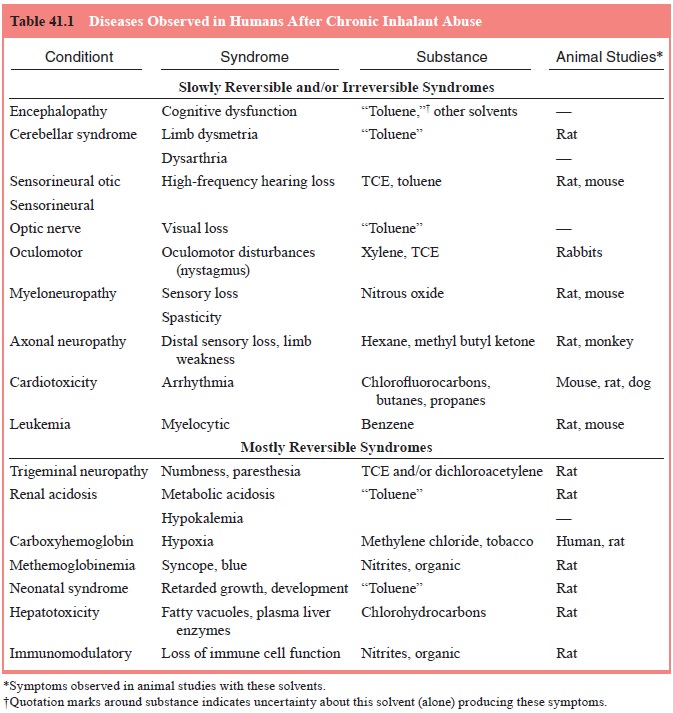 Individuals need different treatments based on the severity of the dependence and any medical complications. Primary care physi-cians should address the medical issues identified earlier as well as other medical concerns before dealing with the dependence on solvents and other drugs. During this period, sedatives, neu-roleptics and other forms of pharmacotherapy are not useful in the treatment of inhalant abusers and should be avoided in most cases as they are likely to exacerbate the depressed state. Once it is determined that the individual is detoxified, that is, has low levels of solvent or other depressant drug, then therapy with other drugs, such as antianxiety drugs, may be useful. The determina-tion of detoxification, even in the absence of drug (solvent) ad-ministration, is not well defined or systematic. It may take several days for the major “reversible” intoxication state to be reduced to a level at which coherent cognition can occur. The use of various psychological assessment tools can assist not only in evaluating the intoxication but also in following the progress of the treat-ment. Little can be done during this period other than to facili-tate improvement of the basic health of these individuals, provide supportive care and build the individual’s self-esteem.

The inhalant abuser typically does not respond to usual drug rehabilitation treatment modalities. Several factors may be involved, particularly for the chronic abuser who may have sig-nificant psychosocial problems as well as irreversible brain in-jury. Treatment becomes slower and progressively more difficult when the severity of brain injury worsens as abuse progresses through transient social use (experimenting in groups) to chronic use in isolation. For these and other reasons, longer therapies are necessary than are utilized in most drug treatment facilities. Also, neurological impairment, the breadth of which still needs to be established, may be a major complication slowing the prog-ress of rehabilitation. This is not as significant a problem with other forms of drug abuse.

Drug screening would be useful in monitoring inhalant abusers. Routine urine screening for hippuric acid (the major metabolite of toluene metabolism) performed two or three times weekly can detect the high level of exposure to toluene com-monly seen in inhalant abusers. More frequently performed ex-pired breath analysis for toluene or other abused compounds is also available. As alcohol is a common secondary drug of abuse among inhalant abusers, alcohol abuse should be monitored and considered in the approach to treatment.