Lungfishes, commonly referred to as “dipnoans” because of their two methods of breathing, are well represented in the fossil record on all major continents, including Antarctica.

Lungfishes, commonly referred to as “dipnoans” because of their two methods of breathing, are well represented in the fossil record on all major continents, including Antarctica. They arose early in the Devonian and were widespread and diverse until the Late Triassic. Today, they are represented by three genera that date back to the Cretaceous, with six remaining species in South America, Africa, and Australia. All extant lungfishes occupy freshwater habitats, although most of the 60 described fossil genera were marine. Lungfishes possess a mosaic of ancestral and derived traits that initially clouded their taxonomic position (Conant 1987). The South American species, Lepidosiren paradoxa, reveals in its specific name some of the confusion its mixture of traits must have caused.

It was first described in 1836 and thought to be a reptile because of the structure of its lung and the placement of the nostrils near the lip. An African species, Protopterus annectens, was discovered the next year and proclaimed to be an amphibian based on its heart structure. Both species were very different from fossil lungfishes and relationships between extant and extinct forms were not obvious. After about 30 years of debate, the systematic position of lungfishes among the Sarcopterygii was generally accepted, with recognition that lungfishes had “singularly embarrassed taxonomists” (Duvernoy 1846, in Conant 1987). Ironically, recent cladistic analyses indicate that tetrapods are another subclass within the Sarcopterygii, i.e., a “divergent sideline within the fishes”. This makes lungfishes in fact phylogenetically closer to tetrapods – and hence to amphibians – than to most other bony fishes.

A general and distinctive characteristic of lungfishes is the existence and location of massive toothplates. Teeth are not attached to the jaw margins as in most other living fishes, but instead occur only on interior bones (Bemis 1987). These toothplates are often quite large and apparently function in crushing aquatic insects, crustaceans, and particularly mollusks; the toothplates are better developed in the Australian than in the South American and African species. It is the toothplates that most commonly fossilize and which form the basis of much of our understanding of evolution in the group (see Fig. 11.12). 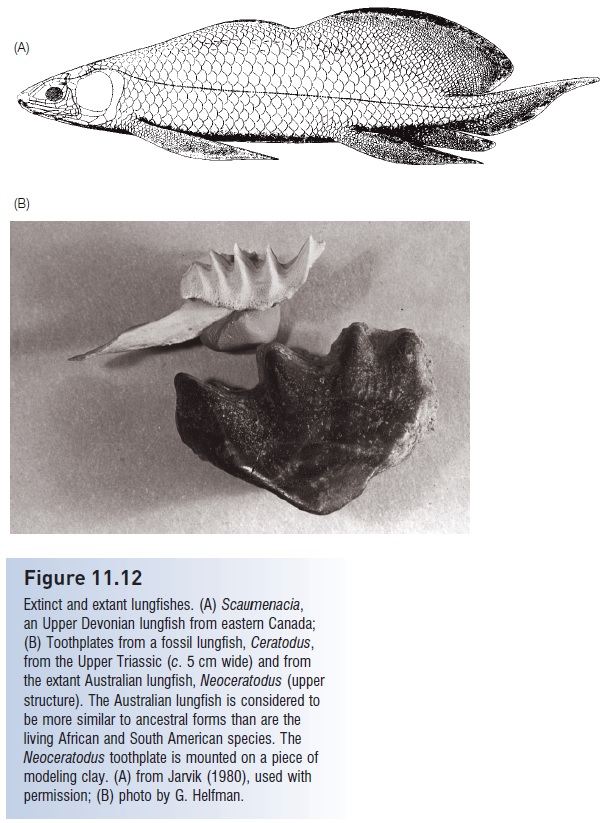 The living African and South American lungfishes are placed in the families Lepidosirenidae and Protopteridae (Fig. 13.10A–C). The four African species of the genus Protopterus are widely distributed through Central and South Africa, occurring in both lentic (still) and lotic (flowing) habitats of major river systems, including a variety of swamp habitats (Greenwood 1987). Maximum sizes range from 44 cm (Protopterus amphibius) to 180 cm (P. aethiopicus). Young fishes are active by night, adults by day, and food includes a variety of hard-bodied invertebrate taxa, with mollusks predominating (Bemis 1987). Protopterids are obligate air breathers throughout their postjuvenile life, obtaining 90% of their oxygen uptake via the pulmonary route. 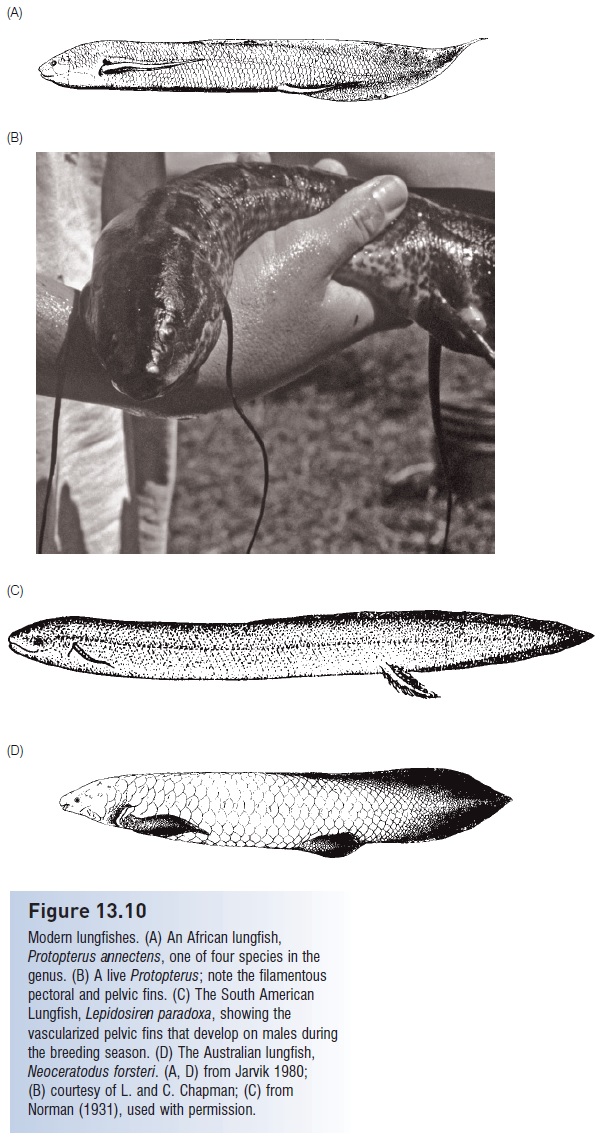 Modern lungfishes. (A) An African lungfish, Protopterus annectens, one of four species in the genus. (B) A live Protopterus; note the filamentous pectoral and pelvic fins. (C) The South American Lungfish, Lepidosiren paradoxa, showing the vascularized pelvic fins that develop on males during the breeding season. (D) The Australian lungfish, Neoceratodus forsteri. (A, D) from Jarvik 1980; (B) courtesy of L. and C. Chapman; (C) from Norman (1931), used with permission

African lungfishes are best known for their ability to survive desiccation of their habitats during the African dry season. Suchestivation behavior, as described for P. annectens, involves construction of a subterranean mud cocoon (Greenwood 1987). As water levels fall, the lungfish constructs a vertical burrow by biting mouthfuls of mud from the bottom, digging as deep as 25 cm into the mud. As the swamp dries, the lungfish ceases taking breaths from the water surface, coils up in the burrow with its head pointing upwards, and fills the chamber with secreted mucus. This mucus dries, forming a closely fitting cocoon, and the fish becomes dormant (Fig. 13.11). This dormant period normally lasts 7 or 8 months, but can be extended experimentally for as much as 4 years inP. aethiopicus. During estivation, lungfish rely entirely on air breathing, the heart rate drops, they retain high concentrations of urea and other metabolites in the body tissues, metabolize body proteins, and lose weight. With the return of rains, the lungfish emerges from the burrow and resumes activity, which includes cannibalizing smaller lungfish that have also just emerged from their burrows. 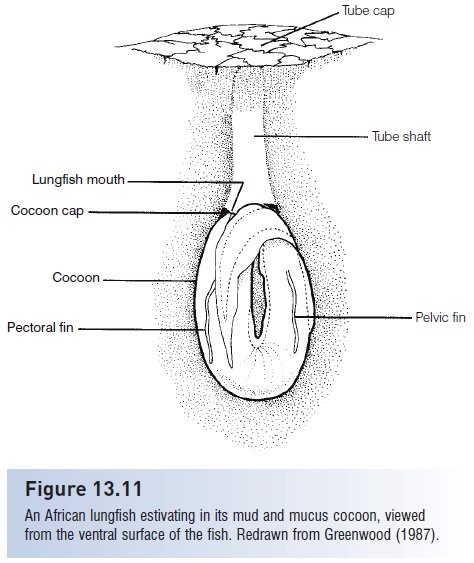 An African lungfish estivating in its mud and mucus cocoon, viewed from the ventral surface of the fish. Redrawn from Greenwood (1987).

African lungfishes build burrow-shaped nests, often tunneling into the swamp bottom or bank. Eggs and young are guarded by one parent, presumably the male. The male has no specialized structures to aid in oxygenating the water in the nest as reported forLepidosiren (see below), although male P. annectens have been observed “tail lashing” near the nest, which may serve the same purpose. Young African lungfishes have external gills (Fig. 13.12), one of the traits that caused many 19th century biologists to consider them amphibians. 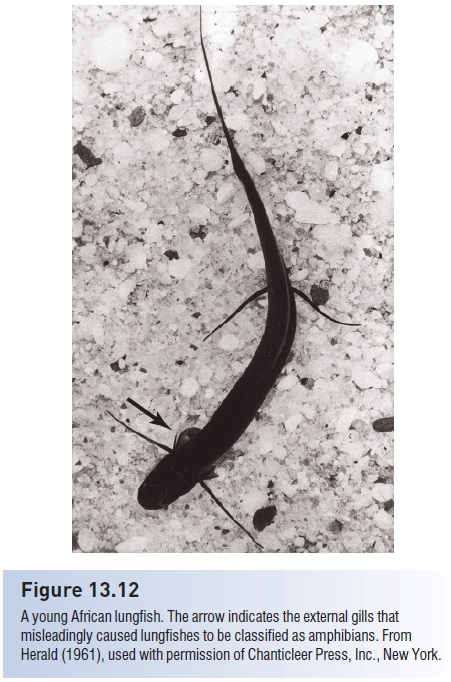 A young African lungfish. The arrow indicates the external gills that misleadingly caused lungfishes to be classified as amphibians. From Herald (1961), used with permission of Chanticleer Press, Inc., New York.

The South American species, L. paradoxa (see Fig. 13.10C), is considered to be the most recently derived member of the family (Greenwood 1987). Surprisingly little is known of its natural history compared to the African and Australian species. It occurs in swampy regions of the Amazon and Parana river basins (Thomson 1969a) and grows to about 1 m in length. As with Protopterus, adults have reduced gills and are obligate air breathers. Estivation in burrows occurs but is poorly documented. Lepidosiren is best known for its reproductive behavior, although conjecture exceeds information. Eggs are deposited in a burrow nest as in Protopterusand guarded by the male. During the breeding season, after egg deposition, the male’s pelvic fins develop vascularized filaments, in apparent response to increased testosterone levels in the male’s bloodstream (Cunningham & Reid 1932; Urist 1973). These sexually dimorphic structures are purportedly used to supplement the respiratory needs of the young in the burrow, although actual behaviors and measurements during breeding have yet to be detailed. Young lepidosirenid lungfishes are not obligate air breathers, a trait that may reduce their exposure to a variety of predators while they are small and exceedingly vulnerable.

The Australian species, Neoceratodus forsteri (Fig. 13.10D) was the last lungfish to be described scientifically, in 1870. It has a very limited native distribution, restricted primarily to the Burnett, Fitzroy, and Mary river systems of northeastern Australia, with transplanted populations in the Brisbane River and several small reservoirs (Kemp 1987; Pusey et al. 2004). Among living lungfishes,Neoceratodus is closest to the ancestral forms in many anatomical respects, including a large (up to 150 cm long), relatively stout body (to 20 kg); large cycloid scales covering the entire body; fl ipperlike “archipterygial” fins; a pectoral fin inserted low on the body; a broad diphycercal tail; and a single lung. Fossilized toothplates undistinguishable from those belonging to N. forsteri have been found in Early Cretaceous deposits of New South Wales, indicating the species is at least 140 million years old. This makes Neoceratodus not only the oldest living lungfish but perhaps “the world’s oldest living vertebrate species” .

Neoceratodus feeds in the late afternoon and maintains activity during the night, capturing benthic crustaceans, mollusks, and small fishes that it crushes with its distinctive toothplates. It is able to locate live animals by detecting the electric field emitted by the prey, adding it to the list of primitive fishes that are highly electrosensitive. Unlike the South American and African species, Neoceratodusis a facultative air breather that relies on gill respiration under normal circumstances. Its lung may in fact serve more as a hydrostatic than a respiratory organ (Thomson 1969a). Uptake of oxygen through the skin occurs, at least in juveniles. No special adaptations to avoid desiccation have been observed, and the fish must be kept moist and covered by wet vegetation or mud to survive out of water.

Sexes show only slight dimorphic coloration during the breeding season and are otherwise indistinguishable. In the native riverine habitat, spawning is rather unspecialized, involving deposition of eggs on aquatic plants in clean, flowing water at any time of the day or night. Fish spawn in pairs, when females deposit 50–100 eggs per spawning; no parental guarding occurs. Development of the young is direct and gradual, with no obvious larval stages or distinct metamorphosis. Young are born without external gills. Maturation does not occur until fish are 15–20 years old, and specimens in captivity in public aquaria have lived at least 65–70 years.

As a result of spawning and nursery habitat destruction brought about by impoundment construction, pollution, and perhaps interactions with introduced species, Neoceratodus populations have declined in some areas. The lungfish was granted Vulnerable status in 2003 under Australia’s federal Environment Protection and Biodiversity Conservation Act. Fish have been transplanted into several Queensland rivers and reservoirs to aid the species’ recovery.