Strychnine is the principal alkaloid in the strychnos plant (seeds), and is a powerful spinal stimulant. 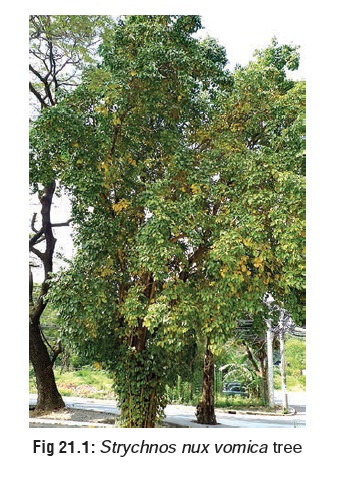 ·              Fruits are globular (Fig 21.2) and contain greyish brown disc-shaped seeds about an inch in diameter and ¼ inch thick, which are slightly concave on one side and convex on the other (Fig 21.3). The pericarp is very tough. The outer surface is satin-like due to innumerable fine, silky hairs. While the seeds are odourless, they are extremely bitter to taste.* 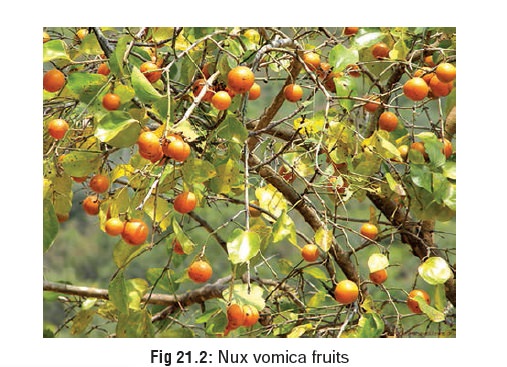 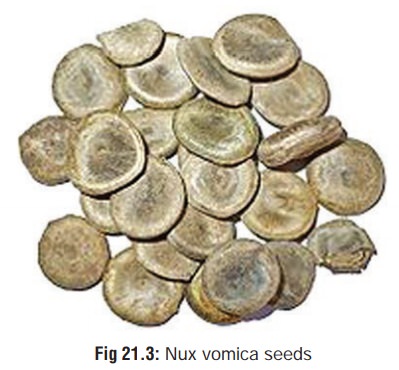 ·              The main alkaloid strychnine has been in use as a rodenti- cide since the 16th century. It is sometimes used for killing stray dogs (hence the name “dog buttons”).

·              Strychnine and brucine are the principal alkaloids, of which the former is much more powerful. It is a basic alkaloid and can be extracted from the seeds as an odourless, bitter-tasting, white crystalline material.

·              Strychnine prevents the uptake of glycine at inhibitory synapses, especially in the ventral horns (anterior horn cells) of the spinal cord. It results in the competitive antagonism of the inhibitory neurotransmitter at the post-synaptic spinal cord motor neuron. There is a net excitatory effect, and minimal sensory stimulation can set off powerful muscle contractions.

·      A feeling of apprehension and anxiety is a common prodromal manifestation.

·      Muscle twitching, spasms, followed by overwhelming convulsions (each lasting from 30 seconds to 2 minutes) which are precipitated by minimal external stimuli.

·      Opisthotonus is a characteristic feature. It is due to powerful extensor spasm causing the body to be hyperextended with arching of the back (Fig 21.4). Less commonly, empros-thotonus (forward bending) and pleurosthotonus (lateral bending) are seen. 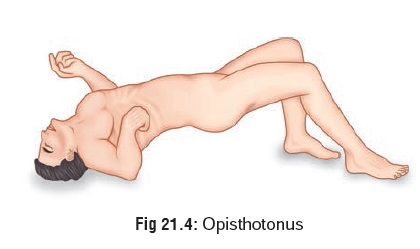 ·      Trismus (lockjaw), risus sardonicus (sardonic smile due to grimacing that results from facial muscle spasm) (Fig 21.5). There may be frothing from the mouth. Pupils are usually dilated. 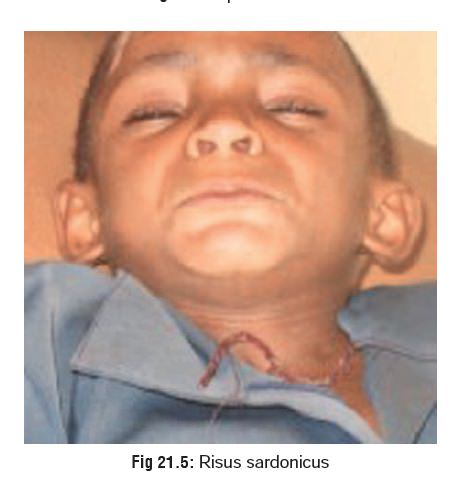 ·      An important diagnostic feature is that there is complete muscle relaxation in between spasms and convulsions.

·              Another feature of significance is that the patient maintains a clear sensorium during and between convulsive episodes.

·      The usual fatal event is respiratory failure consequent to spasm of respiratory muscles. Prognosis for recovery improves if the patient survives beyond 5 hours.

·      Induction of emesis is contraindicated, since vomiting may precipitate severe convulsive episodes.

·      Cautious stomach wash with full protection of airway may be done in the absence of convulsions. Activated charcoal should be administered both prior to and following gastric lavage, and is said to be very beneficial.

·      Forced diuresis and dialysis are not advisable.

·      External stimuli should be reduced to the barest minimum.

·      The key to successful management involves aggressive control of convulsions. Diazepam can be tried first, and may have to be administered in large doses (up to, or more than 1 mg/ kg). Lorazepam is a good alternative. If benzodiazepines are ineffective, barbiturates can be administered (e.g. pentobarbi-tone). Intractable convulsions may necessitate neuromuscular blockade with pancuronium (0.04 to 0.1 mg/kg).

·              Strychnine has always had (a mostly unjustified) reputation of being the homicidal poisoner’s choice for murder. This myth has been propagated in popular detective fiction by writers such as Agatha Christie. In reality, strychnine has been uncommonly employed in murder owing to various obvious reasons: bitter taste, dramatic nature of symptoms (that will always arouse suspicion of foul play), and easy detectability in body fluids and tissues. However, occasional cases do get reported from time to time.

·              Accidental poisoning can result in children who chew on the seeds out of curiosity while playing or foraging in the countryside.

·              Previously, therapeutic misadventures used to be fairly common when strychnine was an approved constituent of various over-the-counter tonics and cathartics. Even today, certain indigenous medicinal preparations (including Ayurvedic preparations) do contain significant concentra- tions of strychnine or brucine.